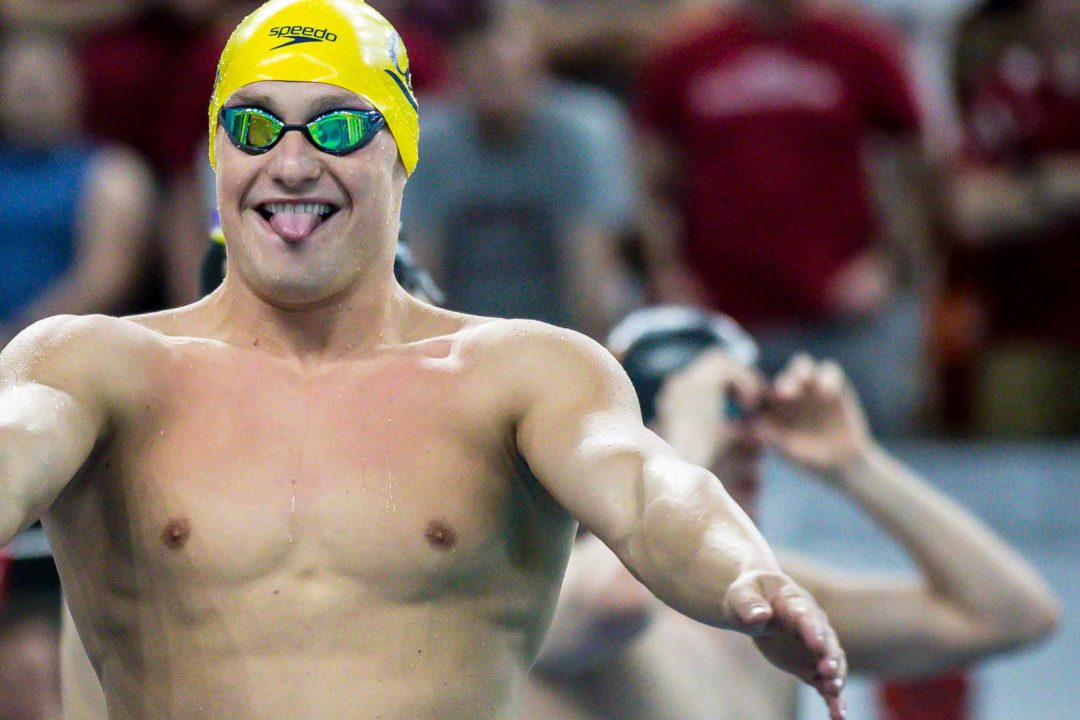 Cal's Andrew Seliskar has always been a versatile force to be reckoned with, but until 2 days ago, he had never won an individual NCAA title. Current photo via Jack Spitser/Spitser Photography

Read on for a preview of a few of the exciting races to watch in tonight’s finals. For a full recap of this morning’s prelims, click here.

Cal’s Andrew Seliskar has always been a versatile force to be reckoned with, but until 2 days ago, he had never won an individual NCAA title. That all changed when Seliskar raced to the #2 all-time performance in the 200 IM, winning the event and missing Caeleb Dressel’s American Record by just a hundredth. He made it 2 individual wins in a row last night as he dethroned Texas’ Townley Haas and won the 200 free. Tonight’s he’ll go up against defending champion Ian Finnerty of Indiana in the 200 breast. Finnerty won the 100 breast last night with the 2nd ever sub-50 swim.

After winning in Pool Record fashion and becoming the 2nd man ever under 44 in last night’s 100 back, Harvard’s Dean Farris is the man to beat in the 100 free. In prelims, Farris swam to #5 all-time with a new Pool Record of 41.00. A number of men could challenge, including Cal’s 50 free champ Ryan Hoffer, the 10th fastest ever. Indiana’s Zach Apple, who split sub-41 to anchor his 400 medley relay to victory, will also be in the mix, as will Alabama’s U.S. Open champion Robert Howard. This could end up being a close one as Minnesota’s Bowe Becker and Texas freshman Daniel Krueger were under 41.5 in prelims.

KATZ LOOKS FOR FIRST POINTS IN 200 BACK

Texas’ Austin Katz, the defending 200 back champion, will be scoring his first individual points tonight. Katz, who was an All-American in the 100 back last season, missed out on the scoring heats here in the 100. He did swim a best time leading off the 400 medley relay, however, so he could have a big 200 back in store. Katz will be up against senior teammate John Shebat, the 2017 and 2018 runner-up in this event and the 3rd fastest man ever in the event. Katz is currently #4 all-time. Cal’s Bryce Mefford is another returning finalist to look out for.

Upvote if Seliskar should be swimmer of the meet.
Down vote for Farris.

depends on 200 breast for me

Wouldn’t a 6th place finish rule Dean Farris out of the swimmer of the meet competition?

Am I crazy or does Dean Farris look like Scut Farkus from Christmas story?

Anyone else loving this picture of seli?