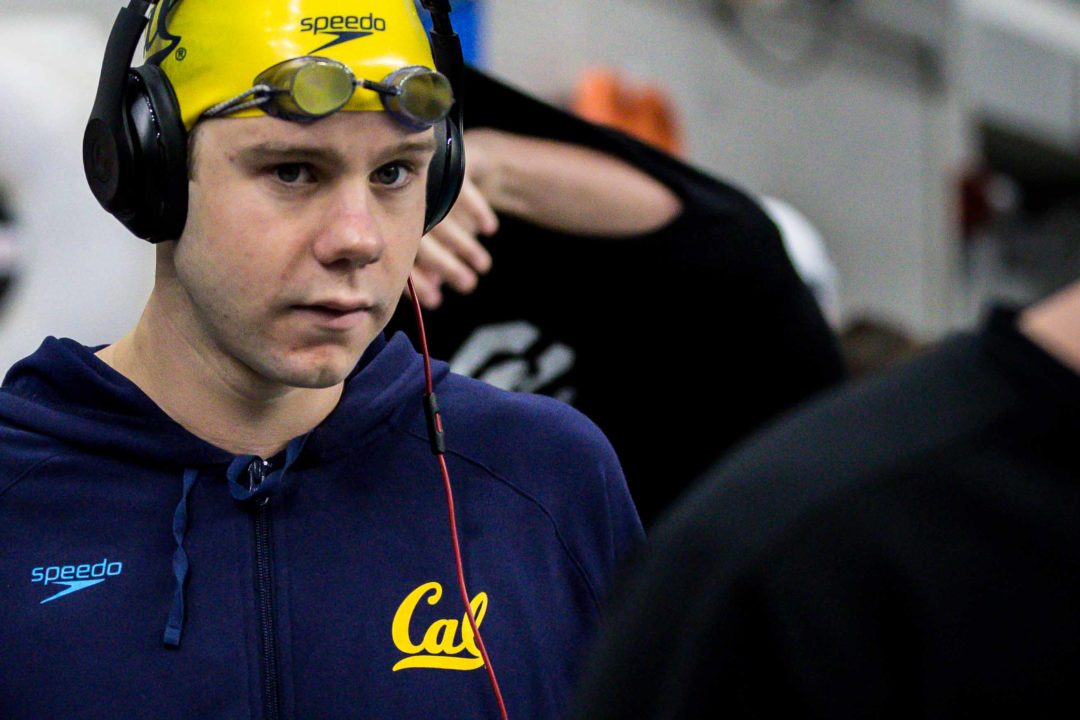 Sophomore Sean Grieshop already has a pair of top two finishes for Cal, and he appears likely to improve on his 11th-place finish from last year when he swims the 1650 in this afternoon's heats. Current photo via Jack Spitser/Spitser Photography

The final day of the 2019 Men’s NCAA Division I Swimming & Diving Championships is a little different from the others in that it’ll feature afternoon heats of the 1650 in between prelims and tonight’s 6:00pm finals session.

There will be five heats total of the mile. The last one heat will consist of the top 8 seeds and will kick off the main finals session, while the first five heats will take place over roughly an hour starting at 4:05pm. As this a timed finals event, competitors can score from any heat.

We’ll keep you updated on the heat winners, and keep a running tab on times that are likely to show up in the top (rough 14:40 or better, based on last year).

In the first heat, Logan Hotchkiss of UCSB was leading for much of the race, but eventually  Matthew Otto of Virginia overtook him as the race reached its later stages. NC State’s Gil Kiesler appeared to be closing on Otto over the final 100, but Otto was able to hold off Kiesler and win the heat, 14:57.49 to 14:57.71.

Georgia’s Walker Higgins jumped out to an early lead during the 2nd heat. USC’s Victor Johannson moved up and led at the 500, but Higgins reestablished control and led the rest of the way. He easily won with a time a 14:39.52, which would’ve put him in the top eight last year. Johannson took 2nd in 14:43.21, followed by UVA’s Sam Magnan in 14:50.70.

Cal sophomore Sean Grieshop has had a pair of top-two finishes already this week, so we figured we might in store for something big from him this afternoon. Sure enough, he jumped out to an early lead in heat 4 and never looked back. He had almost a 3-second lead around the 900 and stayed about that far ahead of the rest of the field for the remainder of the race. He ultimately touched in 14:35.82, easily the top time of the afternoon and a time that would’ve placed 4th overall last year.

Most of the rest of the field appeared to be in contention for 2nd place at one point or another.  Marcelo Acosta of Louisville was the one constant throughout the race, while several others dropped off or moved up as the race progressed. In the end, he held off a charging True Sweetster of Stanford, and Acosta took 2nd, 14:38.92 to 14:39.07, with both those times joining Grieshop’s time as the top three of the afternoon, heading into the final heat.

Logan Hotchkiss is not from Georgia.

He is from UCSB.

Did we notify New York that the mile started?

The Texas misery continues. Zettle dead last in his heat. He added 37 seconds. Eddie can’t wait for this nightmare to end.

Make that Mike Bottom & Eddie cant wait for this nightmare to end!

Yea honestly a number of teams haven’t looked that great

Auboeck has been awful and would expect it to continue in mile. Gotta be something wrong. Sick?

I agree, I wish they would interview Bottom & address this issue about what happened???