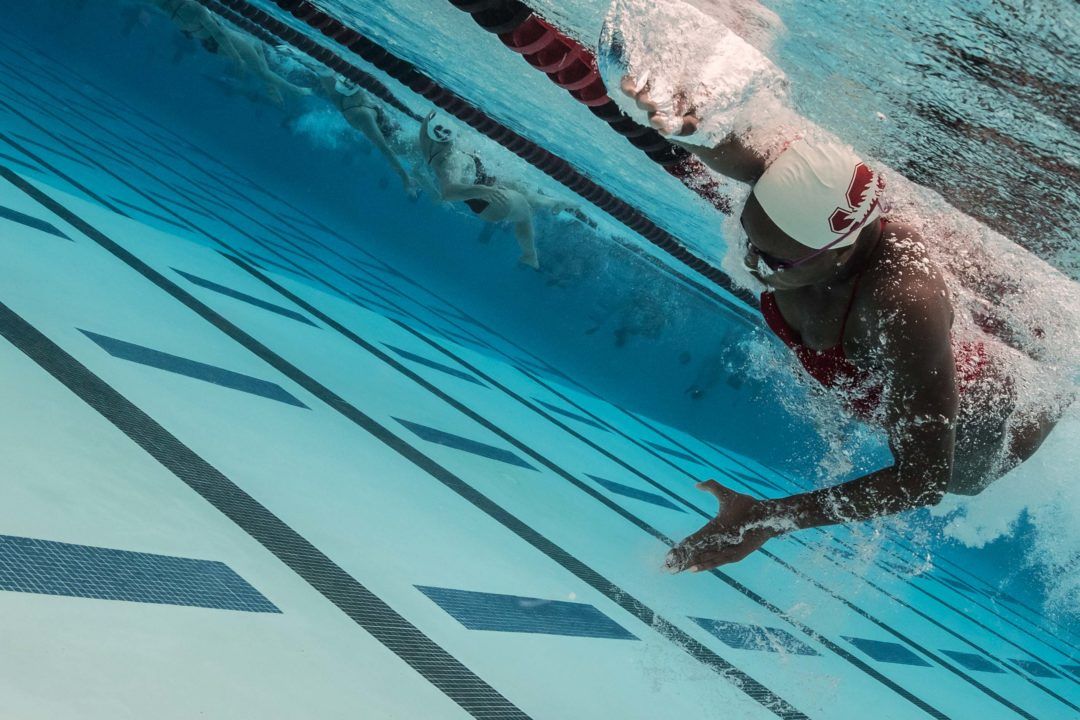 The NCAA Championships will pit the American Record holder, Abbey Weitzeil, against the reigning NCAA champion and NCAA Record holder, Stanford’s Simone Manuel, in the 50 free. One of the main questions concerning this race heading into the postseason was of Manuel’s undisclosed injury. Despite battling injury for most of the season, however, Manuel’s performances at the Pac-12 Championships didn’t seem to be impacted at all. She put up a blistering 21.20 in this event at conference, missing her best time by just .03. With that, Manuel appears to be the favorite, but Weitzeil still has that American Record swim under her belt. She became the fastest swimmer ever in the event with a 21.12 in 2016, and has been looking good in-season.

While those two would be tough to beat at their bests, there are a couple of swimmers who could surprise for the title. Ohio State’s Liz Li joins Manuel in the 21.2-range this season after putting up a lifetime best and conference record at Big Tens. Li placed 3rd in this race last season and comes into the meet seeded 2nd to Manuel. Tennessee’s Erika Brown is also in the 21-low range after having a huge breakout season thus far. Before this season, Brown had never broken 22 seconds. She’s now an SEC Champion with a best of 21.39.

Outside of Weitzeil, Manuel, and Li, the returning finalists this season are Cal’s Maddie Murphy and UNC’s Caroline Baldwin. As a freshman, Murphy placed 6th with a lifetime best 21.76. This season, she’s exactly where she was last year in terms of seed time for the meet. She was able to shave a couple of tenths from Pac-12s to NCAAs last time around, so she’s in a good position to earn All-American status again. Baldwin had a great summer and has done a good job of translating that success into the yards pool. She knocked 3 tenths off her best for a 21.48 at midseason, and though she wasn’t as fast at ACCs, there’s a good chance she’s got a lot left in the tank for NCAAs.

There are several other women who could potentially make this final. Virginia’s Caitlin Cooper comes to mind after her speedy 21.54 to win ACCs. Then there’s Cal’s Amy Bilquist, who’s been on top of her sprint game with a lifetime best 21.74 at Pac-12s. Though she missed the SEC Championships for undisclosed health reasons, Texas A&M’s Béryl Gastaldello has had a breakthrough this season. Her 21.69 from the 2017 Art Adamson Invite was her first best time in this race since 2015. She’s already gotten back into the swing of things, competing at sectionals to prepare for NCAAs. Auburn’s Aly Tetzloff (21.83), Texas’ Rebecca Millard (21.91), and Alabama’s Bailey Scott (21.96) have all been sub-22 and should be fighting for a finals spot as well.

Though under normal circumstances NC State’s Ky-Lee Perry would definitely be considered a top 8 threat, we have to consider her a bit of a darkhorse here. Perry has a season best of 22.01 and a lifetime best of 21.80. Perry, the 2017 ACC Champion in this race, was out 4-6 weeks after dislocating her elbow. Another darkhorse to look out for is Arizona’s Katrina Konopka. She enters as the 27th seed in 22.17, but has a lifetime best of 21.71 from 2017 Pac-12s. Konopka was a member of Team USA’s 200 medley relay that set a World Record at the 2017 Short Course World Championships.

Erika Brown is the one to keep on eye on here ,….i just feel she might spoil the party and pull of something special

I know Liz Li is a controversial figure in the swim swam world, but I feel as if she’s a better pick for 3rd than Brown. Brown has one huge meet in her career (SECs) and it’ll be interesting how she performs at the big show. Li has been here before and done well.

It’s different being seeded highly, but Erika Brown swam better at NCAAs than SECs last year plus with her swims at mid-season there’d be no reason so fully rest her for conference so I think it’s safe to say she has more room to drop and improve.

I heard Li is back on the juice as retaliation to the recent tariffs on steel, so I think she will go 19.99.

Liz Li at home for the upset.

In LCM Simone is miles ahead but in yards it will be very close. Abbey seems to come back at her best while Simone has had an injury. But Simone has shown at Pac-12 championships that she was on the right track and we know she’s a huge racer and she’s always present when it counts the most. Great race in perspective. I don’t see Erika Brown go much faster than at her conference championships. But you never know with a girl who has dropped so much time in one year. Caroline Baldwin is an interesting outsider.

The injury won’t be an affect at all, as she was still pullin in practices and when she was cleared she went right back into hard training. And in Erika Brown’s case, since she has been on fire this year I can honestly see her dropping 3 more tenths to win this or be a close second.

The spring is coming and everything is awakening from the hibernated state. So is Boboli Gigi. Your last name sounds like a song of a small bird behind my window that just returned back after long winter: “gi-gi, gigigi”. Nice to have you back.
There is one suggestion only. Whenever you don’t know and it happened pretty frequently don’t be shy and say it straight. Instead of insulting someone else’s intelligence saying “But you never know with a girl who …..” simply say: “But I never know …..” 😀

You are definitely the favorite of Autocorrect. Look how much it likes you changing the ordinarily sounded “Bobo” to the gentle and lovely “Boboli” 😀