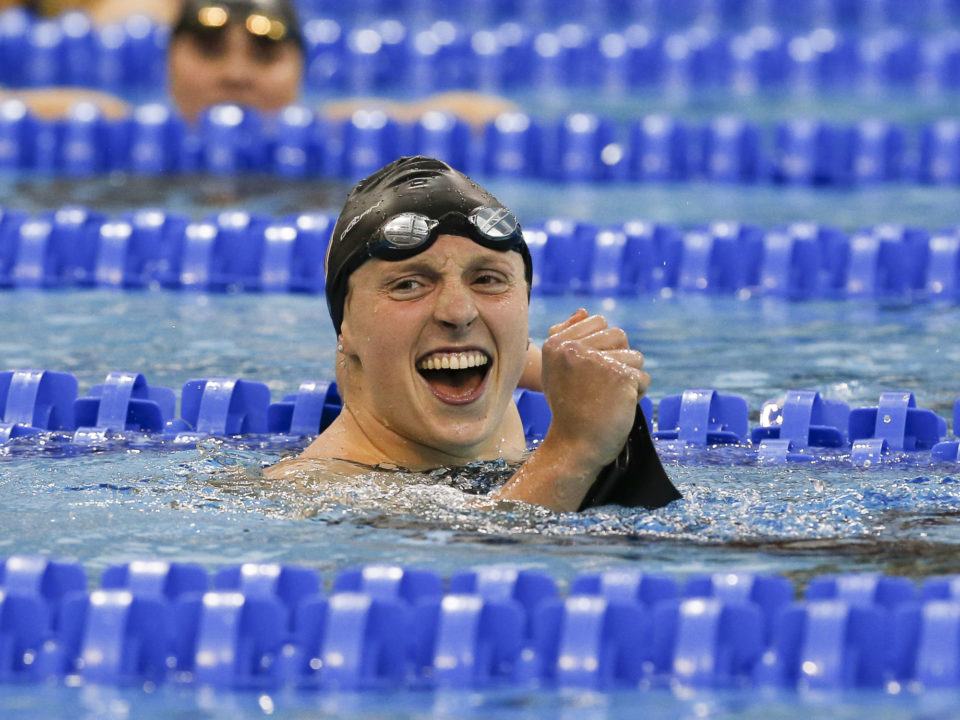 Guess who's back? Katie Ledecky makes her 2018 Pro Swim Series debut in Indy, and could shake up the SwimSquad battles team point tallies. Archive photo via Tim Binning/TheSwimPictures.com

Ledecky to Sponsors: Pay Up

In many pro sports the ‘contract year’ is a well known phenomenon. Athletes in the last year of their current deal have extra motivation to perform so that their next contract will be a big one.

Lenny Krayzelburg continues to run away with the inaugural SwimSquad points lead, winning Indy by 5 points to go up by 30 for the tour. Natalie Coughlin was close behind, sitting second. Jason Lezak and Kaitlin Sandeno continued a spirited battle for third, scoring identical totals in Indy.

Katie Drabot had a sensational meet in Indy, droping numerous personal bests, including a 4:08 400 free and 2:08 200 fly

With college season now fully wrapped up, we’re seeing a lot of new faces making their PSS debuts for the season after a short course yards focus during the school year. On the other hand, the competing meet in Atlanta has pulled a lot of the top names, making for a pretty unique mix of athletes in Indy.

This month is the biggest disparity in active roster sizes so far. Team Lezak, currently sitting fourth, will have plenty of lineup options to try to run down the field. His team leads with 17 active swimmers, compared to 14 for Coughlin, 12 for Krayzelburg and 10 for Sandeno. Lezak has spent most of this year in desperate need of a backstroker, but he’ll have a couple of good options there in Indy.

Sandeno is the one in trouble, with three of her top five picks out and no great butterflyer left on the roster. (All three of those absent high-round picks regularly compete in butterfly). Krayzelburg has a relatively small active roster, but plenty of top-tier options to fill all six starting slots. Coughlin may have to get creative to fill her fly and back slots, but is loaded elsewhere.

In terms of specific events, moving the 1500 free to a separate day of competition leaves some concern that top names will not contest the event. With the meet order changing and the 1500 day moving from Sunday morning to Wednesday night, it’s also possible some athletes had travel plans already in motion. With that in mind, we’re steering away from starting milers and instead using the 400 and 800 for most distance types in starting lineups.

Krayzelburg once again returns top series scorer Chase Kalisz to lock down his IM spot, and the rich get richer as the series points leader gets Katie Ledecky on his active roster for the first time this series. Kelsi Dahlia is the top-scoring flyer on the tour this year, and Oliva Smoliga the second-scoring backstroker behind only Ryan Murphy.

Nic Fink is the obvious breaststroke choice. The flex play has some intrigue, though. Ryan Held scored 15 points in Austin, but hasn’t attended the last two stops. Matt Grevers scored 20 in Austin and 18 in Mesa, but both of those were aided by the 50 back, which isn’t in the Indy schedule. Another good option could be Amanda Kendall.

Coughlin’s team has been marked by versatility, and we went a bit creative with our projections here. There are a couple of locks. Simone Manuel will make her PSS debut and has to crack the starting lineup as a freestyler. Same goes for Lilly King in the breaststrokes. Then Coughlin has a handful of versatile women – Melanie Margalis, Bethany Galat, Hali Flickinger – who are big point scorers with some options as to where they start.

Coughlin’s problem spot is backstroke, where first-round pick Ryan Murphy is not competing. Her best options are Bridgette Alexander (seeded 5th in the 100 and 6th in the 200) and Ali Deloof (seeded 3rd in the 100 but not swimming the 200). We’re taking Deloof, the 100 back runner-up in Mesa, hoping that 8 points in the 100 will outdo what Alexander could do with low A final finishes in both (she’s currently seeded to score 7).

After that, it’s about working in the three all-arounders. Margalis is a huge play in the IMs, especially with Madisyn Cox not competing. That allows Coughlin to add Galat as a flex play in the breaststrokes, essentially starting the top two women’s breaststrokers for potentially 36 points between the two of them. Starting Flickinger over Tom Shields in the fly spot is similar to the Alexander-Deloof dilemma. Flickinger isn’t too likely to score in the 100, but could theoretically win the 200. Shields had two low A final finishes in Atlanta, but probably doesn’t have the ceiling to outscore Flickinger against some pretty tough fly fields.

This month, it’s Sandeno struggling to fill out her lineup. She’s got three elite freestylers competing, but is stuck with only two slots to start them. It’s almost impossible not to start Leah Smith and Zane Grothe at this point, so Blake Pieroni may end up riding the bench.

Jacob Pebley is the natural starter in the backstroke slot, and with training partner Murphy not competing, things are opening up for Pebley to score big. Sandeno has two great Stanford IMers in Ella Eastin and Brooke Forde. It’d be more ideal to start Eastin in the IM slot, but Sandeno has a shortage of flyers with Caeleb Dressel, Michael Andrew and Jack Conger all inactive. Eastin is the only two-event flyer on the roster, and the only other fly entries come from Smith and Grothe (200 flys) and Escobedo (100 fly).

Eastin is a very good 200 flyer, so we’ll start her there hoping for 5-10 points, with Forde then holding down the IM slot. Escobedo is easily the best breaststroker on the active roster, so she starts there.

Lezak is also deep in freestyle, and it probably makes sense to start the ever-reliable Nathan Adrian at freestyle and Mallory Comerford in the flex role, or vice versa. Comerford won the 50 and 100 frees in Mesa, though she now has to contend with Manuel in both.

Lezak again has a tough breaststroke choice between Kevin Cordes and Cody Miller. Cordes has outperformed Miller so far this tour, but the margins have been thin and the sample size small. Flip a coin for that spot.

After months of pining for a starting backstroker, Lezak finally has options. Lisa Bratton is a two-event backstroker but racing a crowded field, Justin Ress a 100-only backstroker with potential to finish top-3. Bratton finished 6th and 8th in Austin, but her times would have placed significantly higher in Atlanta and Mesa. She does have to contend with Canadian Taylor Ruck and a red-hot Olivia Smoliga in both. Ress focused more on freestyle in NCAA season, but doesn’t have to battle the absent Ryan Murphy. We’ll take Bratton, if only because Lezak is far enough behind to need some home runs to catch up, and Bratton’s potential 20 points are a bigger swing than Ress’s 10.

The fly spot comes down to Pace Clark (who’s been very productive so far, scoring third-most among flyers), Cassidy Bayer, Zach Harting and Gunnar Bentz. Clark has been the best option so far, so it just depends on whether Lezak goes into Hail Mary mode, throwing lots of major changes at the wall and hoping to catch a big break. Bentz is also in the mix for the IM spot with teammate Jay Litherland. Neither has swum long course yet this season and both were off their short course bests at NCAAs. We’ll take Litherland, who is seeded 2nd in the 400 IM and 3rd in the 200, but it’d be easy to pick Bentz, seeded 3rd in the 400 IM and 2nd in the 200.