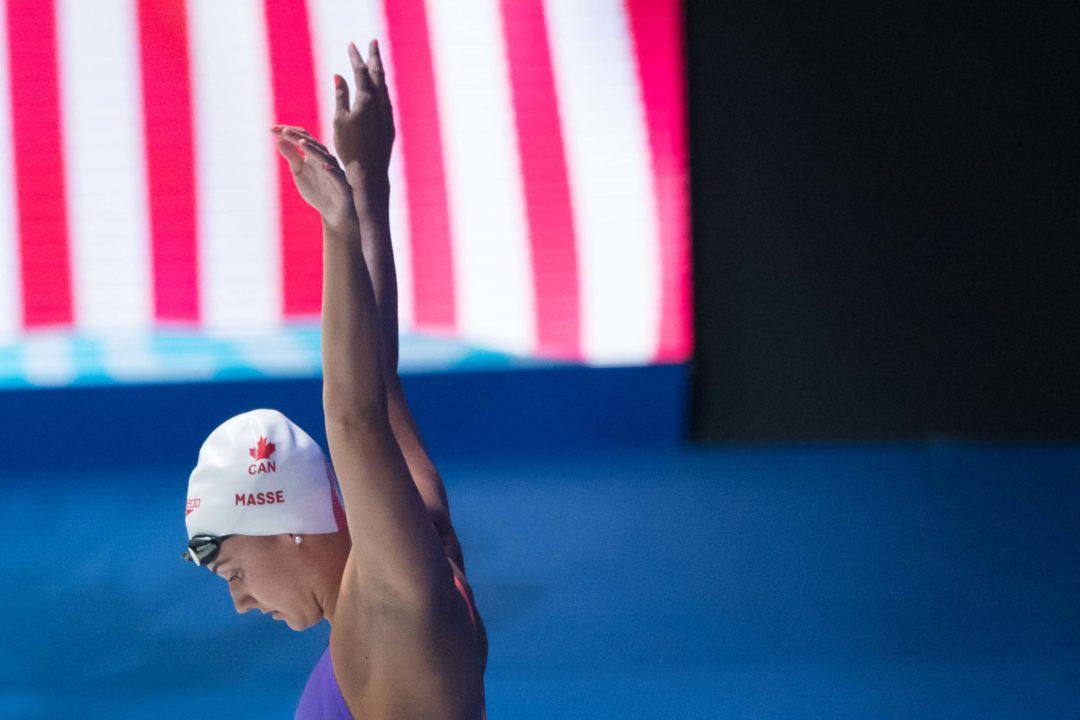 Kylie Masse will swim the 200 back on day 4 of Canadian Pan Pac Trials. Archive photo via Mike Lewis/Ola Vista Photography

The fourth day of finals from the 2018 Canadian Pan Pac Trials will feature just the 200 back, 50 free, and women’s 1500, with all five of the top seeds already qualified for the Pan Pac roster.

Among those in the running to add their name to the team tonight include Kennedy Goss, who was over two seconds under the FINA ‘A’ cut last year in the 200 back, Alex Loginov, who was 22.24 last year in the 50 free (‘A’ standard is 22.47), and a number of girls in the women’s 50 free. Kyla Leibel, the top seed, has already made the team, but Sarah Fournier, Sarah Watson, Sadie Fazekas and Charis Huddle are all in the mix to win.

Kennedy Goss of the Granite Gators (currently training in Indiana) actually out-split Masse over the final 150 metres, touching in a new season-best of 2:10.14 to get well under the FINA ‘A’ cut of 2:11.53. That will nominate her for the Pan Pac team.

UBC’s Markus Thormeyer won his third event of the meet tonight in the 200 back, really taking it out aggressively with a first 100 split of 57.48, putting him under Canadian Record pace. He stayed under his own PB pace through the 150, but faded a bit coming home to finish in 1:59.13. The 20-year-old did say in his post-race interview that his plan was to “send it” the first 100, and has his eyes on the Canadian Record from 2009 of 1:57.34 for Pan Pacs. At the Commonwealth Games, he established his current best time of 1:57.82.

CAMO’s Ariane Mainville dropped nearly half a second from prelims to get herself into contention, but ends up just missing a spot on the team by seven one-hundredths. Kyla Leibel, who made the team in the 100, took 3rd in 25.91.

After hitting a 22.10 this morning, Yuri Kisil dropped a few more one-hundredths in the men’s 50 free down to 22.06, missing his personal best time from the Commonwealth Games by just .03. He looks like a good bet to crack the 22-second barrier at the Pan Pacific Championships.

Mackenzie Padington and Kate Sanderson broke free from Emma O’Croinin and Olivia Anderson around halfway through the women’s 1500 final, and went stroke-for-stroke until the 1400 wall. After that, Padington took off, splitting 59.81 over the final 100 metres to win in a new best time of 16:25.38. That’s her third win of the competition, also coming out on top in the 400 and 800. She’s now the 4th fastest Canadian in history.

Sanderson, who trains in Colorado, didn’t have the speed to match Padington at the end, but did still record a new personal best in 16:30.83, getting her under the FINA ‘A’ standard. That will potentially get her a spot on the Pan Pac team.

Ruck, Smith, and Sanchez only swam the 200 free, all qualified for the team, scratched everything else

This format for Canadian trials has been pretty underwhelming overall. Having swimmers scratch out after qualifying for the team… essentially having one event on the last day… seems like fairly crummy planning on the part of Swim Canada, and it has made for a pretty sleepy nationals.

The opposite problem that the states has with selecting for 2018 and 2019 in 1 trials. The commonwealth trial should have just applied to Pan Pacs

Not really. The selection for commonwealth games was last year. If they’d selected off that, there would be no chance for young swimmers to come through.

I agree that the selection criteria are odd but are they really different for other countries? If you make one event, can’t you select other events as well? I’m pretty sure that open water swimmers can swim the 1500, without actually swimming that event at their selection meet. I think that’s what the Australians are doing; their first place swimmer in the 1500 did not make their qualification standard but I’d bet the Australians will still field at least 1 swimmer in that event.

I’m glad Canada still have some good sprinters coming through after losing condorelli to Italy .. I hope Kisil makes a mark for himself in sprint swimming along with Thormeyer in backstroke

Thormeyer has really stepped his game up this year.

Yeah and he could do well in 200m free as well.. not sure he can medal in backstroke at pan pacs but definitely top 5 contender if he makes another drop in times ..

What happened to Javier in 2 back?