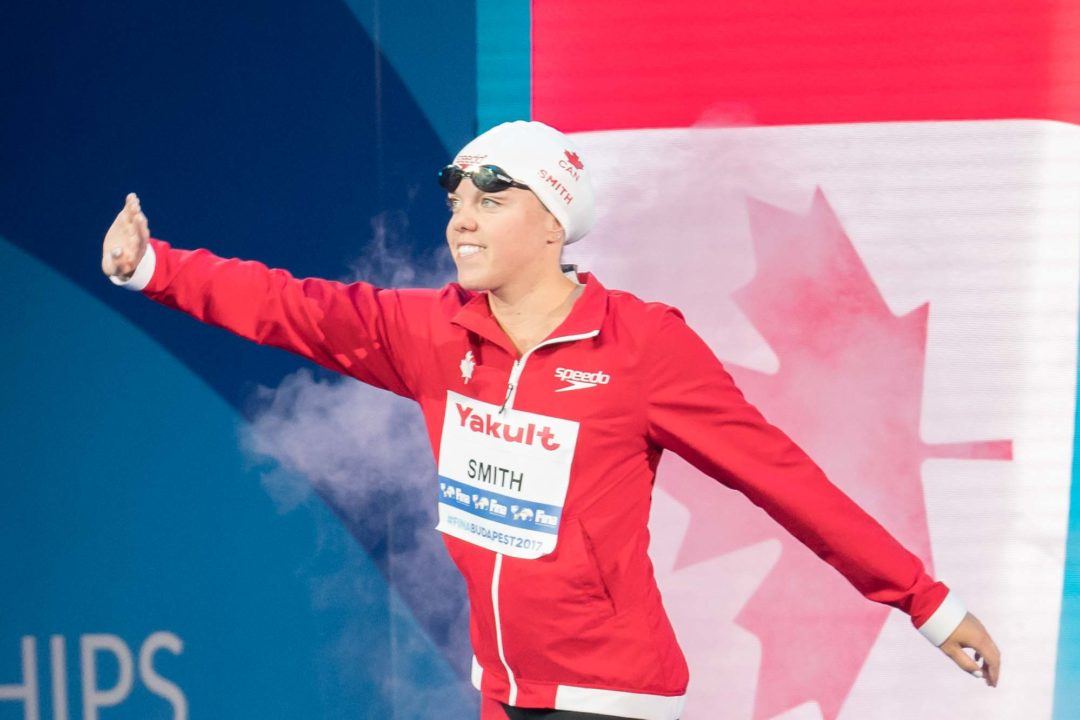 Kierra Smith will look for the breaststroke sweep on the final night of Canadian Trials in the 200. Archive photo via Mike Lewis/Ola Vista Photography

The fifth and final day of the 2018 Canadian Pan Pac Trials in Edmonton features just the women’s and men’s 200 breaststroke and the men’s 800 freestyle.

In this morning’s preliminaries, Kelsey Wog from the University of Manitoba posted the top time in the women’s 200 breast in 2:27.93, the only swimmer under 2:30. Her, along with 2nd and 3rd seeds Kierra Smith and Sydney Pickrem have already earned nominations to the Pan Pac team.

The men’s event will see at least one new qualifier, with none of the finalists qualifying in earlier events. The favorite to win will be Eli Wall, who placed 8th at the Commonwealth Games in April.

In the 800 free, top seed Peter Brothers has already qualified as well. After the early heats, 17-year-old Ryley McRae from Kamloops Classic Swimming holds the top time with a 8:17.32.

At the end of the session the Pan Pacific team will be officially announced.

After a big performance in the 200 IM two nights ago, taking a full four seconds off her personal best, 19-year-old Kelsey Wog from the University of Manitoba unloaded another big best to win the women’s 200 breast in a time of 2:23.83. Her previous best was a 2:25.42 from the 2016 Olympic Trials, and now moves into 11th in the world this year.

Kierra Smith, who won the 100 breast early in the meet, couldn’t match Wog’s early speed and ultimately settled for 2nd in 2:24.69, just over a second off her season-best of 2:23.62 from the Commonwealth Games. Both Wog and Smith were well under the FINA ‘A’ standard of 2:25.91.

It was probably a little closer than he would’ve liked, but Eli Wall of the Toronto Swim Club got the job done in winning the men’s 200 breast in a time of 2:14.17. This adds his name to the Pan Pac team after an impressive showing at the Commonwealth Games earlier in the year.

James Guest of Pointe-Claire and Jonathan Naisby of Sherbrooke both pushed Wall the entire race, with Guest posting his 2nd fastest swim ever (fastest since 2015) in 2:14.39 for 2nd, and Naisby posting a personal best in 2:14.91 for 3rd. Naisby made a big push on the last 50 with the top split in the field at 34.44.

19-year-old Jaren LeFranc dropped over a second from his previous best time for 4th in 2:15.85.

1500 winner Peter Brothers couldn’t match Bagshaw on the final 100, but was good enough for 2nd in 8:10.64, a new season-best. 15-year-old Michael McGillivray from the Regina Optimist Dolphins had a spirited effort out of lane 8, leading the field through the 650m mark before falling to 3rd in 8:12.63. He still recorded a big personal best.

She’s got a potentially great future if she can get more consistent.

Totally agree. As good as the women have been, the men are not good!

Some nice women’s 200 breadwinners coming out of Canada .. I wish Australia had that potential ., Taylor McKeown seems to have plateaued a bit