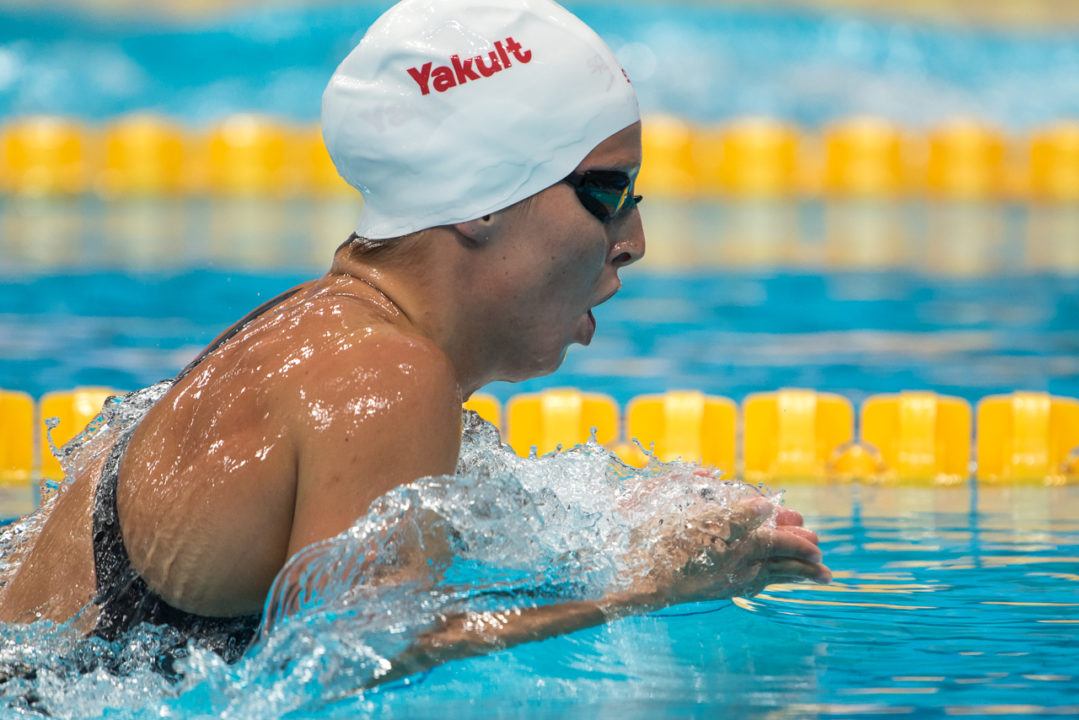 Sydney Pickrem will be looking to add her name to Canada's Pan Pac roster tonight in Edmonton. Archive photo via Peter Sukenik/www.petersukenik.com

Among the names in the running to join the Pan Pac roster tonight are Sydney Pickrem, Sarah Darcel and Erika Seltenreich-Hodgson in the women’s 200 IM, and Josiah Binnema in the men’s 100 fly.

We’ll also see the likes of Penny Oleksiak in the women’s 100 fly, Mackenzie Padington in the women’s 400 free, and Javier Acevedo in the men’s 200 IM.

19-year-old Mackenzie Padington and 21-year-old Kennedy Goss duked it out in the final of the women’s 400 free, with Padington holding the slight advantage early before Goss took over the lead heading into the final 100. Padington pushed back, and sealed the win with a 31.41 last 50 in a time of 4:11.56. This is her second victory of the meet, also winning the 800 free on day 1.

Goss was just over a second back in 4:12.66, and ultimately falls two seconds shy of the FINA ‘A’ standard which would’ve booked her a ticket to the Pan Pacs. She was also three tenths off her season-best from April.

15-year-old Emma O’Croinin of the Edmonton Keyano Swim Club continued her strong showing at the meet with a 3rd place finish in 4:15.31, improving her previous personal best of 4:17.17.

Island Swimming’s Jeremy Bagshaw got out to a big lead early in the men’s 400 free, and managed to hold off the University of Calgary Swim Club’s Peter Brothers down the stretch to win in a time of 3:54.15. Bagshaw has been as fast as 3:49.52 this year, a time he did while placing 5th at the Commonwealth Games in April.

Penny Oleksiak and Maggie MacNeil had a very tight race to the wall in the women’s 100 fly, with MacNeil actually making up some ground on the back half, but it was Oleksiak who got her hand on the wall first in a time of 58.37. MacNeil was 58.44 for 2nd, a new personal best, and both got under the FINA ‘A’ standard (though both already qualified for the Pan Pac team).

After turning 3rd at the 50, UBC’s Josiah Binnema used a big 27.81 back half to win the men’s 100 fly definitively in a new personal best time of 52.56. He lowers his previous mark of 52.90 set at the 2017 World Trials last April. He is the first swimmer to add their name to the Pan Pac roster tonight.

Swimming in her first final of the meet, Sydney Pickrem adds her name to the Pan Pac roster with a win in the women’s 200 IM, clocking in at 2:10.66. She held a slight lead throughout the race after the fly, and had the top freestyle split in the field to solidify the victory. She’s been as fast as 2:09.92 this year, 4th fastest in the world.

Kelsey Wog from the University of Manitoba used a big 37.20 breaststroke split to put herself right in the thick of things with 50 to go, and closed well to annihilate her previous personal best (set in prelims) by over three seconds in 2:11.14. She was well under the FINA ‘A’ standard, as was 3rd place finisher Erika Seltenreich-Hodgson, and thus both will be nominated for the Pan Pac team.

Robert Hill from the University of Calgary Swim Club had the top breast split in the field (35.18), and held off Montana Champagne of the GO Kingfish for 2nd in 2:03.03, with Champagne dropping over two seconds off his best time for 3rd in 2:03.09.

15-year-old Cole Pratt continued his strong showing at the competition, splitting the fastest on freestyle (29.14) to take 4th in a new personal best of 2:04.03.

I thought this meet would be faster

Montana Champagne has to be the best name in swimming right now.

So no livestream tonight?

We’ll have to wait and see if it comes on late. It’s done that a couple times already for prelims.

I see the Canadians are really busting it out in prelims

Caeleb Dressel has been wifeyed up with his high school sweetheart for years now. You can forget that. 😂

I need screenshots or a link!

I got you covered: http://imgur.com/gallery/R4yoIxk

Is the livestream not working for anyone else?

Mine says its about to start!! Its 15 minutes later than it says!!

Yeah, not working for me