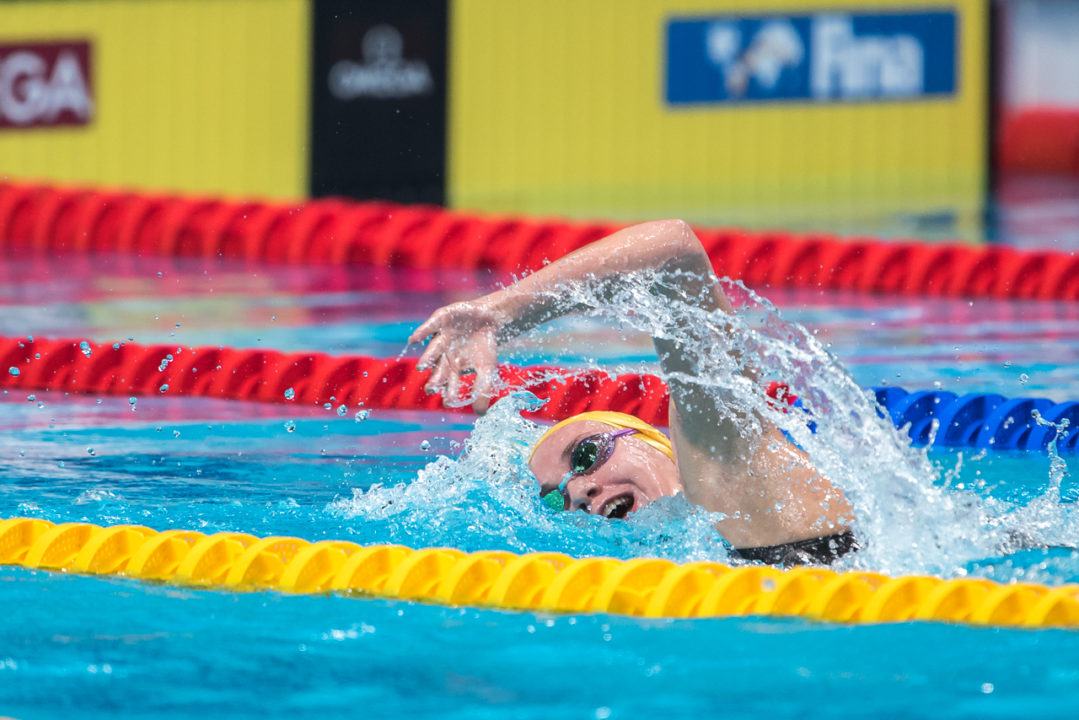 Major talent will be showing up for the 2018 Aussie Age Championships, which kick-off on Saturday with Ariarne Titmus in the water. Archive photo via Peter Sukenik/www.petersukenik.com

Right on the heels of the 2018 Commonwealth Games are the Australian Age Swimming Championships, an 8-day affair filled with budding talent from across Australia. Swimmers are broken into age groups of 13, 14, 15, 16 and 17/18 (as of April 21, 2018), all vying for spots on their nation’s Junior Pan Pacific Championships and Oceana Championships rosters. Although it’s an age group meet, key players from the ‘senior’ circuit will be making appearances, including Commonwealth Games medalists Ariarne Titmus, Elijah Winnington and Laura Taylor.

At the Sydney Olympic Park & Aquatic Centre, Titmus will be contesting the 100m, free, 200m free, 400m free and 800m free as a 17-year-old, although the pressure of making the senior Pan Pacific Championships squad in her pet events is off her shoulders.

Taylor surprised the Gold Coast with a silver medal outcome in the women’s 200m fly behind Wales’ Alys Thomas at the Commonwealth Games this year. Making a name for herself at this year’s Australian National Championships with a monster personal best of 2:06.80 to take the 200m fly title, Taylor raced to 2nd place on the Gold Coast, beating out Olympian Emma McKeon in the process.

For the men, Winnington is ready to replicate his incredible 8 gold medal haul from these Age Championships last year as a 16-year-old. The Bond University athlete, who trains alongside Olympic medalist Cameron McEvoy, busted out wins in the 50m, free, 100m free, 200m free, 400m free, 100m fly, 200m fly, 200m IM and 400m IM, proving he is a versatile asset for the green and gold. And, Winnington recently delivered on his potential, becoming an important member of the men’s 4x200m freestyle gold medal-winning relay on the Gold Coast.

In Sydney this weekend, competing in the 17/18 age group, Winnington will try to lay claim to titles across the same event line-up as last year, save the 400m IM.

Another promising young talent is emerging from All Saints in the form of Tom Hauck. Nicknamed ‘Tomahawk’, the now-15-year-old proved dangerous at this meet last year, taking 7 golds and 2 silvers across freestyle, backstroke, fly and IM events. The teen weapon is ready to rumble across the same 9 events this time around to further solidify his status as an emerging player waiting to make an elite international roster for the Australians.

I’m really interested to see how Titmus’ 100 free looks like. Her one year old personal best of 56.35 is definitely outdated since she splitted recently in 200 race 56-58. it would be right to see it at least 54 low. And under 54 won’t be a surprise neither.

Pretty sure Titmus has decided to give this meet a miss. No swim in the 400m today, and QLD schools are back and she headed back to school last week.