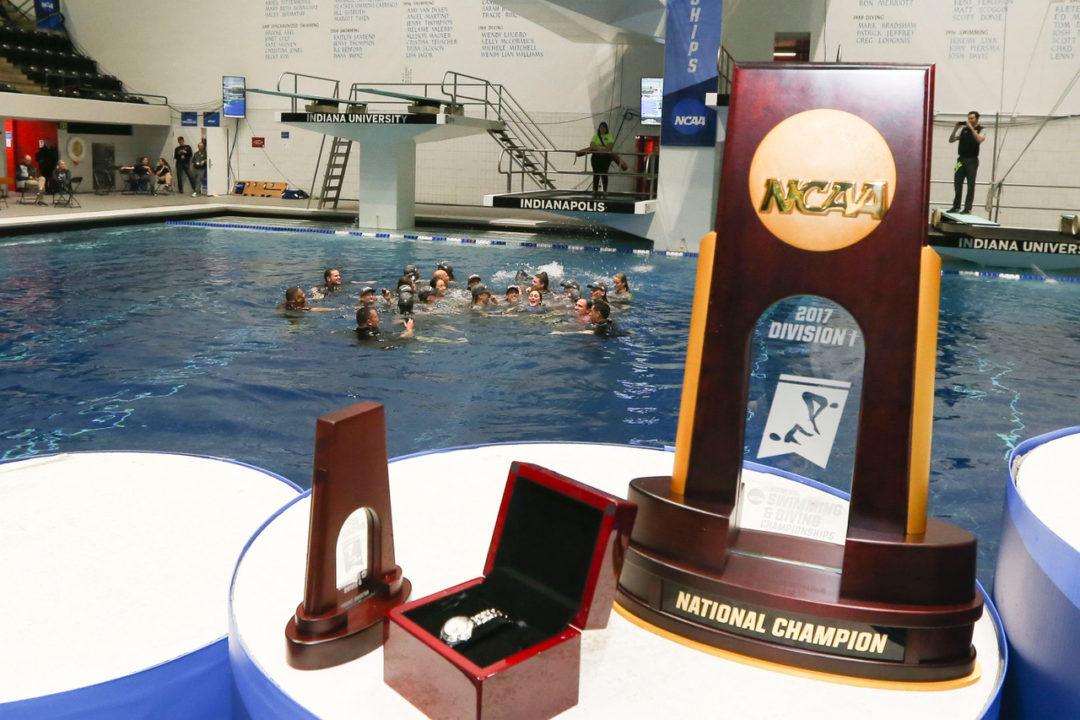 Stanford is projected to return nearly 200 points more than any other team due to their strong depth heading into next year as they look to defend their 2017 NCAA title. Current photo via Tim Binning/TheSwimPictures.com

Although an exciting women’s NCAA championship just wrapped up a few weeks ago, it’s never too early to start looking at next year and how the teams will stack up against each other. It’s no surprise that every year teams have to say goodbye to their seniors, but the real question is how will losing these experienced swimmers effect next year?

For teams like Michigan and Southern California, it only means they’ll come back with an older, more experienced team since the Wolverines did not have any senior swimmers compete at NCAA’s and USC will only lose 6 points scored by Anika Apostalon.

Minnesota will take the biggest hit as they lose 87 points from their seniors, but the majority of those points came from their two senior divers. Zhou Yu and Lexi Tenenbaum contributed 65 points across the 1-meter, 3-meter, and platform. Looking at the swimmers alone, Georgia and Virginia will take a hit as they both lose 83 points. Georgia’s seniors Olivia Smoliga, Chantal Van Landeghem, Emily Cameron, and Rachel Zilinskas made strong impacts across the board in the 200 and 400 IM, 200 butterfly, 100 backstroke, and 50, 100, and 1650 freestyle events where they scored a combined 83.50 points. The sprint program for the Bulldogs will have to find more depth as they lose two top 8 50 freestylers with Smoliga (who finished second) and Van Landeghem (who finished eighth). Georgia will still return 169 points with strong sophomore and junior classes.

Virginia takes an even bigger hit as they are only returning 66 points of their 149 total points. Kaitlyn Jones, Laura Simon, Leah Smith, Ellen Thomas, and Shannon Rauth all wrapped up their collegiate careers leaving big gaps that the Cavaliers will have to find a way to fill, especially in the distance events. Smith finished second in the 500 and 1650 right behind Katie Ledecky and fifth in the 200 freestyle. Even more important than the distance events will be filling out the relays for Virginia. They had 13 senior swims on the relay, including four seniors swimming on the 400 freestyle relay and three seniors swimming on the 200 and 400 Medley Relay. These relays will be critical to fill out for the team score race.

As for the defending champions – there’s something to be said for the depth that head coach Greg Meehan has built for Stanford. While it will be hard to lose Lia Neal as someone that the team could consistently rely on, Stanford will still return nearly 200 points more than any other school. They put on a dominant performance finishing the meet with 526.50 points and will be returning 494.50 of those points. Seniors Neal and Nicole Stafford contributed heavily in the freestyle events with Neal scoring a combined 31 points in the 50, 100, and 200 freestyle. She also played a big role on four out of the five relays which gave Stanford 186 relay points. The Cardinal will return 308.5 individual points next season.  That’s almost twice as many returning points as anybody else in the country will get back. It’s also 100 points more than any team scored individually, including seniors, at NCAAs last season.

California looks to come back with yet another strong showing returning 310 points and losing 56 senior points between Farida Osman (who won the 100 butterfly), Marina Garcia Urzainqui and Kristen Vredeveld. Texas A&M still holds onto the third spot based on returning points followed by Texas.

Here’s a more in-depth look at the top 12 teams from the 2017 NCAA Championships broken down team-by-team:

Are Senior diving points subtracted (if there are any from these teams)?

wow, uva has a lot of work to do next year.

Feel good time is over for Busch at UVA. He inherited a loaded women’s team. To his credit, some athletes responded & developed well under his coaching — Smith, Bartholomew, Simon & others. But all were Bernardino era recruits. They likely won’t be in the top 15-18 next year or in the top 3 of the ACC. He’s got some real challenges to get men’s or women’s into a position to win ACCs in the next 1-3 years.

Are the incoming recruiting class rankings going to be posted soon?