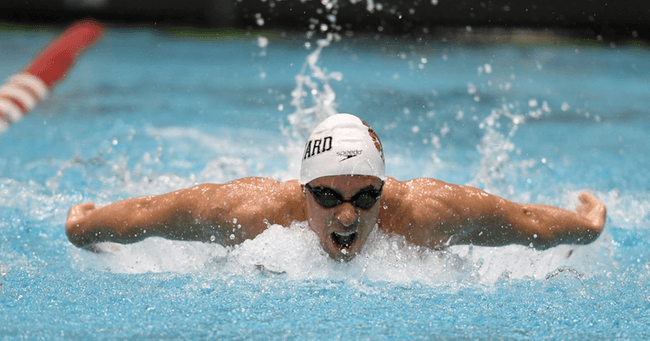 With the absence of longtime foe Princeton at the 2017 Ivy League Men’s Championships, Harvard is cruising toward a conference title with nary a challenger in sight. Stock photo via Harvard Athletics

With the absence of longtime foe Princeton at the 2017 Ivy League Men’s Championships, Harvard is cruising toward a conference title with nary a challenger in sight. The Crimson loaded up the three swimming and one diving event with a total of 17 finalists; 11 in A finals and 6 in B finals. The Crimson started the morning session placing four swimmers in the top 8 of the 500 free, including the three fastest qualifiers: sophomores Brennan Novak (4:18.72) and Logan Houck (4:20.06), and freshman Zach Snyder (4:20.83). Columbia followed with a pair of their own: Michal Zyla (4:21.24) and Nikita Bondarenko (4:22.59).

Penn had a big showing in the 200 IM, earning four of the top 8 spots with seniors Michael Wen (1:45.95) and Grant Proctor (1:46.97) and sophomores Mark Andrew and Thomas Dillinger. Harvard senior Jack Manchester (1:45.71) turned out the top time of the morning.

Yale junior Aaron Greenberg, back from a year off training in Israel, was the quickest out of prelims in the 50 free, qualifying with 19.47. Harvard’s Steven Tan (19.75) and Brown’s Daniel Klotz (19.92) were the only other sub-20s out of the morning heats. Cornell had a particularly impressive run, placing two in the A final (freshman Jack Mahoney and sophomore Trevor Lake) and two in the B final (Luke Reisch and Jack Brenneman).

Columbia junior Jayden Pantel was the top diver of the morning with 336.25 points on the one-meter board. Pantel swept both diving titles last year, earning the High Point Diver of the Meet award. All three of Harvard’s divers made the top-8, including the #2 and #3 qualifiers, juniors Bobby Ross (310.00 points) and David Pfeifer (295.95).

Based on point projections for the four-day meet, here is how Thursday’s morning session played out:

Looks like Harvard would have run away with it even with Princeton in the mix. I bet Penn would have given Princeton a run too with they way they are swimming.

So Harvard’s Dean Farris did not swim an individual event this morning (unless I missed it). Which means unless he’s planning a wicked double (200 Free / 100 Back or 200 Back /100 Free) on one of the last two days, he should be swimming on all of Harvard’s relays. Pretty safe guess he leads off the 200 Free relay tonight to get a time in the 50.

I believe the plan is a wicked double. 100 back and 200 free. But then again I’m just guessing.

2free and 1 Back double tomorrow. Then depending on how the backstroke looks he may opt to do the 200 back which he was a 1:42.9 out of high school. If that’s the case I’m sure he’ll just lead off the 4free relay for a time