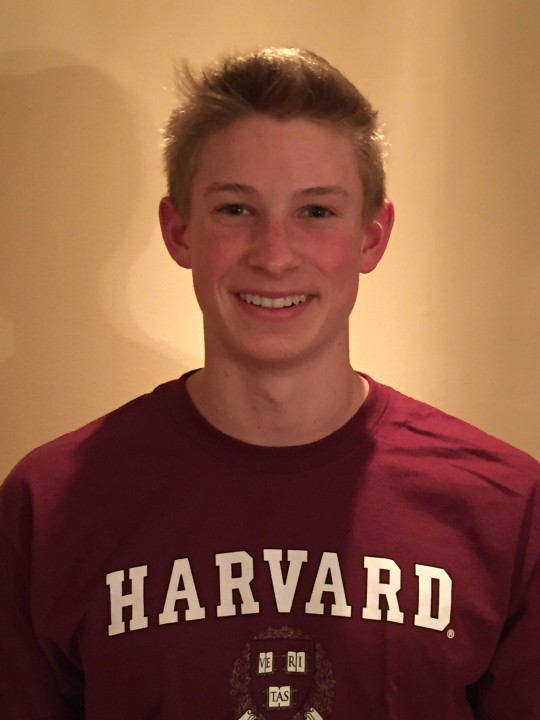 Harvard freshman Dean Farris is having an Ivy League Men's Championships for the record books. Archive photo via Dean Farris

The Ivy League changed its Swimming and Diving championships this year, adding a half-day at on Wednesday to accommodate the 200 medley relay and the 800 free relay. The new format has given Harvard freshman Dean Farris a chance to shine, and he’s been tearing it up from the outset.

After a busy Wednesday night in which he anchored Harvard’s winning 200 medley and 800 free relays in 18.89 and 1:31.29, respectively, Farris took Thursday off. He wasn’t even on the Harvard 200 free relay (although they won by nearly 7/10 without him).

That break from racing seemed to work wonders for Farris; on Friday he unleashed a pair of prelims swims for the record books. First, in the 200 free, Farris ripped a 1:32.71 to erase a 37-year-old Blodgett Pool record set by Auburn’s Rowdy Gaines (1:34.57). At the same time he took 8/10 off the championship record (1:33.50), which Kenyon assistant coach Doug Lennox set while swimming for Princeton at the 2009 Ivy Championships. Two events later, Farris came back and wiped out another pair of records with a 45.74 in the 100 back. He was 1.1 under the pool mark set by Princeton’s Michael Strand in 2014, and 2/10 faster than the Championship Record set by Columbia’s David Jakl’s in 2014. Farris earned a NCAA “A” cut in the 200 free, and was .37 away from another one in the backstroke.

Assuming Farris swims the 200 back on Saturday, we’ve added his splits to the above table for future comparison’s sake.

I like his race style, fly and die, but not die too bad. Odd 3rd 50 split in that 200 this morning. We’ll see if he has something left in it tonight. Also, second 50 of his 100 back is almost as fast as the first 50 he had on that previous time in the table. Quite impressive for a bit over a years worth of improvement.

Dang this guy is CUTE.