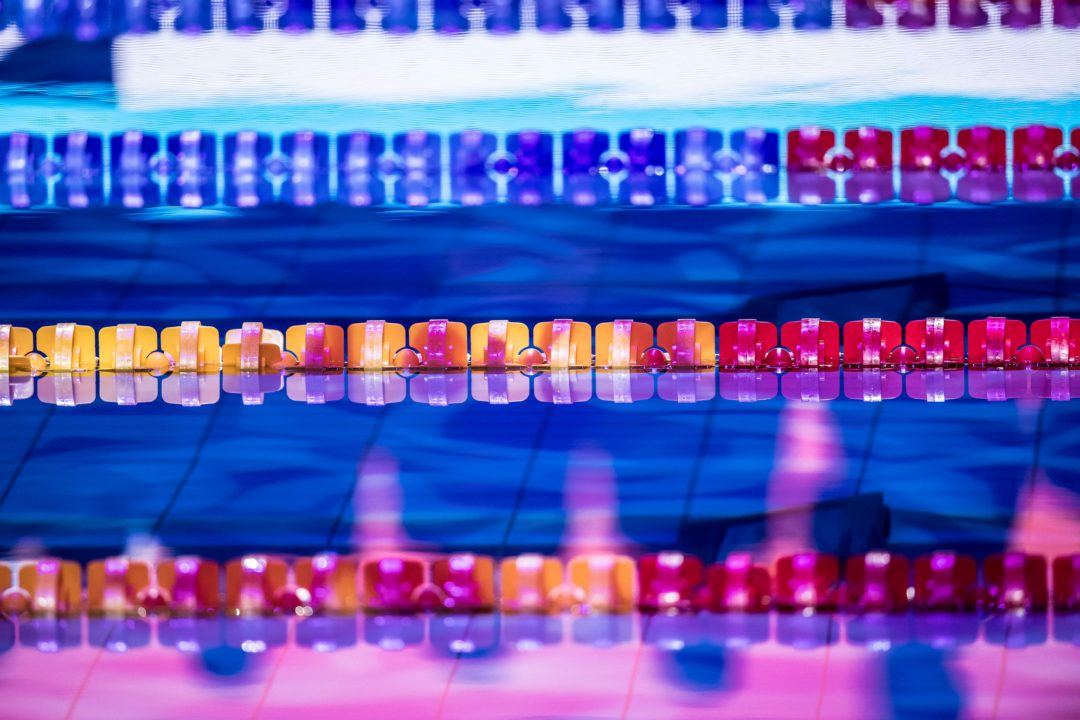 In the 200 IM at the district 3 meet, Bartram Trail's Summer Stanfield knocked a full second off her best time to win in 2:01.74. That's almost 3 seconds faster than she went to take 2nd in the event last season and meets the Automatic All-American (AA-A) standard. Stock photo via Mike Lewis/Ola Vista Photography

The Florida High School Athletic Association’s 2017 state meet series is in full swing, with the Class 3A district meets now complete. The top 24 swimmers from the combined districts in each region will move on to their respective Class 3A Regional Championships.

Bartram Trail’s Summer Stanfield is one to watch at the upcoming region 1 meet. Stanfield, a 2-time medalist at the 2016 state meet, won both of her individual races in district 3 for top seed in both. In the 200 IM, she knocked a full second off her best time to win in 2:01.74. That’s almost 3 seconds faster than she went to take 2nd in the event last season and meets the Automatic All-American (AA-A) standard. She was also faster than her 2016 state time in the 100 back, where she posted a 56.80 to come within a half second of her lifetime best.

There were 2 swimmers to take top seed in both of their individual events for region 2, both from Sebastian River. On the girls’ side, freshman Mia Martinelli put together a sprint sweep. She went up against Harmony’s Savannah Steele for the region 5 title, getting to the wall first in 25.43 to Steele’s 25.87. They went head-to-head again in the 100 free, with Steele taking the early lead in 26.56 at the halfway mark. Martinelli outpaced her 28.30 to 29.72 on the back half, and came up with another win in 55.18 to Steele’s 56.28.

Ethan McCloud came up with a pair of wins for the Sebastian River boys. He blew away the field in the 200 IM, finishing over 10 seconds ahead of anyone else in 1:58.46. He was similarly dominant in the 100 back, touching in 53.34 to finish over 7 seconds ahead of the field. In terms of the whole region, he’s currently the leader by 5 seconds in both of his events.

Fort Myers freshman Olivia McMurray demolished the 200 IM Pool Record set by last season’s state champ Alina Faunce. She was a second shy of her lifetime best, shattering the Pool Record mark by 3 seconds and finishing over 10 seconds ahead of the field in 2:04.82. McMurray went on to win the 500 free by 20 seconds, touching in an AA-C time of 4:56.12.

Osceola senior Ricardo Martinez helped his team to victory in district 8 with a pair of individual wins, making him the top seed in both for region 3. Martinez will once again vie for the 200 IM state title after coming up 2nd by just 3 tenths last season. In district 8, he kicked off the postseason with a 1:56.28 victory, finishing 5 seconds ahead of anyone else. He was also the 100 back winner, posting a 52.06 for the fastest time of anyone in the region 3 cluster.