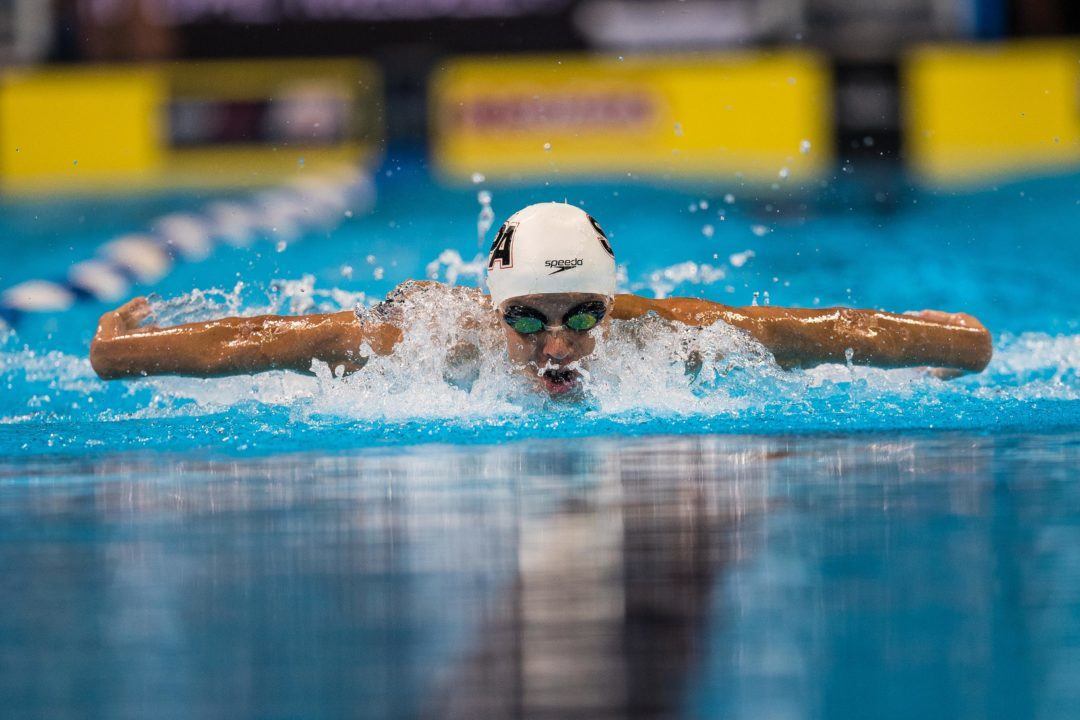 We've put together all the information you need to follow the series, along with the defending champions of each district. Archive photo via Mike Lewis/Ola Vista Photography

The 2017 Florida High School Athletic Association State Series kicks off this week, with the Class 1A and 2A district meets taking place from October 16-21. The top high school swimmers from around the state will compete in timed finals at districts. The top 24 swimmers in each event from the combined districts in each region will move on to their respective regional championships. The 24 fastest swimmers from the finals of all regions combined then advance to the state meet, where they compete for individual and team titles.

The Bolles School Bulldogs seek to extend their winning streaks, but it should be a good battle on the women’s side. The boys currently have 29 straight titles, while the girls have 27. They didn’t win any events on the girls’ side last year, and have only one returning individual champion (Ariel Spektor, 100 fly) on the boys’ side. The Bulldogs may rely on their depth and their relays to get the job done again.

Gulliver Prep’s Miguel Cancel, a Florida commit, returns to defend his titles in both the 200 IM and 500 free. His school is the defending champion on both the boys’ and girls’ sides. Teammate Emily Cordovi will also defend 2 individual titles, as she’s the reigning 100 fly and 100 back champ. There are 2 more women returning to defend multiple titles: Bayshore’s Ryley Ober (200 free, 500 free) and American Heritage’s Catharine Cooper (50 free, 100 free), who claimed every individual free race last season between the two of them.

Belen Jesuit’s Aitor Fungairino will compete in his final state series before heading off to Texas next fall. Fungairino is the defending state champion in both the 200 and 500 freestyles. Louisville commit Alena Kraus, a Gainesville senior, is one of the top returners on the women’s side, having won the 100 and 200 freestyles at the 2016 meet. She’s won 3 straight titles in the 200 free and 2 straight titles in the 100 free.

Kraus will look to lead her school to victory over Bartram Trail after Bartram Trail edged them out by half a point last season. That made them the first northeast Florida public high school to win a girls state title since 1941.

Florida commit and U.S. National Teamer Robert Finke headlines the class 4A action. Finke, a Countryside senior, is the defending state champion in the 200 IM and 500 free. Plant’s Morgan Tankersley, a future member of the Stanford Cardinal, looks to lead her team to victory on the women’s side. She smashed State Record in both the 200 free and 500 free last season, including a 17-year-old record set by Janelle Atkinson in the 500 free.

The Oviedo and Buccholz girls will battle it out again this season after Oviedo beat Buchholz for the region 1 title, but Buchholz turned the tables to win states ahead of Plant (2nd) and video (3rd). The dynamic sprint duo of Kaitlyn Cronin and Talia Bates returns for Buchholz, while Oviedo’s squad is led by returning sophomore Abigail Gibbons, who won regionals and finished 2nd at states in the 100 fly last season. A new addition to Buchholz’s squad, Isabel Ivey, makes them very dangerous this year. Ivey was last year’s 1A champion in the 200 IM and 50 free. She will once again chase the 200 IM State Record set by Olympic champ Melanie Margalis in 2009 (1:57.07). She came within tenths last season with her 1:57.31.

Lauren, you do know Plant HS was runner-up last year?

Yep. This isn’t meant to be a comprehensive review or full preview of the state meets. I will do those individually ahead of each meet. I noted that Buchholz won states last season but lost the regional meet to Oviedo. The state champs are usually the winners of their district and region as well, so some might find that interesting. Plant is very much a title threat and were the runners-up last year. But I will re-word the sentence if it seems confusing to you.

No need to re-word. Not confusing at all. Look forward to preview after Region meets!

Thanks! I changed it anyways so it explicitly says they were 2nd. Just in case.

Any relation to Matt Gribble? One of the all time great flyers for the US!

Plant HS will give Bucholz all it can handle!

Also I believe regionals will be timed finals, they changed it from a prelims-finals system a couple years ago and I don’t think it changed back.

My mistake. I have fixed this also. I swam at these meets back when I was in high school and they were still doing prelims/finals. Felt a little old for a moment there.

lol
Wish they still did that but I think it makes it easier travel-wise for most schools.

Yes that is correct… She will be competing in 4A this year.

Thanks. I’ll add that in.