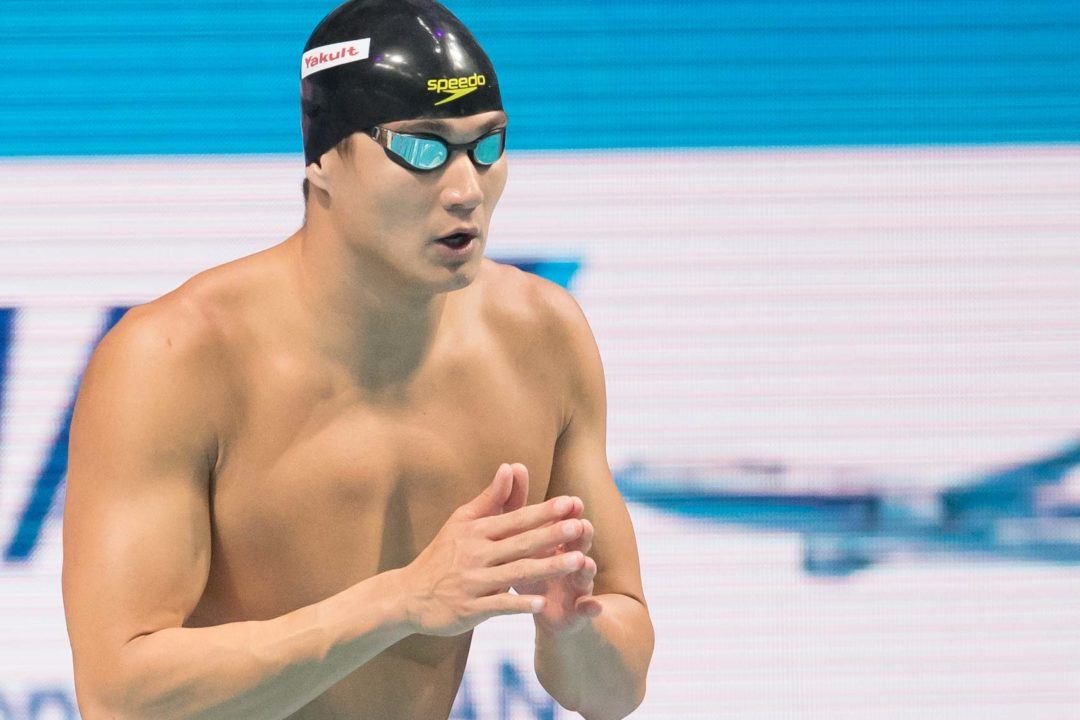 Nathan Adrian will make his individual debut in Budapest at day 4 prelims in the 100 free. Current photo via Mike Lewis/Ola Vista Photography

The fourth preliminary session from Budapest will feature four individual events, along with the first of our mixed relays. The 50 back and 200 fly will be contested for women, the 100 free and 200 IM for men, and the mixed 4×100 medley will wrap things up.

The women’s 50 back will lead us off, with some swimmers coming in with the hot hand after the 100 back, and others looking to rebound after poor performances.

The first name that comes to mind is Canadian Kylie Masse, who broke the eight-year-old 100 back world record on day 3 in 58.10. She holds the Canadian record at 27.67, and will swim in the 7th of 7 heats alongside top seed Fu Yuanhui (CHN), Holly Barratt (AUS) and Georgia Davies (GBR).

Fu is the defending champion, and also won silver in 2013, but is coming off a rough performance in the 100 back where she missed the final after winning Olympic bronze last summer.

Heat 6 will have 100 back silver and bronze medalists Kathleen Baker and Emily Seebohm, along with 2015 silver medalist Etiene Medeiros and 2007 silver medalist Aliaksandra Herasimenia.

The men’s 100 free brings great intrigue after what we saw in the 400 free relay.

The first circle-seeded heat will be centered by Olympic silver medalist Pieter Timmers, along with Mehdy Metella and Luca Dotto. Kristian Gkolomeev of Greece will be out in lane 8, but is potentially dangerous after splitting 47.87 in the 400 free relay. Joseph Schooling will also swim after a solid 5th place finish in the 50 fly.

The 11th of 12 heats will have Americans Nathan Adrian and Caeleb Dressel in the middle of the pool. Dressel is coming off an American record performance of 47.26 leading off the relay, while Adrian also looked good, anchoring the U.S. team to gold in 47.25. Brazil’s Marcelo Chierighini had the fastest split of anyone in the field at 46.85, and Russia’s Vladimir Morozov (47.52) was solid as well. They’ll have lanes 6 and 3.

Not to be forgotten, Hungarian Richard Bohus will be out in lane 9 after splitting 47.21 in the 400 free relay, anchoring the host nation to the bronze medal.

Australian Cameron McEvoy will have lane 4 in the last heat, still looking to find his groove after a so-so performance in the relay. After a solid lead-off of 48.04 in the relay prelims, McEvoy split an identical time with a takeover in the final. He’ll have to be faster if he wants to win a medal, which he did two years ago, taking silver.

Others swimming in the last heat will be Duncan Scott, who became the first British man ever under 48 seconds this year in 47.90, and Gabriel Santos (BRA), Jack Cartwright (AUS), and Dominik Kozma (HUN). All three of them led off their relays teams in 48.30, 48.34 and 48.26 respectively. Another name to keep an eye on is Cuban Hanser Garcia, who has magically reappeared this year after finishing 7th at the Olympics back in 2012.

There will be just 4 heats in the women’s 200 fly, with Olympic champion Mireia Belmonte and home crowd favorite Katinka Hosszu swimming in the last heat. It will be interesting to see if Hosszu sees this event through, as Kazan saw her place 13th in the semis shortly after swimming the 200 free final. She will swim that final once again tomorrow night, so we’ll see what she decides after the heats. 17-year-old American Dakota Luther will make her Worlds debut from lane 1.

The men’s 200 IM is a relatively wide open event with both Michael Phelps and Ryan Lochte not in the lineup. Olympic bronze medalist Wang Shun headlines heat 3, and German Philip Heintz takes heat 4. Heintz exploded this year for a best of 1:55.76, two seconds faster than he’s ever been. He’ll swim alongside American Abrahm DeVine, who was a surprise qualifier at U.S. Trials in 1:56.79.

The last heat is by far the most stacked, with all three of the 400 IM Olympic medalists from last summer: Daiya Seto, Kosuke Hagino and Chase Kalisz. Hagino and Kalisz have yet to swim in Budapest, but Seto has looked very strong thus far through the 200 fly semis.

Lineups for the mixed relays will be announced prior to the session, but it should be a fun event with plenty of entries. China and Japan should make some noise right from the hop in heat 1, and then we’ll see the following contenders in the other heats: U.S., Canada (heat 2), Russia (heat 3), and Great Britain, Hungary, Australia (heat 4).

You can see all the start lists for day 4 prelims here.

The 100 free talent pool is just so much deeper than the 200free talent pool right now. Men’s 100free is always one of the most exciting races at any Worlds/Olympics because so many great swimmers are battling it out for those 8 spots in the final. Adrian/Dressel/McEvoy/Morozov/Fratus/Chierighini/Timmers/Metella/Dotta/Schooling/Bohus, and as a Canadian, have to mention Yuri Kisil who nearly made the Olympic final last summer.

*Forgot Fratus isn’t in it.

It’s a shame the Olympic champion is absent.

Someone give me a chance of Dakota Luther semifinaling in the 2 fly?

Correction: percentage on the chance of her finaling?

The interesting thing to watch this morning with the mixed medley relay may not be the times ….. but which teams decide to “scratch”.

I realise that some amongst us will immediately proclaim “but its now an Olympic event !!”. That it may be but the announcement came AFTER almost all teams had been selected ….. and teams at this Worlds are probably somewhat smaller than they would be at an Olympics/pre-Olympic Worlds. Thus teams are having to juggle what events do we “spend” our top swimmers on (and which not so) …. and some teams may not have a quality back-up on certain strokes which will in itself be an issue in the standard medley relays.

For these reasons,… Read more »

They could go with Maddi Wilson back,
Matthew Wilson breast, Dave Morgan fly and Graham on the free ?

Wilson has been training purely freestyle as she didn’t make the team on back.Both Seebohm and Barrett have 50back heats and semis (both are at least reasonable chances of final). Beaver didnt qualify in 100 (53high man at best) so no real quality fall back option for Larkin

Wilson (male) didnt swim the 100BRS (2nd at Nats didnt make QT) and is yet to break 1min. Like Cave he is currently non competitive over this distance.

Elmslie …. nowhere near her Rio standards. Jack would be a possibility BUT neither of these are currently likely to split sub53. Would be open to… Read more »

I’d be surprised if there were lots of scratches for the prelims. The programme was not a secret. Nobody forced the countries to enter the mixed 4×100 medley relay, so I’m not sure why a team would make the conscious decision to enter the event and then scratch … if the event isn’t a priority for a country, it’s an opportunity for secondary swimmers to get some experience.

The decision to make MMR an Olympic event was made AFTER most teams (exc USA who have the latest possible Trials) had been named and in post Olympic years, you often see reduced teams. In that case they may NOT have a second stringer for swimming relay heats for the standard relays let alone mixed. In fact this is probably the case here with ALL teams bar USA. You will find they have A/B options on some strokes on both male & female sides but not for all strokes.

What happens is that teams have probably put in a nomination for these events before nominations for the championships close BUT when the meet is underway, they reassess as to how… Read more »

Australia has shown no interest in the past, but I would like to see even an experimental young team put together, just for the experience of relay racing at this level.

Women went from full magic body to bodysuit men went to jammer so they were more affected by the suits and lost more after them.

100fly seems to have the best chance of being taken down

Honestly, I think Xu is more likely to take the 50 back record down. He’s got crazy speed and his start was fantastic last night. I’d also say 100 free is more likely to get broken than 100 fly, but I don’t think either will be broken at this meet.

My reasoning is that with three guys having gotten down to the 47 lows (Maggie and McEvoy less than 2 tenths and Dressel just over 3 tenths off the WR) and Schooling being the closest at .57 off shows that the free is in more danger than the fly. As ridiculously suit-aided as Cielo’s 46.9 was, that 49.8 in the fly is even crazier.

Sarah Sjöström is within striking distance of the women’s 50 free.

The women’s 200 fly seems untouchable for the foreseeable future.

One kid here disliked all the comments.

Hoping that Adrian has a great swim tomorrow! Always such a team player and so consistent with relays for years, and such a humble, friendly guy.

Is there a live feed?

Olympic Channel, Comcast, and the Hungarian link all should be up when it begins