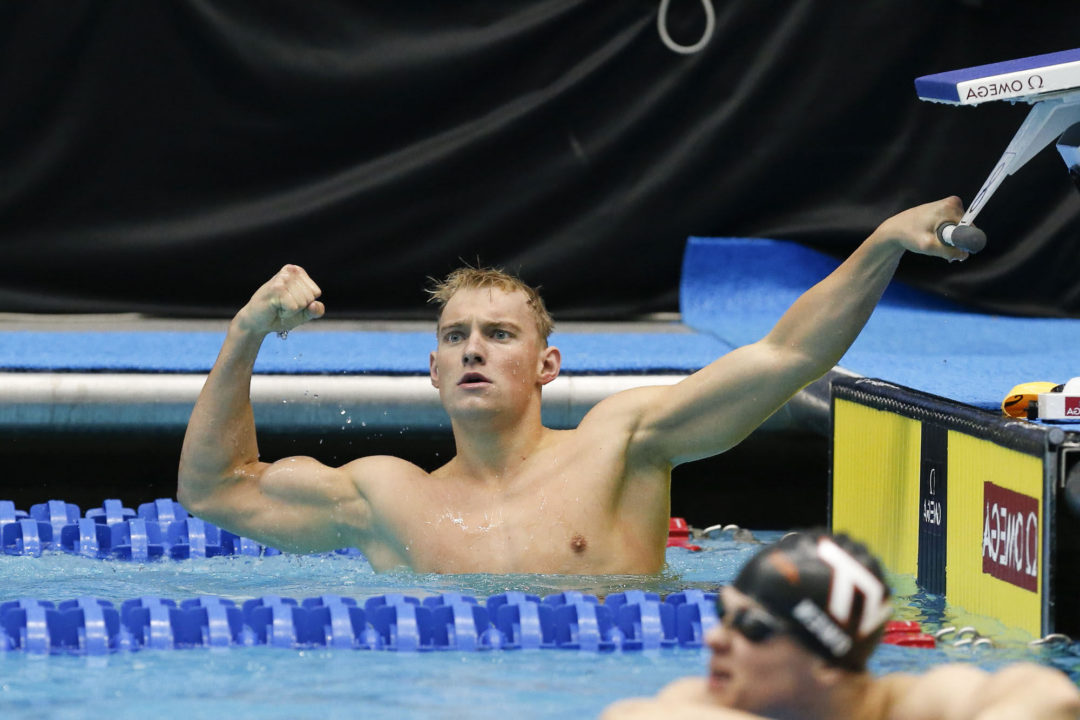 Our top spot has gone back and forth between Cal and Texas all year, and this edition is no exception as the two trade their ranks from our most recent rankings. Archive photo via Tim Binning/TheSwimPictures.com

As we head into conference championship season, it’s time for our penultimate NCAA Power Rankings on the men’s side. Our top spot has gone back and forth between Cal and Texas all year, and this edition is no exception as the two trade their ranks from our most recent rankings.

Texas started the year #1, but Cal took over that rank after the fall dual meet season. We put Texas (narrowly) back at #1 after winter invites, but now Cal has surged back to the top heading into the conference rounds.

Denver has developed a stud sprinter (Sid Farber) and a great backstroker (Anton Loncar) who pair for excellent relays. -JA

Sid Farber and Anton Loncar have positioned themselves nicely to be able to score at the NCAAs, and Denver’s 200 and 400 free relays are in great shape. They’ll need more fly and breast speed to be able make their medley relays contenders, and propel them higher in the rankings. -SP

Did you know that Missouri graduated 3 of 4 legs from last year’s NCAA third-place 400 medley relay, yet somehow still ranks 4th in the nation this season? This team has way more fast swimmers than big names. Expect to be surprised by one or two little-known Tigers this postseason. -JA

Grand Canyon is out to make a statement in its first year of NCAA eligibility. Can the medley relay repeat its stellar mid-season performance? -JA

Grand Canyon has a lot going for them, with great backstroke speed out of Mark Nikolaev, Youssef El Kamash in the breast events, and a lot of speed on the all relays except the 800 free relay. -SP

There won’t be many point-scorers, but Steele Johnson should be one of the top overall individual scorers, swimming or diving. -JA

Louisville has a lot of nice pieces through fly and breaststroke, but their medley relays are suffering from the lack of a true stud sprinter. That said, Andrej Barna hit a lifetime-best 50 free back in November, and a big ACC meet from him could launch the Cardinal relays into orbit. -JA

Brandonn Almeida wasn’t earth-shattering in his debut, but don’t underestimate his potential impact in a loaded distance group. -JA

Zach Apple and Hugo Gonzalez continue to look good in January, but there’s a steep drop-off after those two stars. -RG

Diving transfer Colin Zeng is going to add 35+ points to a team that’s sneaky-good in the pool. -JA

Tennessee has a lot of scoring ability in relays, as well as some individual performers to back it up. The addition of Colin Zeng in diving has given them top 10 potential. -SP

Gunnar Bentz is back. That’s huge. But unless he’s bringing three 19-second freestylers back from injured reserve with him, this team is going to struggle for relay points. -JA

No doubt Gunnar Bentz returning is huge for the Bulldogs, however, they’ve somewhat underperformed this season. They definitely shouldn’t be counted out, but Georgia’s going to need to have a great showing at the SECs. -SP

These Aggies aren’t going away. Mauro Castillo is still somewhat overlooked as an NCAA title contender in breaststroke – can he put himself fully on the radar with a big SEC performance? -JA

A win over Texas shows how far this team has come the past few years. It also solidifies the sense that they can crack the top ten, but it’s hard to see them moving up much more. – RG

Don’t let a bad loss to Ohio State fool you. Alabama was victimized in distance free and diving, but this roster is still built for big NCAA points. -JA

The Wolverines have continued to impress me the entire season. They are 1st or 2nd in all the relays in the Big Ten, and have, in my opinion, the 2nd best all-around freestyle squad in the NCAA (behind Stanford) as well as one of the deepest IM squads. -SP

Just like with #1/2 and #3/4, I keep going back and forth Stanford and Indiana. Right now, Stanford gets the edge only because some of the Hoosiers’ key swimmers have consistently performed better at Big Tens than NCAAs the past few years. -RG

Stanford’s free group is phenomenal, and more importantly, they have the ability to score in every single swimming event, including the relays. That will make them very dangerous at the NCAAs. -SP

Most of the relay ranks don’t yet include Caeleb Dressel, but the Gators currently have a lot of ground to make up on NC State. -JA

Do we even know who will swim what relay for NC State? The Pack runs deep with versatile talents like Ryan Held, Jacob Molacek, Justin Ress and Andreas Vazaios, giving the coaching staff myriad relay options at ACCs. -JA

Too many stars to not show up at NCAAs. Plus a big diving advantage. -JA

If you trust the Texas taper, there’s no reason to be unduly worried about the Longhorns’ loss to ASU. There’s more reason to be worried about John Shebat not swimming the past two weekends, even if he’s now supposed to be back for the postseason. – RG

Every time I’ve crunched the numbers, Cal comes out ahead by 10-20 points. A single DQ or sub-par morning swim could make the difference at NCs. – RG

I think it’s safe to say it will be a bloodbath between Cal and Texas at the NCAAs, and while Texas probably has more star power, I think Cal has more momentum going into their conference meet. That can make a big difference going into taper. -SP

Cal might have the best relays in the nation as a whole. Ryan Hoffer is starting to look like a true budding star again. -JA

So the swimmers will jump instead of dive into the pool at start of races???

GOtennesseeSwimmingandDIVING! We gonna shock all the doubters this year rolling past ALLSEC schools at NCAAs except UF>

TENNESSEE, Stanford, CAL, Texas, NC ST, Indiana, MICHIGAN , USC and TEXAS A+M are the ONLY schools which will have both the Women’s and Men’s Team in the TOP TEN at NCAAS. The ELITE TEAMS of Swimming and Diving!!! Go Vols.

Vote Up1-5Vote Down Reply
JP input is too short

I mean, if 9 teams have both men and women in the top 10… that’s not all that exclusive a group relatively speaking… right?

True! JP you pretty sharp. Guess the only truly elite teams this year will be Stanford Women and Cal or Texas Men!

No love for Harvard. Sad!

I think Harvard definitely has the potential to be in the top 20, I’m just waiting to see what they do at the Ivies.

Vote Up30-2Vote Down Reply
JP input is too short

Their 52 breaststroker from last year McNamara hasn’t swam a meet this year, so I’m assuming he either is hurt or retired… if he were swimming, Harvard would have some REALLY scary medley relays. Like, their 200 MR could be contending for the title.

JP, they could just have Dean Farris swim a 200 IM

Actually, McNamara only split 24.2 at Ivies last year. Over the weekend, Sebastian Lutz split 24.5. I think it’s a bit hyperbolic to say Harvard would be contending for an NCAA title when that relay didn’t even qualify for NCAAs last year. They could certainly score this year, but they’ll need a 19 from Tan and another 18.8 or better from Farris and even that will need their backstroker to drop below 22 and the breaststroker sub-24. That puts them 1:24-low, which would have been between 10th and 13th last year.

Vote Up8-1Vote Down Reply
JP input is too short

There’s a chance that their best 200 MR comes with Farris on backstroke actually. A marginally slower anchor leg from O’Hara (he anchored relays in 19.2 and 19.3 this past weekend and has split as fast as 19.1) might be worth it for potentially in the range of a second faster backstroke leg compared to Osada.

Or, I might be completely overestimating Farris’s 50 back ability. He was 22.0 in their first meet this season.

No, I think you’re probably right. Farris/Lutz/Tan/O’Hara is seemingly a better option. I stand by Harvard as a potential scorer, not a title contender, though.

Vote Up130Vote Down Reply
JP input is too short

You’re probably right. It’ll be interesting to see if Lutz can muscle out something good despite not being a true breaststroker. The rest of their legs are A finals worthy.

Contending for a title!!! HAHAHAHA no way. They would need someone going at least 20.5 back… 23.0 breast… 19.8 fly which they might have, and an 18 low free which Dean Farris may or may not be able to do.

If Texas isn’t hot at NCAAs, I think UF and maybe even NCst move ahead of them. Eddie knows what he is doing but sometimes he misses…..just not that often.
I also question Michigan being that high. Not sure their relays are that strong but we will see In March

Vote Up21-7Vote Down Reply
JP input is too short

Their sprint free relays will be lights-out. They need a backstroker to step up, and I’m not sure if they have the 200 free depth they usually do – their sprinters are all drop-dead sprinters and most of their longer free guys tend toward the 500-1650 side. Auboeck is really the only guy that bridges the gap.

JP input is too short is talking about Michigan not Texas.