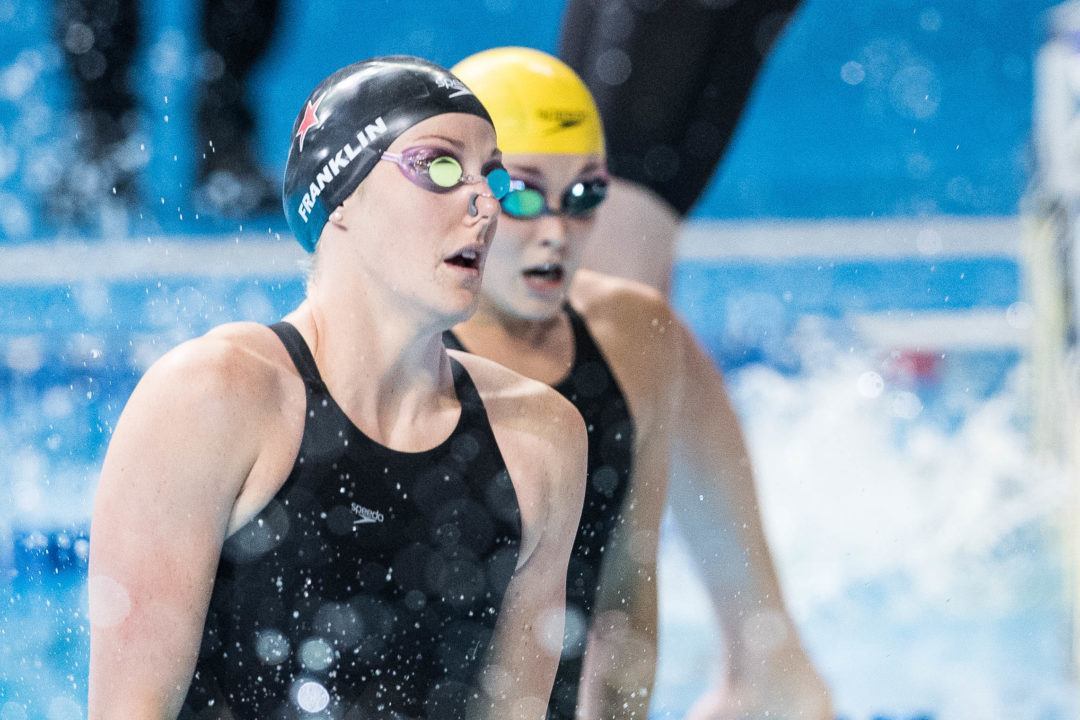 On night three action returns to Omaha where six more roster spots are on the line for swimmers hoping to punch in their tickets to the 2016 Rio Olympic Games. Current photo via Mike Lewis/Ola Vista Photography

On night three action returns to Omaha where six more roster spots are on the line for swimmers hoping to punch in their tickets to the 2016 Rio Olympic Games.

The men’s 200m freestyle will feature Ryan Lochte‘s second attempt to try and add an individual event for Rio. So far he’s been unsuccessful, finishing third in the 400m IM on night one. If he makes it in the top six, he’s almost certainly a lock for a relay.

Olivia Smoliga will be looking to hold onto her top spot in the women’s 100m backstroke with two charging 100m backstroke Olympic gold medallists chasing her down from the outside lanes. Missy Franklin and Natalie Coughlin qualified for the final seventh and eighth.

Lilly King and Molly Hannis are in a great position to lead the new wave of American breaststroke swimming. Katie Meili and Jessica Hardy are the two swimmers who could displace either of the two leaders in tonight’s finals.

If the past two days are indicitive of tonight, anything is possible.

There’s plenty of semifinal action to be had as well including Michael Phelps first evening swim in the 200m butterfly.

Katie Ledecky was even faster tonight than she was this morning, throwing down a 1:55.10 to easily win her heat ahead of Melanie Margalis and Cierra Runge. She looked cool and collected as she flew out to a body-length and change lead at the 100 and held onto that towards the touch.

Although Ledecky stole the show with the fastest time, the first semifinal had the bulk of the finalists in it. Simone Manuel took things out fast, pushing herself way ahead of the rest of the field demonstrating the speed thats helped her become one of the fastest sprinters in the country.

On the back half, Leah Smith, Allison Schmitt, and Missy Franklin all began to catch up, and eventually passed her heading into the wall. Smith was the winner in 1:56.73 with Schmitt right behind her in 1:57.01. Franklin took third in 1:57.33 with Manuel fading to fourth in 1:57.82.

Katie McLaughlin was the eighth fastest, getting the last final spot. She was a 1:58.43 in the first semifinal.

For the second time this week, Ryan Lochte failed to qualify for an individual event for the 2016 Rio Olympic Games.

After 50 meters Lochte was out with the leaders; Townley Haas and Conor Dwyer. A huge first turn put him in front of them as they charged to the halfway point. Dwyer turned first in 51.09, Lochte was right behind him in 51.40.

With 100 meters to go, Townley Haas began to creep up on Dwyer and Lochte. At the 150 meter mark it was Dwyer-Haas-Lochte. A huge last turn once again put Lochte in the hunt for the win, but Dwyer and Haas chased him down. Texas’ Jack Conger began to rev his engines and catch up to the front pack. Heading into the wall it was all too close to call.

Twenty meters to go and Lochte began to fade. Haas passed him, and Conger passed him as they all raced towards the wall chasing down Dwyer.

Ten meters to go, and Haas began to really charge on Dwyer. As they all stretched into the wall Haas got the magic touch with a 1:45.66 to Dwyer’s 1:45.67 to punch in his ticket to Rio. Jack Conger ran out of pool and couldn’t take down the two leaders, ultimately finishing third with a 1:45.77.

Lochte touched fourth in 1:46.62, short of an individual roster spot, but good enough to be a lock for America’s 4x200m freestyle relay.

Gunnar Bentz touched in for fifth, Clark Smith finished right behind him. Both swimmers are going to have to wait to see if they’re added to the Rio roster for the relay.

Tyler Clary finished seventh, outside of a relay position, and has yet to make the team.

Olivia Smoliga and Kathleen Baker are going to Rio.

In one of the most anticipated finals of the night, Smoliga and Baker managed to hold on to their positions as the top 100m backstrokers after the semifinals by finishing first and second. Smoliga charged on the last 20 meters and pushed out in front to grab the win in 59.02.

Baker wasn’t far behind her in 59.21. Amy Bilquist touched in third in 59.37 just 0.16 seconds off qualifying for her first Olympic team.

After taking the seventh and eighth seeds in the 100m backstroke after semifinals it was clear that Missy Franklin and Natalie Coughlin were going to have their work cut out for them.

Between the two of them, they make up the last three Olympic gold medals in the 100m backstroke, and neither of them will get the chance to add another one this time around. Franklin turned in eighth, and wasn’t able to make much of a push at the end of the race, ultimately finishing in seventh with a 1:00.24. Coughlin faded to eighth, clocking in a 1:00.48.

Plummer and Murphy began to distance themselves in the final stretch from Grevers as Jacob Pebley began to creep up. Murphy got his hand on the wall first securing his spot on the Olympic roster  in 52.26 with Plummer second just two one-hundredths behind him in 52.28.

Lilly King has had an incredible season; she was electric at the NCAA Championships, and now just a few short months later she’s secured her spot on the Olympic roster to represent the stars and stripes in Rio.

King was out first with Katie Meili hot on her trail, but in the last 25-meters she closed strongly to put up a 1:05.20. That time for King is the fastest time in the world this year, distancing herself from previous world number one Yulia Efimova by exactly half-a-second.

Meili was a safe second behind King in 1:06.07, putting up the sixth fastest time in the world this season. Molly Hannis touched behind Meili in 1:06.65 for third.

Breeja Larson took advantage of the opportunity she was given to swim in the championship final. She qualified ninth after prelims, but a scratch by Melanie Margalis bumped her into the final. The 2012 Olympic Trials champ finished fourth in 1:07.53.

Michael Phelps cruised through the second semifinal of the men’s 200m butterfly smooth as can be in the water, dropping a 1:55.17 to lead the way through the semis into tomorrow night’s finals.

While he looked great in the pool, his turn at the 100-meter wall was off. Rather than glide in for a long touch, Phelps opted for a half stroke into the wall and came in hard. This morning he wasn’t pleased with his third turn, “third turn was bad. Awful. Killed all the momentum,” Phelps said.

At the touch tonight, Phelps looked disappointed in his swim before he even turned around and saw the time.

Although he might not be 100 per cent pleased with his turns, Phelps is still the heavy favorite heading into the final, the real race is a race for second.

Pace Clark was the second fastest this evening, dropping a 1:56.27 to win the first semifinal ahead of Cal’s Tom Shields. Shields was a 1:56.35, right on Clark’s tail. Chase Kalisz wasn’t too far behind them either sporting a 1:56.48.

The race for second will be a tight one, also in the mix is Gunnar Bentz who went a 1:56.82 in the second semifinal and Zach Harding to clocked in behind him in 1:56.99.

In the final event of the night Maya DiRado once again topped the list and is one more swim away from establishing herself as the current undisputed best female IMer in the United States.

DiRado came in with a 2:10.09 tonight, over a second faster than what she was to lead the heats this morning.

Melanie Margalis finished second behind DiRado in the second semifinal with a 2:10.41. Margalis’ breaststroke split of 37.23 is what put her in contention with DiRado.

The final times in each race are only the end result. A race is won by much more than a time; it’s won by underwaters, stroke rate, turn time, DPS, and much more. See what went into these spectacular swims in the Finals of the 2016 U.S. Olympic Trials in Omaha through a TritonWear lens!

Thanks for posting – but NBC yutube channel are posting each final , every day . Found that yesterday ….

I try to post race videos but it’s weird.
I post the link in another article and the video appears.
Here only the link appears.

No, unless either Murphy or Plummer decides not to swim 100 back and US coaches decide to give the slot to Grevers, which is highly unlikely in both situation.
Each country can only field a maximum of 2 swimmers per individual event, on the condition both swimmers have time equal or faster than FINA A qualifying times (which is not an issue for Grevers as he has swum way faster than FINA A).