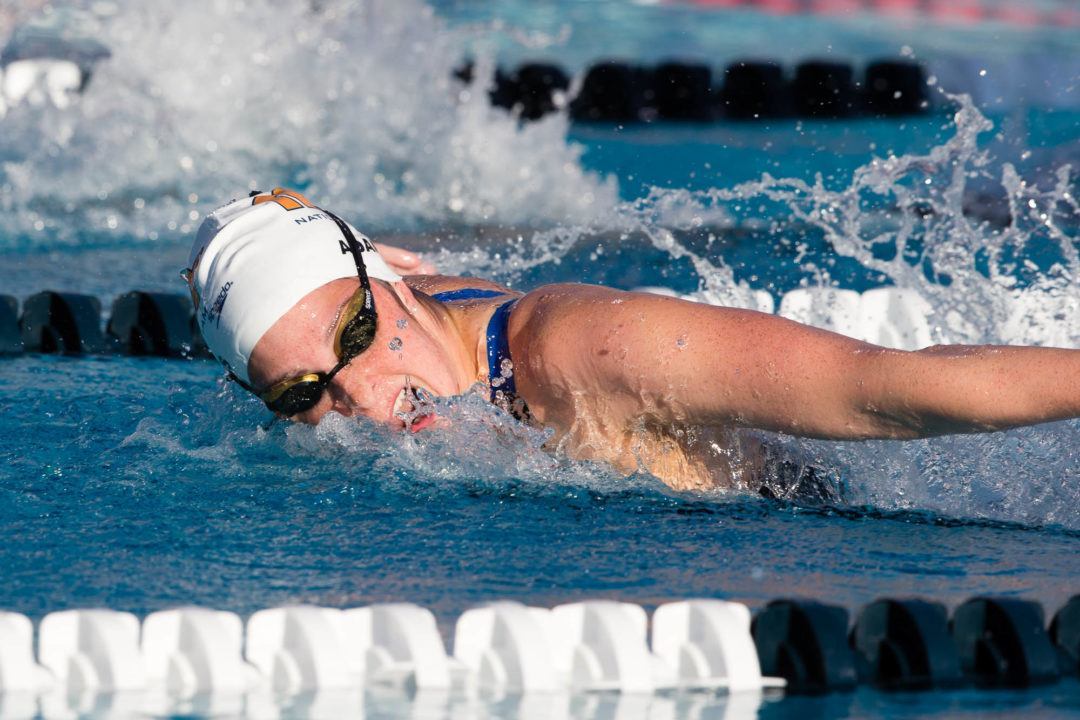 Original report is below.

2012 U.S. Olympian Cammile Adams, who was a heavy favorite to make the Olympic Team again this year in the 200 fly and expected to contend for a medal, has been disqualified in the event’s preliminaries.

The judges determined that she was “not fully rotated onto her breast,” or in other words came off a turn on her back.

She swam a 2:08.29 in the preliminaries, which was the fastest time of the entire field in the morning heats.

The 24-year old Adams was the 2015 World Championships silver medalist in the 200 fly and won the gold at the Pan Pac Championships the year before.

As we report this, we saw Cammile Adams, who rushed off deck in the middle of an interview with NBC, re-emerge from the athlete’s area with her coach David Marsh, who is also the head coach of the women’s U.S. Olympic Team, in what appeared to be an attempt to protest. While disqualifications can not be called on the basis of camera angles, all disqualifications are reviewed and confirmed before they’re made official.

We’ll continue to follow any protests as they may emerge.

This is so stupid.i know officials have a job to do but something like that which did not benefit her time should not be called. If this stands the USA has lost their best chance at a medal in this event.

So in pursuit of a medal America shouldn’t be the gold standard when it comes to rules and fairness?

Like Australia getting Thorpe on the 400 free in 2000 by pressuring the second place finisher at their trials to give up his spot ? Or Jamaica pressuring peta Gaye dowdy to give up her spot to ottey in the 100 meters ?

Whether or not the infraction benefitted a swimmer’s time is irrelevant. If there is a rule that was broken the official has to call it whether or not it yielded a competitive advantage.

101.3.4: “The shoulders must be at or past the vertical toward the breast when the swimmer leaves the wall.”

This can’t be happening. So upsetting. One of my absolute favorite swimmers. Always consistent and always performs when needed. We need her on the team.

So Happy for Cammile that this call was Overturned!!!