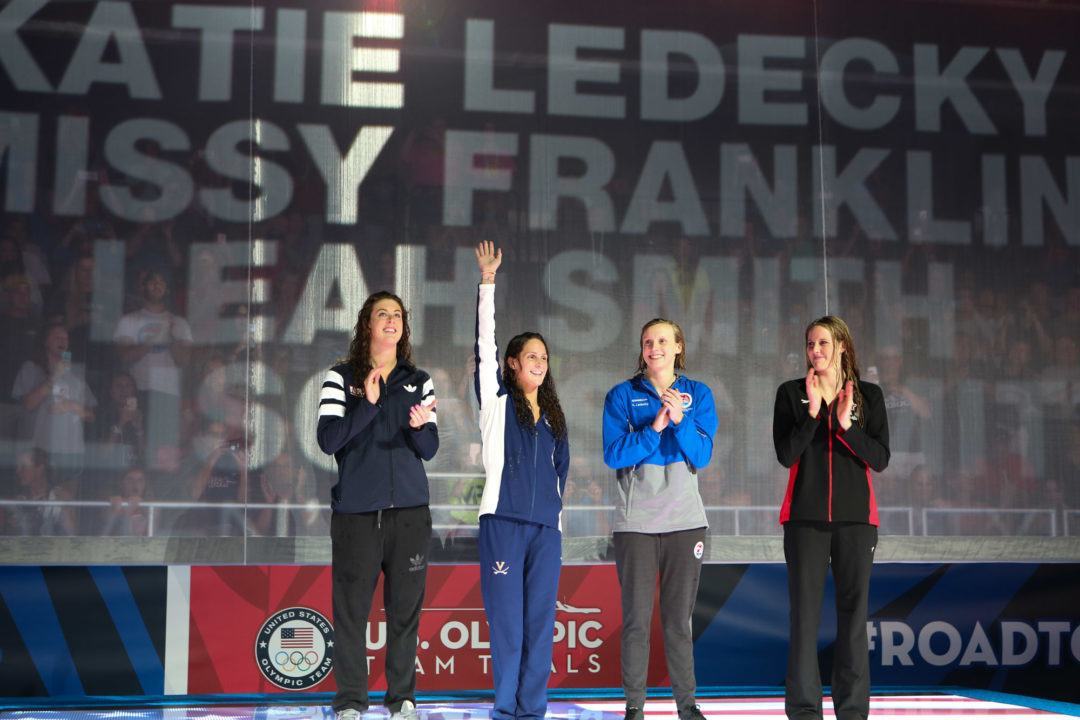 The American quartet will be chasing gold as well as the Chinese World Record of 7:42.08. Current photo via Tim Binning/TheSwimPictures.com

The Americans are the defending Olympic and World Champions in this relay, and they’ve assembled another elite squad for Rio.

Katie Ledecky is the #1 player here for the Americans, a contender for the individual gold in the 200 free and the likely anchor for the relay. The Americans return defending Olympic champion Allison Schmitt, along with 200 free American record holder in yards, Missy Franklin. Schmitt and Franklin are not in the same form they were in when the USA won gold in London in this event, but they’ll account for two 1:56-lows at the least, and we’ll probably see a bit more out of both of them as they are two of the most experienced women on the American team. #4 should be Leah Smith, who had the best long course meet of her life at the Olympic Trials. She nearly toppled Franklin for the 2nd individual spot in this event on the Olympic team behind Ledecky, and with the consistent 1:56’s she’s been churning out this season, a time in the 1:55 high range is plausible for her.

Franklin, Schmitt, and Smith will likely average 1:55 high’s between the three of them, and giving Ledecky a 1:54.0 on the anchor leg, that would put the Americans at 7:42.0 or so, which is right at China’s 2009 world record. Franklin and Schmitt are proven performers in high pressure situations, and Smith was great on this relay at the 2015 World Championships. Out of the four of them, Ledecky and Franklin can be expected to be the quicker of the four, and three-time world record holder Ledecky could absolutely throw down a monster time well under 1:54, especially if the Americans have stiff competition when she dives in.

Ledecky’s one of several women who could blast a 1:54-low or better with a rolling start– Sarah Sjostrom sits at the top of that list of potential big splits. She led off Sweden’s relay in Kazan with a 1:54.31, and she dropped a 1:54.34 a couple weeks ago at the Swedish Open. Her first leg in Kazan was so powerful that Sweden actually held the lead through 600 meters, but a 2:00 anchor leg sunk them to 4th, just off of the podium.

An important upgrade for them, though, comes with Michelle Coleman‘s improvement. She was just 1:57.36 with a rolling start last summer, but dropped a 1:55.8 in June and a 1:56.0 in January. Provided she splits around a 1:55 high this summer (and with the potential to be even faster), Sweden now has two very strong legs in this relay, plus Louise Hansson who split a 1:57 in Kazan. Ida Marko Varga, the 2:00 split last season, and Stina Gardell represent the potential 4th legs for this relay.

With a big question mark surrounding the quality of the other half of Sweden’s relay, China looks to be a contender for silver. Young Shen Duo, a former World Junior record holder, leads the way with a 1:55.82 from Chinese Nationals. Between the even younger Ai Yanhan (she, who posted a 1:56.46 at Chinese Nationals, and Shen, the Chinese have a powerful 1-2 punch. They have no 1:54-or-better hammer leg, but the Chinese do have Wang Shijia and Dong Jie, who each were 1:57’s this spring. Qiu Yuhan , who was 1:55.84 this spring, was not selected to China’s Olympic roster, drops China from being “the only team capable of contending with the U.S.” to probably outside of the medals.

Without Qiu and Zhang, Australia could have the edge for silver. Rising star Emma McKeon blasted a 1:54.83 at the Aussie Trials, and her and Bronte Barratt pack a 1-2 punch similar to that of Ledecky and Franklin or Sjostrom and Coleman. The Australians don’t have terribly strong 3rd and 4th options, though Madeline Groves and Leah Neale have experience on the international stage and will provide decent splits. Depending on what McKeon and Barratt can provide, the Aussies could be the silver medalists ahead of China and Sweden.

Another swimmer that could throw down a huge split is Italy’s Federica Pellegrini, who anchored Italy’s silver medal team in Kazan with a 1:54.73. She’s shown incredible form this year, including a lifetime best in the 100 free, but the Italians need a lot more from their supporting cast if they’re going to challenge the podium.

Hungary and the Netherlands are two other nations that have similar issues. Katinka Hosszu and Femke Heemskerk are capable of big splits (especially Hosszu, who is far more dependable at this distance than the Dutch sprint star), but there isn’t much after that to keep these teams in the mix with the podium challengers.

Great Britain and Canada could certainly do big things here, too. GBR saw Jazz Carlin split a 1:56.35 in Kazan last year, and Siobhan Marie O’Connor is capable of a similar split in Rio, while Eleanor Faulkner could certainly split under 1:58 with a rolling start. Canada boasts Brittany Maclean along with youngsters Taylor Ruck and Penny Oleksiak, and all three could potentially split 1:56’s, which would be huge. France, too, could final with leaders Charlotte Bonnet (1:56.32 this year) and Coralie Balmy (1:57.18 this year).

That’s under WELL under 7:40.
Although that’s not going to happen, it’s safe to say that anything that isn’t under the world record of 7:42 would clearly leave something to be desired for the Americans. I’m excited to see them go for it.

If to consider that relay start is about 0.5 sec faster then you are suggesting that Franklin will be a weakest link. Also very optimistic time for Schmitt and Smith. Remember that favorite team is strongly instructed by coaches to be careful with exchanges. Ledecky splitting under 1:54 is the only real hope for beating shiny suits world record. The Olympic record however has little chance to remain unbroken.

FRANKLIN WILL BE FASTER, BUT SMITH WILL BE SLOWER THAN YOUR PREDICTION….OFCOURSE LEDECKY WILL SWIM 1:53 LOW IN RIO…..

The prelims session for these relays becomes more interesting as more nations are able to press for a spot in the final, and with most nations using their best combination to qualify. In the recent past a 7:55 time in prelims would assure a lane in finals, but now top nations like AUS and USA also need to make sure the morning relay can be 7:50 or better with their B squads which may put some pressure on the traditional “save it for the evening” strategy.