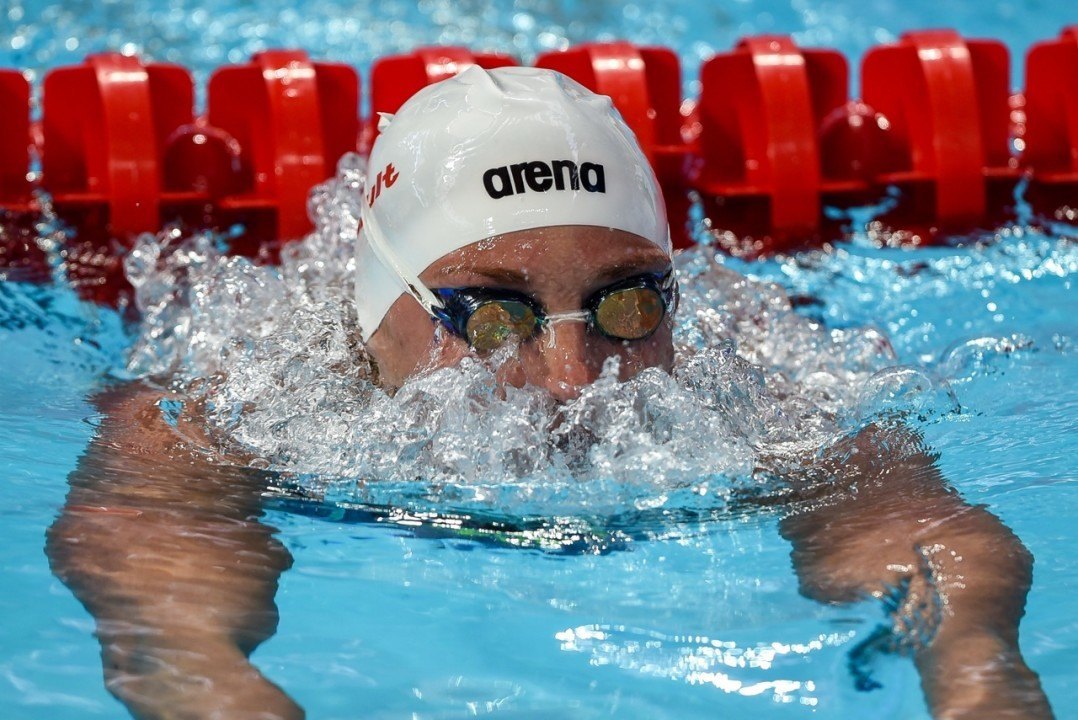 With Day 1's finals cancelled due to alarming haze levels in the open air OCBC Aquatic Center, athletes are more than ready to throw down some speed on Day 2 of the FINA World Cup Singapore Archive photo via Peter Sukenik/www.petersukenik.com

It was yet another Campbell Sister 1-2 finish in the women’s 100 freestyle, with elder sister Cate taking the top prize. Cate threw down a swift 53.09 for the win (25.57/27.52), followed closely by sister Bronte who touched in 53.58. This is the 4th time this year that the Australian duo has taken gold and silver in a single World Cup event, with Cate leading each time. Katinka Hosszu swam her way to bronze in tonight’s 100 free in a time of 54.23. USA’s Madison Kennedy was the only other sub-55 swimmer, placing 4th in 54.81.

Australia claimed another win right away tonight, in the form of Dan Smith‘s victory in the 200 freestyle, marking Smith’s 4th straight World Cup gold in the event.  Smith’s time of 1:48.15 was a bit off his winning 1:46.70 from Beijing earlier this week, but was enough to hold off the rest of the field, which included 5 Singaporeans.  Of the 5, one Singapore local athlete placed on the podium, with Kai Quan Yeo tying Japan’s Masato Sakai for 2nd place, both scoring a time of 1:51.07.

Jamaica’s Alia Atkinson took her 14th gold medal in this event at a World Cup, charging to the wall first tonight in 30.74.  Australian Sally Hunter blazed into 2nd place in a tie of 31.50, with USA’s Micah Lawrence right behind in 31.66.  Atkinson has won this event in 12 of her last 13 appearances at a World Cup – quite a streak.  With Hunter’s silver, the Aussies are 3-for-3 in podium appearances so far tonight in Singapore.

Winning his 9th World Cup gold of the 2015 series, South African Cameron Van der Burgh nabbed the 100 breast victory in the only sub-minute time of the field – 59.38.  This means that VDB is unbeaten thus far this year in the event at the World Cup and well on his way to potentially becoming the top earner this series.  USA’s Kevin Cordes, who trains under Coach Sergio Lopez in Singapore, finished with silver tonight in 1:00.81, with China’s Li Xiang swimming to bronze in 1:01.03.

Straight off his silver medal in the 200 free, Japan’s Masato Sakai claimed the gold in tonight’s 100 fly, clocking a time of 53.53.  Sakai also won this same event earlier this week in Beijing, where he registered an almost identical time of 53.52.  We saw our 2nd tie of the evening for silver, this time between Russia’s Viacheslav Prudnikov and Singapore’s Zheng Wen Quah, who both touched in 53.66 behind Sakai.

2015’s double backstroke world champion, Emily Seebohm, scored another victory in the 100m backstroke race, chalking up her 5th straight World Cup gold medal in the event.  58.72 was Seebohm’s commanding time, clearing the field by over a second.  Katinka Hosszu stayed strong for silver in 1:00.07, with American Missy Franklin holding on for bronze in 1:00.73.  Franklin was a tenth faster earlier in Beijing (1:00.61), but finished 4th at that stop of the World Cup.

Aussie Ash Delaney took the 50 back win in a time of 25.30, earning his 2nd gold of the World Cup season. Singapore local Zheng Wen Quah doubled up on his silver in the 100 fly to win another runner-up medal in this race.  25.50 was Quah’s time, with Japan’s Yuki Shirai finishing in 3rd in 25.91.

Hungary’s Zsuzsanna Jakabos blew away the field tonight, winning the women’s 2fly race by more than 4 solid seconds.  Jakabos’ time of 2:08.65 crushed the 2:09.90 mark she registered earlier this week for the win in Beijing, and was well ahead of tonight’s silver place finisher, Zhou Min from China (2:12.70).  Hungarian teammate Katinka Hosszu, in her 3rd event so far, touched in 2:13.99 for bronze.

Russia landed on top of the podium for the first time tonight, as Semen Makovich clocked a 2:01.76 in the men’s 200 IM to win the race.  In Beijing just this past week, Makovich wound up 4th in a time of 2:04.30, so the 20 year old managed more than a 2-second improvement.  Australian comeback kid Kenneth To broke through for silver in a time of 2:02.12 to hold off a charging Hungarian, David Verraszto, who would settle for bronze in 2:02.76. Interestingly, each of the 2015 World Cup’s 200 IM races have been won by a different swimmer.

The Hungarian head-to-head race between Hosszu and Jakabos resulted in the #IronLady coming out on top with a winning time of 4:12.00. This is Hosszu’s 6th gold medal in this event across her World Cup appearances and her 1st gold tonight after having already won a silver and 2 bronze medals at the OCBC Aquatic Center.  Jakabos’ time of 4:14.75 was enough for silver, with Aussie Jessica Pengelly sliding into 3rd place with a time of 4:19.44.

No sub-22’s in tonight’s 50 free final, but a thrilling race nonetheless, with Japan’s Katsumi Nakamura claiming his 3rd straight World Cup gold medal in the event.  Nakamura clenched the victory in a time of 22.47 to remain unbeaten thus far in the 2015 World Cup. But, the young stud Kyle Chalmers from Australia is right on his heels, swimming to silver in a time of 22.52.  Chalmers participated in both the Senior and Junior World Championships over the summer, swimming in the 4×100 freestyle and 4×100 medley relays in Kazan.  Bronze tonight went to another Aussie, Te Haumi Maxwell, who clocked a time of 22.68.

After earning a bronze in the 50m breast earlier tonight, USA’s Micah Lawrence pulled away with her first World Cup gold medal in the 100m distance of her specialty stroke.  2:25.89 was the mark for Lawrence to hold off a charging Russian, Vitalina Simonova, who was looking for her 4th overall World Cup win in the event this season. Simonova would have to settle for silver in tonight’s race, registering a 2:27.42 for her efforts ahead of Australian Sally Hunter who picked up bronze in 2:27.96.

Winning his 2nd consecutive World Cup gold in the event, Japan’s Yuki Shirai came out on top of tonight’s 200 back race in a time of 1:57.96, just .02 off his 1:57.98 that won earlier this week in Beijing.  Ash Delaney (AUS) followed up his Beijing with silver with another 2nd place finish here, touching in 1:58.66.  Colombian swimmer Omar Pinzon ended up with bronze in a time of 2:02.11. For Shirai, he just collected his 10th gold medal in this event at the World Cup.

As expected, Denmark’s blazing butterflier, Jeanette Ottesen, makes her mark on Singapore, winning the 50m event in a time of 25.84.  This is just .03 of a second off her gold medal-winning 25.81 time from Beijing earlier this week.  Silver tonight goes to Australia’s Holly Barratt (26.57), while bronze is shared by two swimmers – France’s Melanie Henique and Jamaica’s Alia Atkinson – who each finished in 26.78.

Scary level of consistency from Seebohm. Fit & healthy next year; she’s going to hard to beat over 100.

Similar levels of consistency from C1 & VDB; C2 not quite there as regards consistent stellar (as against quick) times but seems to be tracking that way.

Yes, it’s crazy to see the crazy high level of consistency at a crazy high level by Campbell, Seebohm and CVDB week after week. Hosszu has given ideas to some other big names. 53.09!/58.72!/59.38! In October. Crazy!
On the opposite you have swimmers like Kevin Cordes or Missy Franklin who are unable to swim fast if they are not fully tapered.

NB: why I’m not passionate by this world cup season? If I see the number of comments on swimswam world cup stage after world cup stage, I think I’m not the only one. Honestly, I don’t even read the results very closely. I don’t know. Looks like the results are always the same with the same swimmers who… Read more »

I have to agree, but part of it was that these swimmers don’t get to swim short course that often, so many of them take advantage ofbit and swim fast, here only a select few are doing that.

Bobo, these are LCM meets this season rather than the usual SCM format. It could be that for many, they’ve “drawn a line under” their LCM racing for 2015. In AUS, the (short) SCM season is underway but a large percentage of major names aren’t bothering …. with a few of the “guns” plus some 2nd stringers/youngsters are making some forays on the Wcup series to boost the bank balance.