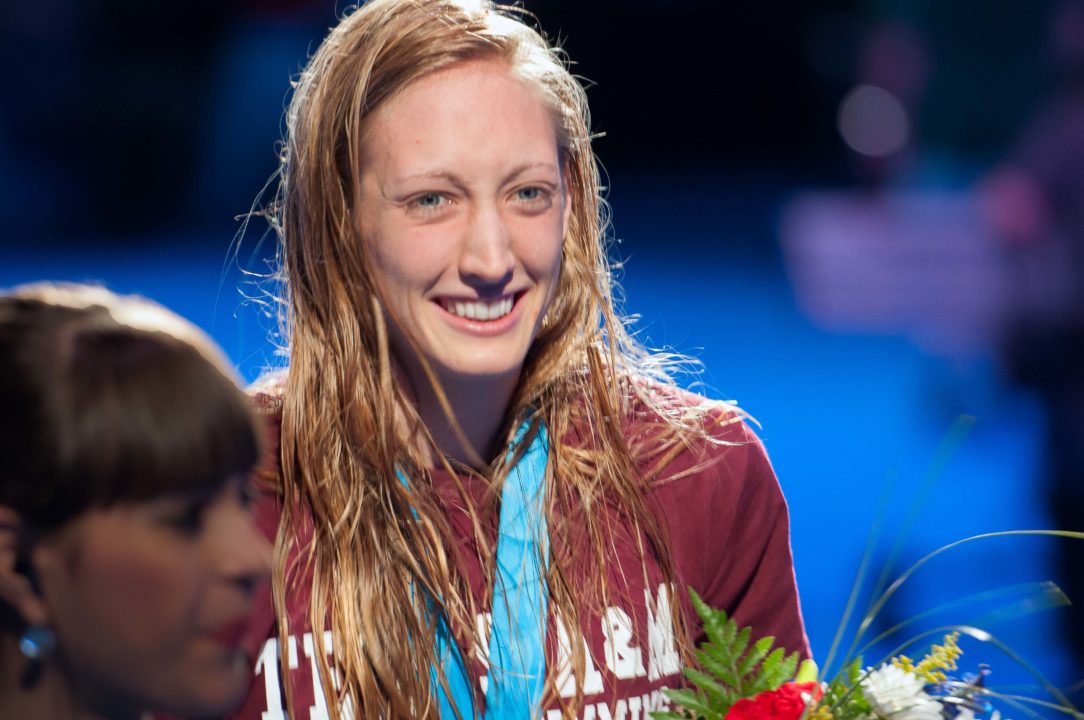 The Texas A&M Aggies have the one swim/swimmer that nobody else in the country can touch: Breeja Larson's 100 breaststroke. (Photo Courtesy: Tim Binning/TheSwimPictures.com)

Just like in the free relays, this 400 medley relay is a lot less convoluted than the 200 was. Cal still has some options, but at Pac 12’s, they used Tran on backstroke, Bootsma on fly, and Liz Pelton on the freestyle anchor, and we expect that same relay to pop up again.

For the Aggies, this is a relay that has been simmering for a while. They were outstanding as freshmen, then as sophomores, and now as juniors (all four swimmers are in the same class, though a redshirt leaves Lili Ibanez classified as a sophomore) they have the experience to break through. The weakest legs on their 200 medley are the butterfly and the freestyle. With Ibanez taking over the anchor in this longer relay, and Caroline McElhany getting better as the butterflies get longer, this race is just perfect for them. Of course, they have Breeja Larson, who is really far ahead of anybody else in this race, ever. Even without a taper, she swam the fastest 100 yard breastroke in history at SEC’s. Be shocked if she doesn’t split a 56 at NCAA’s in this relay, which should give A&M a 1.5 second advantage over every0ne except maybe Caitlin Leverenz and Cal. The Aggies also need to be faster in finals than they were in prelims to pull off a win: something they failed to do in either medley last season.

This relay, to me, comes down to the above two and Arizona. The Wildcats lost Sarah Denninghoff to a Texas transfer, but added Megan Lafferty so they’ll put her on the butterfly and shift Lauren Smart to backstroke. That basically makes this relay a wash with their runner-up 3:29.13 from last season, except with another year to get faster (see: Margo Geer).

Georgia’s 400 medley relay, as compared to their 200, is much, much better. They can put Megan Romano on the backstroke leg (she’s one of the best in the country, even though the Bulldogs have opted not to swim her in that race individually) and Allison Schmitt on the anchor. Added to butterflier Lauren Harrington, who’s having a breakout season as a sophomore, and Melanie Margalis, who has put some mettle into this shorter breaststroke this year, that’s a top 8 relay.

USC’s back three legs of Kasey Carlson, Kendyl Stewart, and Kasia Wilk are great. Last year, in finals, they were two seconds behind the lead-pack after just the backstroke leg, though. Yumi So has taken over that spot this season, though, so they’ll hope for better. Wilk is a very good anchor for a freshman, but even she isn’t good enough to make up that kind of deficit against the likes of Margo Geer et. al.

Tennessee’s 400 medley at SEC’s, surprisingly, wasn’t as good as their 200, and they were only 3:31.80. That though was almost entirely in the hands of sophomore breaststroker Molly Hannis, who after an emotional, high-intensity battle with A&M’s Larson in the 100 breaststroke earlier in the session looked drained. If she splits a 58-low in this relay, and backstroker Lauren Solernou can keep things close, then the Volunteers are in the hunt.

Stanford is benefiting from Felicia Lee’s versatility, and have her swimming the fly leg with Maya DiRado, a great 200 backstroker, leading off. There’s a chance that freshman breaststroker Sarah Haase could pop at this meet and put up a 58-low split there, too. Auburn again is a very good 400 medley, thanks to their breaststrokers and Olivia Scott: one of the favorites for the 100 fly National title. Texas gets much better with Sarah Denninghoff’s transfer and the emergence of Gretchen Jaques as a viable butterfly leg. They were 6th last year, and this relay should be half-a-second better than that one was.

Darkhorse: Missouri, 3:34.68: this Missouri relay dropped time at NCAA’s last year, and looked like they maybe weren’t fully tapered for their conference meet this year again. Graduating Shara Stafford hurts; it has to hurt. The other three legs, though, should all be faster than they were, and Dominique Bouchard can go a 51 to keep things tight with anyone (she only led off their 14th-place relay in 52.91 last year). They could go 52.0-1:00.0-51.8-48.3 on their splits. If that happened, they’d be around a time for a top 6 finish.

Weird that USC won’t use Tosky in the 400 Medley- I would imagine her on fly and shifting Stewart to back (where she’s more than competitive) would help them… Tosky has been quite fast in the short fly, so the dropoff wouldn’t be that great…

From what I understand, Tosky was really sick at PAC-12’s as well. She was great all Fall and I would expect her to shine, she is very race tested.