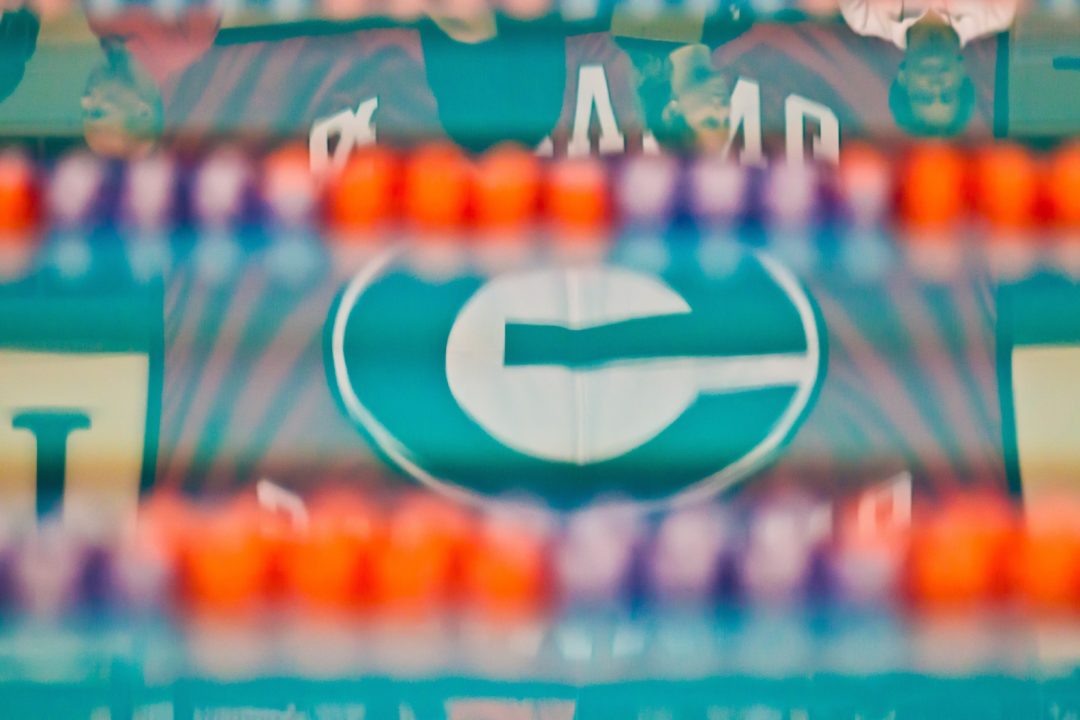 Something tells me I'm going to regret these picks. (Photo Courtesy: Tim Binning/TheSwimPictures.com)

Out of the 10 athletes joining the team, half are from the state of Georgia and two are from out of the country.

We’ve hashed, rehashed, and beaten-to-death the women’s NCAA Championship meet that begins on Thursday. At this point, it’s time to focus on the finer details. If you’re like us, your head is already spinning with information overload, and you’re ready for the meet to just begin, already.

We won’t go through too much more, but we’ll pick the top 25 for tomorrow’s meet, and give a quick key to each team’s success (with a bit more elaboration for what needs to go right for each of Cal and Georgia to win the meet).

We saw a lot that changed these lineups at the conference championship meets. To see our last set of Power Rankings, click here.

1. Georgia Bulldogs – The Bulldogs are seeded to score the most points based on psych sheets (about 30 more than Texas A&M). The key to victory for them will be a few things. The freestylers have to be as good as advertised. That means 4 up in the 200 free, 3 up in the 500 free, and their young sprinter Chantal van Landeghem has to be as good as she was at SEC’s (and then some). Two divers in is huge; Laura Ryan needs to score more than 20 points for them (she would have last season for Indiana before scratching the platform B-Final). Then in those off events, ones like the butterflies, where they’re not great, they need people to step up and get something. And finally, the 200 medley. It enters seeded 16th; Jack Bauerle needs to find a way to get that relay at least in the top 8. The Bulldogs have had a few negative things happen to them this season that keeps this from being a total lock, but as of now we’re leaning Georgia.

2. Cal Golden Bears – The Golden Bears are not as deep as they were last season, and their relays are not quite as good. They are certainly very young, and have some incredible talent. If they’re going to take the three-peat, they need a few things to happen. Cindy Tran needs to be on her game and as good as she was at NCAA’s last year. She’s the piece that those medley relays pivot around. Rachael Acker needs to be good every time she swims. For the free relays to work, and for Cal to not get totally annihalated by Georgia in the freestyle races, Acker needs to be mixing-it-up and scoring big points. The same goes for Catherine Breed, even though she’s fighting injury. She needs to find a way to score as much as possible in the 200 and 500 freestyles, and beat a Georgia swimmer or two. Caitlin Leverenz will be very good, of this we’re sure. But consistency is huge. At Pac-12’s, a few reported illnesses and what-not caused some specific swims to be far off of where they’ll need to be. The margin of error is small for the Golden Bears, so they need to be hitting everything.

3. Texas A&M – With Sarah Henry looking as good as she has, A&M has three swimmers who will medal in multiple events: Henry, Cammile Adams, and Breeja Larson. That’s 100 individual points right there. The Aggies may not score as big in diving as they have in the past, but should still squeeze out a few points. Like Cal, the freestylers are key here. It still may be a stretch to push A&M free relays into the A-Final, but their medleys are top-3 worthy. Then you add in swimmers like Caroline McElhany and Paige Miller who should have multiple swims in A-Finals, and you realize that this team is deeper than you thought it was. On their best day, with a Georgia and Cal stumble, A&M could take it all, but it would be a surprise a la when Florida did it in 2010.

4. USC Trojans – Backstrokers. USC backstrokers need to support the rest of their swimmers in the medleys, and Jasmine Tosky needs to find a way to be a jumping off point for the rest of this team, even as a freshman.

5. Arizona Wildcats – Lots of pieces have shifted around, but Arizona still has a very good team, anchored by Margo Geer, who could make history at this meet. Florida may outscore Arizona in swimming, but Arizona’s Sam Pickens is diving very well this year.

6. Florida Gators – Gregg Troy has turned his freshmen into major contributors immediately. Elizabeth Beisel will be better than at SEC’s, and Florida needs everyone else to try and match that. Ellese Zalewski is the key to their success in the relays.

7. Stanford Cardinal – Andi Murez keeps popping up in important places for Stanford. If their new coach Greg Meehan can have the kind of taper he used to have with the Cal men, then the Cardinal could be in the top 5.

8. Tennessee Volunteers – Kelsey Floyd needs to not only be one of the top three butterfliers in the country; she also needs to be one of the top-10 sprinters. Lindsay Gendron needs to avoid the big time adds she had at last year’s NCAA’s as well. Big diving points can come for the Volunteers.

9. Minnesota Golden Gophers – Minnesota has a lot of swimmers qualified for this meet. It only takes four for a relay, though, and the Gophers can be in the top 10 again if they can get their relays to the same lofty placings as they’re seeded. Big diving points here too.

10. Texas Longhorns – Ellen Lobb needs to shore-up the back-end of the Texas relays, much like Karlee Bispo used to do for them. The Texas divers looked great at Zones.

11. Auburn Tigers – Other than a few groups (like their breaststrokers, distance freestylers), the Tigers didn’t quite look right at SEC’s. Hopefully that means that Brett Hawke left something in the tank for NCAA’s. Their relays should be better than how they’re seeded.

12. Indiana Hoosiers – This team has a lot of swimmers with B-final potential that might not jump off the page, but eventually will add up to quite a few points. If they can get something out of their relays, even with limited sprinters, they’ll be good. Lindsay Vrooman has to be a star.

13. Virginia Cavaliers – Can’t get over-excited about their domination of an improving, but still fairly weak, ACC. Can get excited about how little rest Lauren Perdue seemed to have going into that meet. She alone should improve the Cavaliers 30+ ahead of their seeded 59 points.

14. Missouri Tigers – They should get just enough out of Dominique Bouchard and a few other B-Final scorers to stay in the hunt for the top 15. Their medleys will be good if they hit their taper. Loren Figueroa will be big diving points that the Tigers didn’t have when they placed 14th last year.

15. Virginia Tech Hokies – Virginia Tech’s swimming gets better-and-better each year, and senior butterflier Heather Savage is due for around 20 points in individual scoring. Qualifying three divers for the meet won’t hurt either.

16. Notre Dame Fighting Irish – Emma Reaney will carry this team to a top 20 finish, or leave them out of the top 20. She showed that she swims very well in finals, which will serve the team standing well in this tier where just a few points separate different spots. Getting a diver through in a tough Zone might turn into a few points.

17. North Carolina Tar Heels – UNC actually has some pretty good relays. If Carly Smith can get back to the scoring level that she was at individually before redshirting last season, then UNC could be in for a big weekend. Stephanie Peacock’s loss definitely hurts, but there’s still more substance to this team than that.

18. Penn State Nittany Lions – The Penn State relays will make up the bulk of their scoring, though swimmers like Merritt Krawczyk should supplement that a little bit with individual points. Medleys need to hit their potential.

19. Arizona State Sun Devils – Good free relays, along with a strong distance group headlined by Tristin Baxter. The Sun Devils have a potential to score a lot of points in their 800 free relays, with everything else just adding onto the pile. That includes a pair of diving qualifiers.

20. SMU Mustangs – There’s no reason for this SMU team to not be almost as good as they were last year, and they might even have a little more depth in their relays. It was tough not to put this team higher than 20th.

21. Ohio State Buckeyes – With such a strong senior class, it’s hard to see the Ohio State women getting blocked out of the top 25. Cheyenne Cousineau gives them some potential for good diving points as well.

22. Florida State Seminoles – Good sprinters, just some concern that they might not have a lot left to give after ACC’s. Not getting any divers in this year also hurts.

23. Louisville Cardinals – Kelsi Worrell was ridiculously good at Big Easts. She’ll need to be so again for the Cardinals to place as high as they’d like at this meet.

24. Yale Bulldogs – Two swimmers, and four individual events: Alex Forrester and Eva Fabian. Last year, it took 30 points to get into the top 20. Fabian isn’t seeded to score, so top 5 finishes from Forrester and even some low B-Finals in the distance races from Fabian would get the Bulldogs to 30 points.

Agree with the picks – although I think this meet may end up being as close as the 2001 and 2010 outcomes…mere points separating the top teams – with the 4×100 free relay determining the champion. Great preview. Thanks.

IMHO, Texas A&M to take it all!

Georgia will run away with this one.
Before CAL taking it back next year.