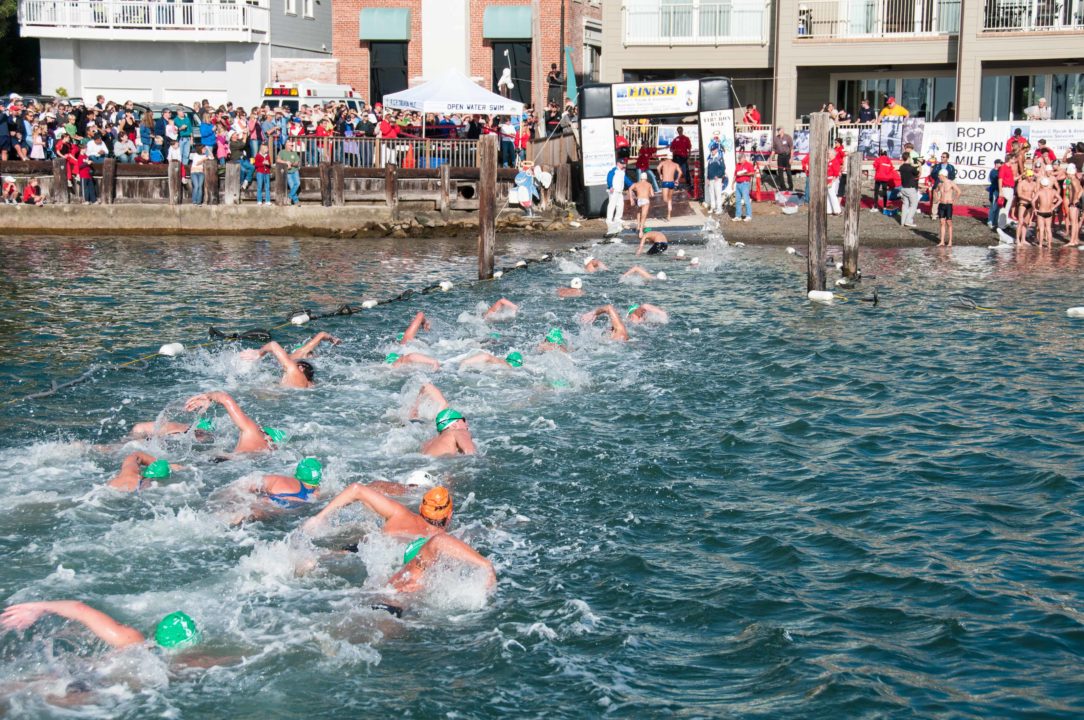 This weekend SwimSwam.com will bring you complete coverage of the Tiburon Mile in the beautiful San Francisco Bay.  I’ll be calling the race live with a scheduled start time of 9:00 AM Pacific Time.

So what do you watch for in this race?  First, there’s $10,000 USD on the line so it’s going to be very competitive – this will not be a lesierly late summer swim.   Most of the elite division will have scouted out the course the day prior to the swim to test the currents which are variable based upon the tides.  This is always an exciting tactical race and this year will be no exception.

Tune in beginning at 8:50 as I count down the start from the waters off Angel Island.

In the women’s 2012 RCP Tiburon Mile, old pros will return to defend their titles against the young upstarts.

Melissa Gorman-AUS: The 2009 and 2o11 RCP Tiburon Mile 1st place winner is back to defend her title and race again for the $10,000 prize. At the 2010 World Open Water Swimming Championships, Melissa captured the bronze medal in the 5K, but it was her 2009 World Swimming Championships performance that was, perhaps, her most memorable. Melissa stunned Larisa Ilchenko, the Olympic Champion, to win gold in the 5K.  Melissa, a two time open water Olympian, recently competed in the London Olympic 10K where she placed 11th.

Christine Jennings-USA: 2010 RCP Tiburon Mile Female 1st place winner Christine, 24, returns to Tiburon to claim another title. She won one of the eight 2012 FINA 10k World Cup races in. She placed 2nd in the 10K and 3rd in the 5K in the 2011 USA Swimming Open Water National Champs and won Gold in the 2010 Pan Pacific Champs. She won the 2009 and 2010 FINA 10KM Marathon Swimming World Cups in Lac St-Jean and the Pan Pacific Championship in the 10k Open Water Swim last year in Irvine, California.

Ashley Twichell-USA: Ashley, 23, a big star in open water swim news, joins us once again at the RCP Tiburon Mile. She is a world-class open water swimmer and a member of the USA National Open Water Swimming Team. Ashley won a gold and bronze medal at the 2011 World Swimming Championships in Shanghai China.  Ashley is the current 5K and 10K USA National Champion.

Beatrice Eisel-Germany: Is an rising star in German open water swimming.   She was recently the 4th overall woman finisher at the famed Waikiki Roughwater Swim.

Emily Brunemann-USA: Emily, 25, is a two time FINA World Cup 10K Open Water Champion, 1650 freestyle NCAA Champion , two time USA National Champion in the 1500 freestyle and 10K Open Water and current member of the USA National Swim Team. She represented the United States in Japan, Italy, China, Hong Kong, Argentina, Brazil and Grand Cayman, is a graduate of the University of Michigan with a bachelor’s degree in Psychology and currently a professional swimmer.

In the men’s RCP Tiburon Mile elite division it’s going to be crazy fast.  This field is loaded with talent, both veterans and newcomers will be gunning hard for the title.
Rhys Mainstone-AUS: Rhys, fresh off his 1st place finish at 2012  Waikiki Roughwater Swim, is in a great position to capture his first Tiburon Crown.  He’s experienced a lot of success over the last 24 months, winning the 2012 Oceania 5k and capturing the gold at the 2012 Australian Open Water Swimming Championships in the 10k. Rhys is a tough competitor and he’ll be tough to beat.
Codie Grimsey-AUS: In 2010 at the Australian National Open Water Championships, Codie Grimsey, 21, finished 4th in both the 5km and 10km events, gaining him a spot on the Australian team. He won gold in the 10km, silver in the 5km and bronze in the 1500m events at Oceania Championships. In 2011 he placed 1st in the Telstra 5k, the Beach Hotel Byron Bay 2.4k as well as 5K and 5th at the 2011 Australian National Champs. Codie will swim the RCP Tiburon Mile for his 2nd time.
Alexander Studzinski-GER: Alexander, 29, is from Magdeburg, Germany and is both a police officer and open water swimmer. He placed 1st in the FINA Grand-Prix Rosario 15km in 2009 and at the FINA Grand-Prix Capri-Napoli 36km in 2007. At the World Champions, Alexander placed 4th in the 25km in 2004.
Kane Radford-New Zealand: Kane has won this event twice and is the defending champion.   Although he qualified for a spot in the 2012 Olympic 10K field, the New Zealand federation exercised their prerogative to not fund his participation in the event because he did not place high enough at the Olympic qualifier last June in Portugal.   Although disappointed, Radford did not let this stop his swimming plans.  His next goal is the Commonwealth Games record in the 15o0 freestyle.  He is New Zealand’s national record holder in the 1500 (15:27.13).
Michael Klueh-USA: Michael, 25, is a nine-time All-American, three-time honorable mention All-American, Ten-time big 12 Champion and representative of Team USA at the 2007 World University Games where he claimed eight medals (4 gold, 2 silver, 2 bronze.) Michael  competed for the University of Texas from 2005-2009. Also the American record holder in the 800 free.
Eric Nilsson-USA: Eric from Massachusetts swam for Northwestern Univ. where he recorded the 2008-9 season’s best times in the 200, 500, 1000 Free and 200 Fly breaking school records becoming one of Northwestern’s most versatile swimmers. Eric placed 12th in the 2011 FINA Open Water Grande Prix in Canada and 12th in the 2011 USA Swimming National Champs 10K. In 2010 Eric won the Hawaiian Christmas Long Distance Invitational and was a member of the winning RCP Tiburon Miler Team at the 2011 Trans Tahoe Swim. This will be his 2nd year at the RCP Tiburon Mile.
Michael Sheil-AUS: Michael, 23, joins us for his 2nd RCP Tiburon Mile event. He recently participated on the 1st place RCP Tiburon Milers Trans Tahoe relay team and came in first place at the Escape from Alcatraz, 2011.
David Heron-USA:  Is the defending USA National 5K Champion.   He won the Jr. Pan Pacific 10K event.  The 17 year old from the Mission Viejo Nadadores posted a 15:28.50 in the 1500 at this year’s Olympic trials.
Aimeson King- Canada: Is a member of the Canadian open water national team.   He competed in the 10K at the 2011 World Championships and the FINA Marathon Swimming Grand Prix.  He swims for Island Swimming in British Columbia.

Gerardin Burns-USA:  Burns trains with Coach Bill Rose in Mission Viejo and won the bronze at the 2012 Jr. Pan Pacs in the 1500 free.  He was a double gold medalist at the 2012 Jr. Nationals winning the 400 and 800 freestyle events.

Ridge Grimsey-AUS: Ridge, 18, of Australia is the youngest of the  Grimsey brothers—all of which are open water swimmers. He was on the winning team at the 2012 Trans Tahoe Relay and joins us at the RCP Tiburon Mile for the first time.

Vincent Donelly-USA: Vinny is from Florida and swam at Purdue Univ. where he broke several records his freshman yr. competing in distance freestyle events. Vinny finished 9th in the USA Swimming Open Water 10K this June and will compete for the 3rd time in the RCP Tiburon Mile.

Charles Cunnick-USA: Charles, 26, is from Davenport, Iowa took to Northwestern University for swimming where he was the team captain in 2008.

Mike Lewis has nearly three decades of open water swimming experience as both an athlete and coach.   He has worked with a wide range of athletes including Olympians and World Record Holders. Mike was as an administrator in the U.S. Olympic movement for 10 years and was a team director for the 2000 Olympic games.   Mike himself is an avid swimmer and has notched several top 10 rankings in US Masters swimming.