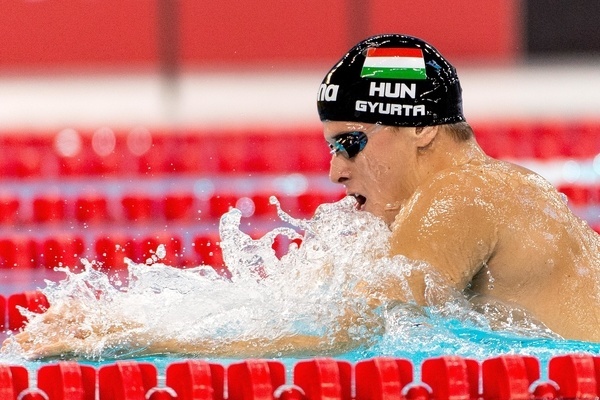 After 100 free defending Olympic champion Nathan Adrian narrowly escaped a huge upset squeaking into the semi-finals in 16th place earlier in the session, 2012 200 breast gold medallist Daniel Gyurta wasn’t so lucky. Gyurta struggled in his heat, finishing 6th and ultimately placed 17th in 2:11.28. He missed qualifying for the semi-finals by just two one-hundredths of a second.

Gyurta’s resume in the 200 breast goes far beyond his 2012 Olympic gold. He won the Olympic silver medal in 2004 at just 15 years of age, and continued success throughout his career with three consecutive World Championship titles from 2009 to 2013. He has also won two short course World titles in the event, two long course European titles, and five short course European titles.

Gyurta also briefly held the world record in this event after his Olympic win, only to have Japan’s Akihiro Yamaguchi take it away one month later.

After winning his 2012 Olympic medal, Gyurta presented a replica medal to the family of the late Alexander Dale Oen, who tragically died at age 26 prior to the London Games. He was the 2011 World Champion in the 100 breaststroke.

After tying for 16th in the 100 breast, Gyurta scratched the swim-off, clearly putting all his focus on the 200 breast. It just didn’t pan out for him today. We may have seen the last of one of the greatest 200 breaststrokers in history.

This year has truly heralded “the changing of the guard” in regards to many veteran champion swimmers around the world. Adrian just avoided joining that club. “Squeaking by” is right.

Any of these big drop off in performance would draw suspicion.

We wont see the last of him. People seem to forget world champs is in Hungary next year