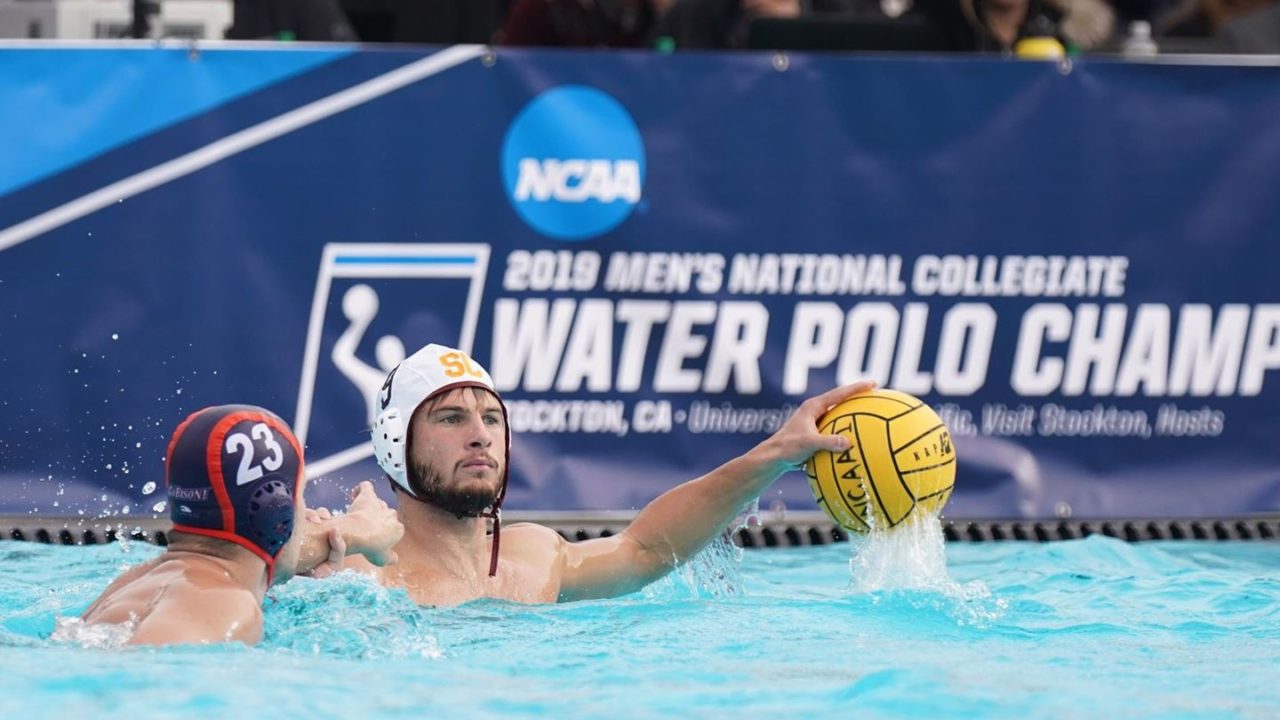 The SCIAC Presidents have unanimously agreed to cancel conference competition at least for NCAA categorized high-contact risk sports in the fall semester.

#2 USC and #4 Pepperdine punched their tickets to the NCAA Men’s Water Polo Championships semifinals with victories in Stockton, California, on Thursday.

The winners of the semifinal matches will meet for the NCAA title at 6 p.m. Sunday.

USC earned a spot in the NCAA Semifinals with a 15-9 win over Bucknell on Thursday. The Trojans will face #1 Stanford in a rematch of the 2018 championship match, which USC won 14-12.

Nic Porter made nine saves over the first three periods for the Trojans, while Vaios Vlahotasios wrapped up the game with three stops in the fourth period. Adrien Touzot made six saves for Bucknell.

USC surged into the lead with four goals in the second quarter, while keeping the Bison off the scoreboard in the stanza. A penalty shot by Mercep knotted the score at 3-all just 23 seconds into the period. Slobodien followed less than a minute later (6:43), putting USC in the lead for good (4-3). A powerplay goal by Hannes Daube (1:43) and a score by Marin Dasic (0:45) gave the Trojans a commanding 6-3 advantage at halftime.

The back and forth battle continued with a Cullen Jacuzzi penalty (4:31) and another Joksimovic score (3:03) to pull Bucknell back within five (13-8). With two minutes left, USC poured in two more goals to put the game out of reach: Corey Allen (1:54) and James Kolenda (1:10).

Bucknell ended the game and its season with one final score with one second remaining in regulation care of Niki De La Sierra.

A five-goal second quarter helped Pepperdine break away en route to an 8-5 halftime lead and a 15-12 victory over UC Davis in the second NCAA quarterfinal on Thursday.

Seven players found the back of the net for the Waves, including a six-goal effort by Chris Dilworth and a four-goal outing by Balazs Kosa. Nir Gross put in four goals and Holden Tamblyn added a hat trick to lead five Aggie scorers.

In the net, John Claude Maro made eight saves for Pepperdine, while Jonah Addington notched seven stops for UC Davis.

Pepperdine scored first as Dilworth notched a goal just 25 seconds into the game (7:35). UC Davis answered with two goals: Tamblyn (6:59) and Gross (5:18). The Waves registered two scores in the final two minutes of the opening stanza to surge ahead 3-2. Kaden Kaneko (1:57) and Kosa (1:05) put Pepperdine on top.

UC Davis was within two less than a minute into the third quarter thanks to a Gross goal (7:09). Kosa scored on a powerplay (6:20) only to see Tamblyn respond 11 seconds later (6:09) and Eric Martel make it a one score affair at the 5:16 mark.

It was all Pepperdine from there as Dilworth (4:11, 0:18) and Sean Ferrari (powerplay 2:00) put the icing on the victory. UC Davis hit the post as the game came to a close.

The victory puts Pepperdine into the NCAA semifinals for the first time since winning the NCAA title in 1997 and the ninth time overall.