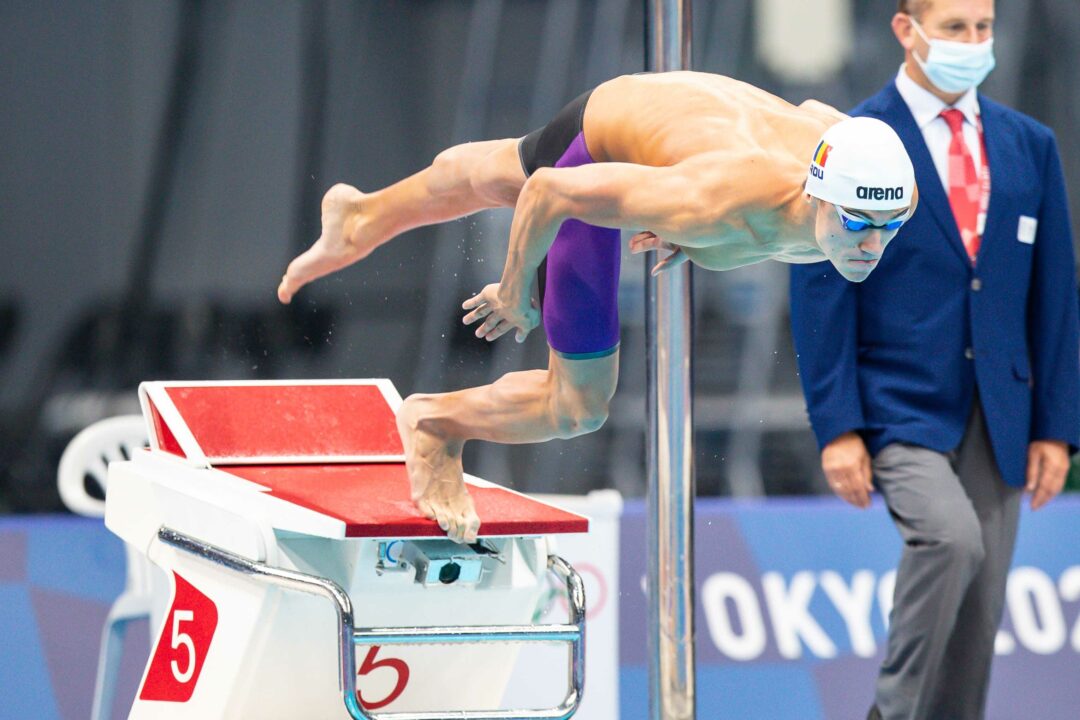 While Australian ace Kyle Chalmers was blowing away the men’s short course meters 100 freestyle World Record with his mighty 44.84 performance, another record was broken further down the line.

Posting a time of 46.77, 17-year-old Popovici placed 5th in the race, getting under the 47-second threshold for the first time in his young career.

Popovici busted out a PB already this morning, punching a swim of 47.62 to make it into the final in 7th place. That already took over the previous Romanian standard of 47.70 Marius Radu put on the books at the 2015 European Short Course Championships.

Flash forward to tonight’s race and Popovici opened in 22.73 and brought it home in a blistering 24.04. Only WR-setting Chalmers was faster on the back half with the Aussie posting 23.44 in a league of his own. As such, Popovici’s time tonight hacked nearly another second off his time and he is now entering World Junior Record territory.

The WJR stands at the 46.11 Kliment Kolesnikov registered in 2018 with plenty of time left as Popovici just turned 17 in September.

Not bad.
2 Seconds off chalmers

Does this make him the 2nd fastest European Junior of all time?

He will do it. Just give him some time.

I honestly thought it was long course at first.

SC is like kryptonite for Popovici: his start and turns are really subpars and he cannot display his fantastic swimming phase because there is immediately another turn.. ; so this debut is a very good one. I watched Popovici’s race in lane 1 with the left eye and Chalmers’ race in lane four with the right eye and it’s incredible how Popovici was light on the water vs opponents with so much more power than him. Interesting to watch his result in the 200 free tomorrow and his 400 free next week at Euro Champs, but no doubt that chlorinedaddy in LCM, pretty distant from his kryptonite, will return Superman..

Well he’s only just turned 17. I’m sure if you put him up with the best 17 year olds, he’d crush them off the walls.

He’s just 17, right, and obviously there’s room for improvements but, considering start and turns, there have been 17 year-old way better than Popovici. For instance Thomas Ceccon, without citing the Usa specialists, like Hoffer and Dressel.

I want ur eyes