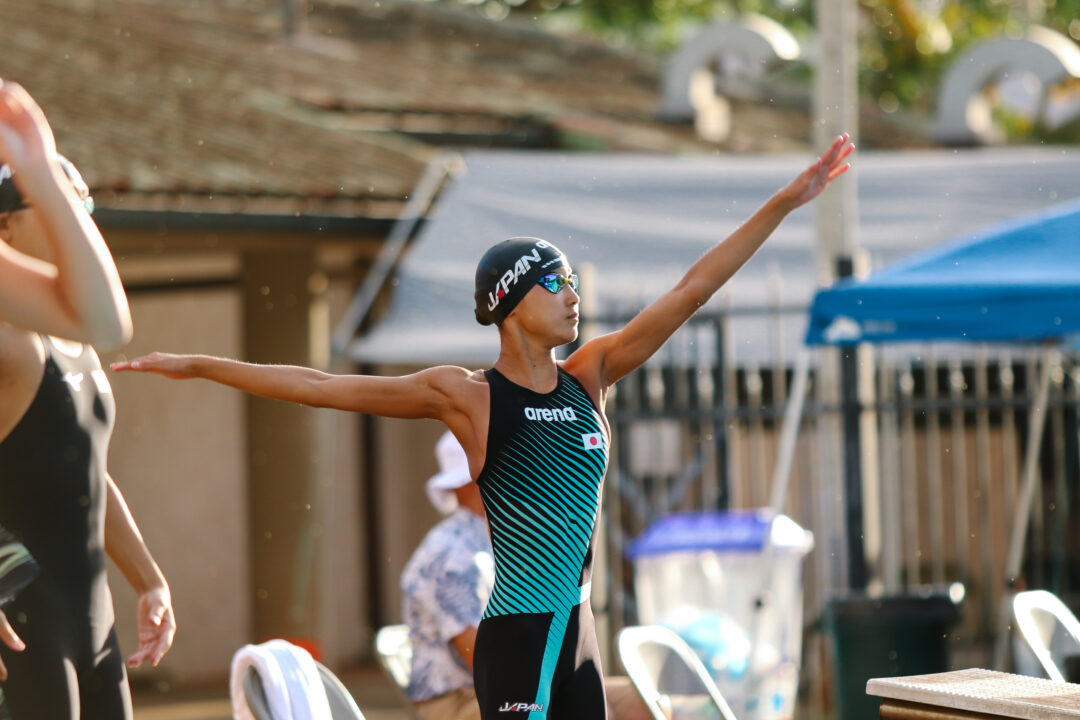 15-year-old Mio Narita put up a 400m IM time that would have place 4th at the 2022 FINA World Championships in Budapest. Archive photo via Jon Reiter

Day two of the 2022 Japan Open was a little on the subdued side, but solid swims were still the order of the day at the Tokyo Tatsumi International Swimming Centre.

Following up on his 100m freestyle victory from day one, Katsuhiro Matsumoto claimed the 200m free title today. 25-year-old Matsumoto topped the podium in a time of 1:46.44, putting up the only sub-1:47 swim of the night.

Matsumoto is the national record holder with his personal best of 1:44.65 he established in April of 2021. This past October at the Japan Short Course Championships, Matsumoto also registered the short course record in a new PB of 1:41.67.

Behind Matsumoto this evening was Tomoru Honda, the reigning 200m fly Olympic silver medalist. Honda snagged silver in 1:47.43 to produce a new personal best. Entering this meet, Honda’s career-quickest rested at the 1:48.03 he logged at the Japan National Championships this past April.

15-year-old Mio Narita was also in the water for day two, taking on the women’s 400m IM. The teen raced her way to a mark of 4:37.32 as the only swimmer to delve under the 4:40 barrier. Of note, national record holder and two-time Olympic gold medalist Yui Ohashi was not in the race.

Narita’s outing here was within striking distance of her own personal best, a time of 4:36.71 from the World Championships Trials this past March. That briefly stood as the World Junior Record until Canada’s Summer McIntosh dropped it down massively to a time of 4:29.01.

Narita has already had a successful 2022, having taken the 200m IM and 400m IM gold medals at the World Junior Championships. She also claimed both titles at this year’s Junior Pan Pacific Championships, while adding the 200m back silver to her impressive junior swimming resume.

Rio Shirai was within a second of her own personal best en route to claiming gold in the women’s 200m free. She logged 1:57.85, while her PB stands at the 1:56.82 she produced 3 years ago. That 2019 effort rendered Shirai as the 2nd fastest Japanese performer ever, sitting only behind Rikako Ikee‘s 1:54.85.

As a reminder, Ikee is taking the rest of this year off of competitive racing. She says she wants to focus on the 2023 World Championships and the Paris 2024 Olympic Games.