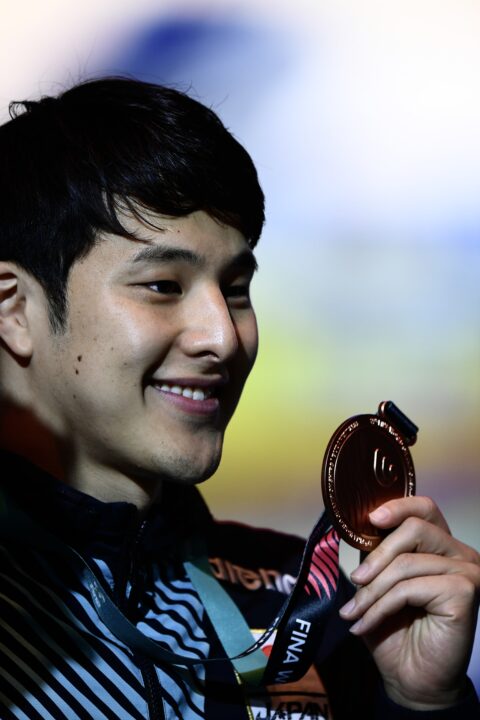 Honda unleashed an opening 100m of 54.76 to lead Seto by over a second after the fly leg. Seto continued to trail until breaststroke where the versatile ace outsplit Honda 1:09.41 to 1:11.59. Seto held on to the end and snagged gold by just under a second.

This is Seto’s 2nd consecutive national title in this men’s 400m IM, as he also topped the podium at the Japanese Short Course Championships this past October in a time of 4:00.70. Honda did not race the event at that competition.

Seto and Honda now easily check in as the top 2 long course swimmers in the world rankings on the season.

Of note, Seto has won the men’s 400m IM event at the past five editions of the FINA Short Course World Championships, meaning he’ll be gunning for title #6 in Melbourne this month.

Also making some noise tonight was Takeshi Kawamoto. Taking on the men’s 50m butterfly, 27-year-old Kawamoto clocked a time of 23.26. That result sits just .09 outside of his own national record of 23.17, a time he produced in April of 2021.

Katsuhiro Matsumoto was in the water as well, earning gold in the men’s 100m freestyle. Matsumoto posted the only sub-49 second time of the field, winning the event in 48.77. That held a healthy advantage over runner-up and national record holder Katsumi Nakamura, with Nakamura securing silver in 49.30.

Reona Aoki made it happen in the women’s 100m breast, winning the top prize in a time of 1:06.11. Although that’s well off her own personal best of 1:05.19 from this past spring,  it was enough to beat tonight’s field by nearly one second.

Great to see ogata finally get a second pb. That kid won the 400 IM at the Japanese highschool championships as a first year in 4:13

Imagine if Setos wins the 400IM in Paris

For him that would be one of the greatest comebacks of a 4 IMer because he would likely have to break the WR to win as well as be one of the biggest upsets of the entire Olympics.

Beyond Seto and Honda, usual depth at a very high level from Japanese Imers. Also some young Australian swimmers racing, and 19 year.old Kai Taylor won the 100 free B-final in a good 49.48.

true true. i ain’t a mathematician, that’s for sure

is this short or long- course? the Argentinian times are all SCM…

4:10 would be quite slow, scm, for this caliber of swimmer.

Playing to his strengths