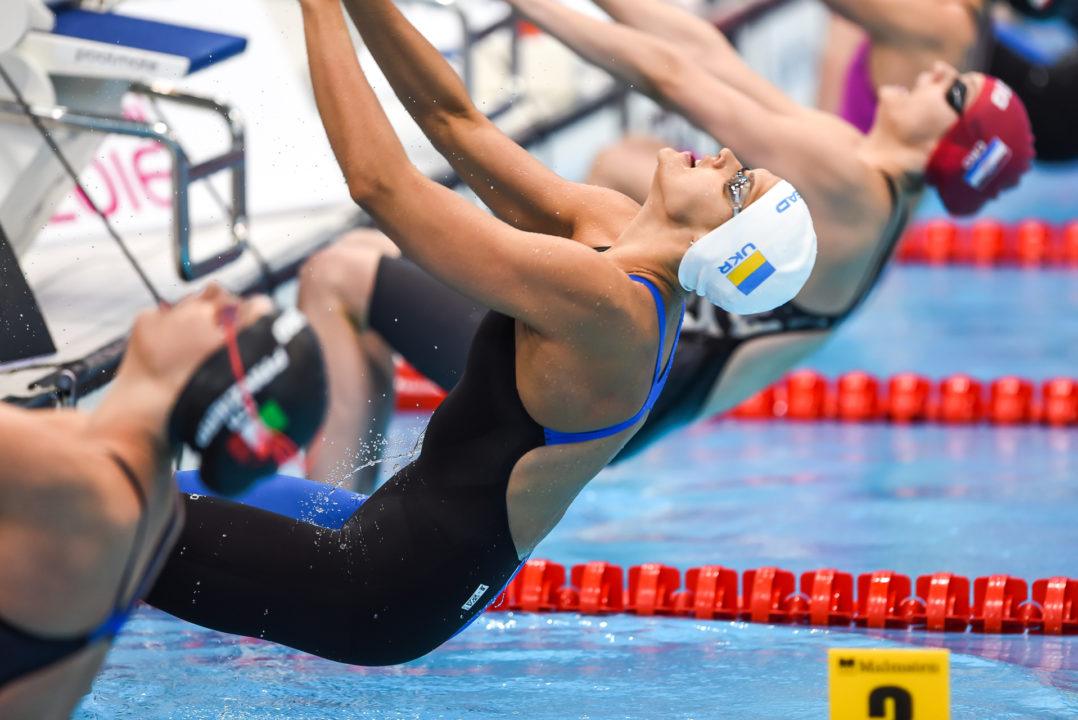 Ukrainian swimmer Daryna Zevina (above) is one of 12 swimmers who have arrived in a training camp in Lignano, Italy amid ongoing war in their home country. Archive photo via Peter Sukenik/www.petersukenik.com

Italy, already playing host to some of Ukraine’s Olympians in artistic swimming (synchronized swimming), will now also host a selection of Ukraine’s elite swimmers as well.

From March 12-31, a group of 12 swimmers and 4 coaches will be hosted by the Italian Swimming Federation (FIN) in Lignano Sabbiadoro for a training camp.

Athletes in Ukraine have been unable to train since February 23, the day before the Russian invasion of the country began. Images circulated on social media claim that the Ukrainian Olympic Pool in Kharkive was damaged by a missile. SwimSwam could not independently verify those claims.

“After the synchro team, swimming also has chosen our country to resume sporting activity away from war,” FIN president Paolo Barelli said. “When we received the request for help from the swimming federation, we immediately took action to identify the most appropriate solutions to their needs. The athletes should cross the Hungarian border today and there they will find our transport ready to continue the trip up to Lignano.

“Our hope is that these gestures of solidarity will be an example for anyone who has the opportunity to intervene to help the Ukrainian people dramatically affected by the war.”

Among the swimmers in attendance include Tokyo 2020 Olympians Vladyslav Bukhov, Denys Kesil, Serhiy Shevstov, and Daryna Zevina. All four of those swimmers have international medals, most notably the 27-year old Zevina who was the 2012 World Champion in the 200 SCM backstroke and is a six-time European Champion, a Youth Olympic Champion, and a World Junior Champion as well.

While Ukraine is requiring most male citizens between the ages of 18 and 60 from leaving, it appears as though these athletes have been granted some exemption. Kesil represented Ukraine at the 2019 World Military Games, where he won a silver medal in the 200 fly.

SwimSwam has spoken with Shevstov, who was living with his wife in the capital of Kyiv, several times since the Russian invasion began. His most recent message on Tuesday says that he is fine, but that he and his wife were staying in their car at night.

“We have some problems,” Shevstov said wryly.

Hungary has also come forward to give shelter to 23 national age-group swimmers from Ukraine after 5 days of travel. They will be housed in Debrecen and Kaposvar.

FINA remains one of the few sporting organizations that still plans to host an international sporting event in Russia this year – the 2022 World Short Course Championships in December. With some organizations, like British Swimming, pulling out of other meets because of the presence of Russian and Belarusian athletes, its unlikely that a World Championship event in Russia will be well-attended.

Saturday has seen Russian forces come closer to the Ukrainian capital with explosions heard around the city. A number of other cities are under increasing pressure from the Russian military, which has taken over several nuclear power plants in Ukraine.

A few glimmers of hope have come late this week, as Russia has resumed talking to international leaders, including those from France and Germany. Russian state-run media reported on Saturday that the country was ready to resume security conversations with the United States.

UKRAINIAN ATHLETES IN CAMP IN LIGNANO

how can any country bring their athletes to Russia?Not only dangerous but morally unacceptable.

I understand the basic human instinct to escape this dread any possible ways. We ourselves are trying to help our dear friends to leave Ukraine since their son is almost 18 and they are afraid that he will never see his 19th birthday. And the only obstacle right now is this boy who firmly believes that leaving the country at this moment is an act of treason. He belongs to the most difficult category of people to deal with, who do not understand any reasoning – young patriots. That to die young under Russian tanks without accomplishing anything useful to his country may not the best way to proceed.
And now I’m reading about these swimmers with their coaches… Read more »

The nuke plant at Zhaporozhe sealed the deal .

Speaking of power , much of Europe will be struggling to heat pools incl Italy .

I agree with you & think this is the end of an era .