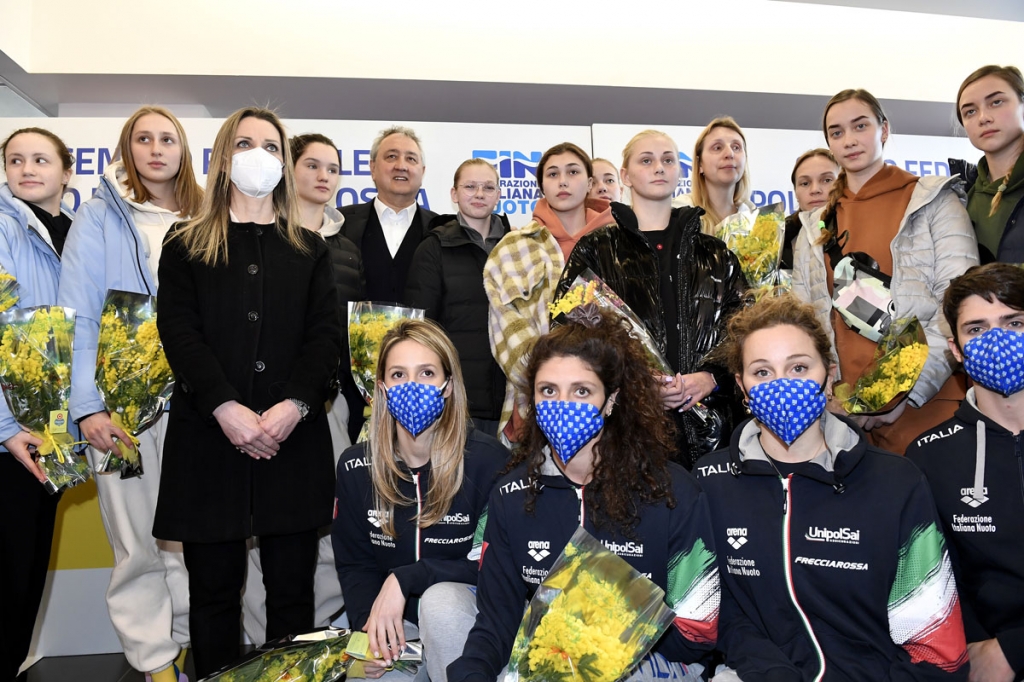 Members of the Ukraine National Artistic Swimming Team will live and train at the Federal Training Center in Ostia, Rome after Russia invaded their country. Current photo via Andrea Staccioli Deepbluemedia Inside

Ukraine’s national artistic swimming (synchronized swimming) team arrived at the Polo Acquatico Frecciarossa in Ostia, Italy on Tuesday. There, they were welcomed by the president of the Italian federation (federnuoto) Paolo Barelli, along with a delegation of both athletes and local political and sports officials.

The team made the 3000 kilometer (1900 mile) journey from Ukraine to train in Italy after being displaced by the ongoing war in their home country.

Ukraine is one of the most successful countries in the world in artistic swimming. At the Tokyo 2020 Olympic Games, they won bronze in both the duet and team events, the two events in the Olympic program. At the 2019 World Championships, Ukraine ranked 2nd in both gold medals (1) and total medals (6) behind only the dominant Russians.

Ukraine’s win in the Highlight Routine event was the only gold medal that Russia didn’t win. Russia didn’t participate in that event, which is a relatively new one on the artistic swimming schedule.

Video of the team’s arrival:

The trip saw the team first gather in Lviv, a major city in the western part of Ukraine that so far has escaped the worst of the fighting, but is expecting more in coming days. They arrived first in Budapest, Hungary, and from there left for Rome in busses chartered by the Italian Swimming Federation.

“There is growing concern. The athletes we await at the border are divided into three groups,” Barelli said of the plans. “Not all of them managed to reach Lviv which was the meeting point identified by the Ukrainian federation. Let’s hope they all make it to the border. However, we are ready to organize even more trips if necessary to ensure their transport to Italy. Sport must be close to the tragedy that our Ukrainian friends are experiencing, condemn with drastic decisions and stigmatize Russia’s actions with an attitude of firm denial; it must be a deterrent and a spur to quickly reach peace. Our availability is little compared to the sacrifices and difficulties that the Ukrainian people are facing. Many athletes are fighting for freedom. We hope to see them in the pool soon.”

The federal center in Ostia is designed to host athletes, including lodging on-site, both 25 and 50 meter pools, and a dining hall. Athletes are expected to live and train at the center.

The center is where Gregorio Paltrinieri trained for years, as well as Mykhalo Romanchuk, a Ukrainian swimmer who has Olympic medals.

While some of the country’s top aquatic athletes train outside of Ukraine, others have chosen to stay in the country to fight the invading Russians, or have been required to remain in the country because they are males of a fighting age. A National Team coach, Aiyna Morozova, was trapped for 2 hours in the rubble under a building that was hit by a missile in Kharkiv last week.

It’s so important that we do what we can now and at the very least our national aquatics federations should give training opportunities and support to the displaced Ukranian aquatic athletes. I know diver Oleksiy Sereda is here in Vienna right now, staying with Austrian diver Anton Knoll and his family. The Austrian Swimming Federation, for once not being total dbags about athlete support, are contributing by making training facilities available. Sereda’s father stayed back in Ukraine to fight, his mother and sister are in Bratislava, staying with a friend.