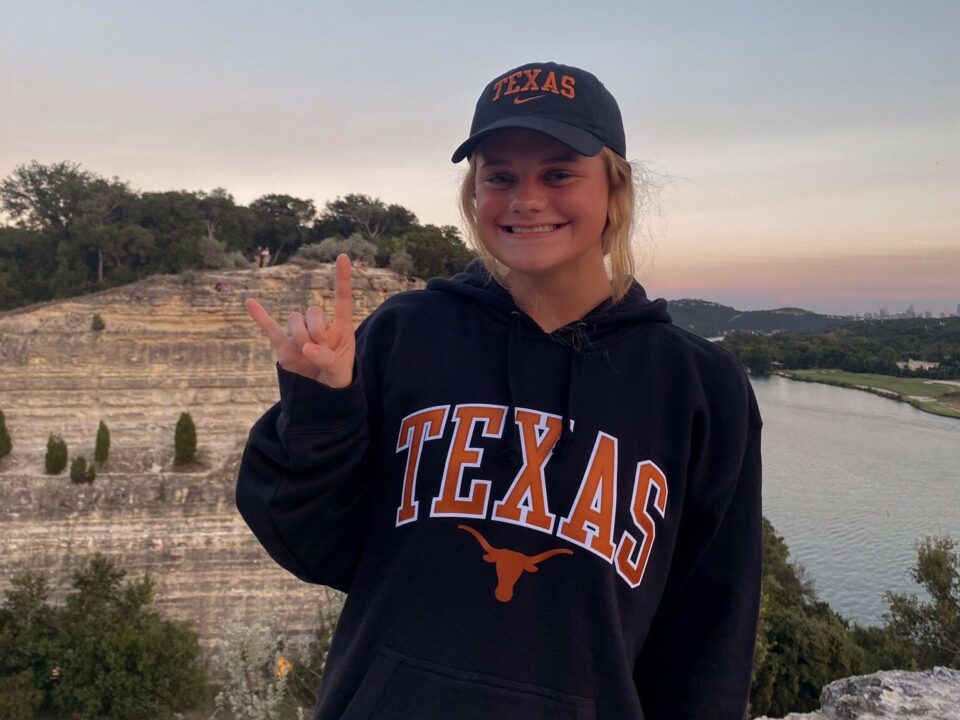 Carmel, Indiana’s Berit Berglund, the #12 recruit on our Way Too Early list of top-20 girls from the high school class of 2023, has announced her verbal commitment to the University of Texas for the class of 2027.

“I am thrilled to announce my verbal commitment to swim and study at the University of Texas! A huge thank you to my family, friends, and coaches who have supported me throughout this process and my entire swimming career! HOOK ‘EM HORNS🤘🏽🤠🧡🐂 #hookem”

Berglund is a junior at Carmel High School and swims year-round for Chris Plumb at Carmel Swim Club. She is just the latest in a long line of Carmel-to-Austin swimmers that has included, most recently, names like Claire Adams, Andrew Couchon, Drew Kibler, and Kelly Pash.

Berglund is the top 100-backstroker in the class of 2023 and her 52.0 would have scored at 2021 NCAA Division I Championships. She improved her time by 1.4 seconds in the 100 back and almost 2 seconds in the 200 back last year. She also dropped over a second in her 100 free. In July, USA Swimming named her to the National Junior Team that will represent the U.S. at the third and fourth legs of the 2021 FINA Swimming World Cup this fall.

Berglund would have ranked third on the Longhorns’ depth chart in the 100 back last year after Olivia Bray (51.04) and Julia Cook (51.14). Cook is a senior this year but Berglund will overlap one year with Bray.

It’s too bad we can’t just congratulate kids when they realize one of their dreams and commit to swim in college. Program bashing solves nothing in these articles. Let the kids have their moment.

Couldn’t agree more! Kids work so hard and coaches too! Thank you.

Yeah lets take away free speech. You are asking people to think before they type its not gonna happen.

And then there’s this guy.

Texas women about to be goated

Texas is a great school, Austin is a great city, Carol is awesome. Congratulations!

I hope she develops more than Bray has

Sadly the Texas women’s team doesn’t have the best track record for development, wishing her the best though

Hope Jacoby develops when she arrives!! Still wondering why she chose Texas? (Just being curious)

she is sitting right by me. She likes it.

Did Bray not finish 2nd at NCAAs in the 2 fly? She’s only had a season at Texas, give her a break

In her freshman year Bray set PBs in 2Fly, 1Back, and 50Free, and she was less than 0.2s from her then-record 1Fly