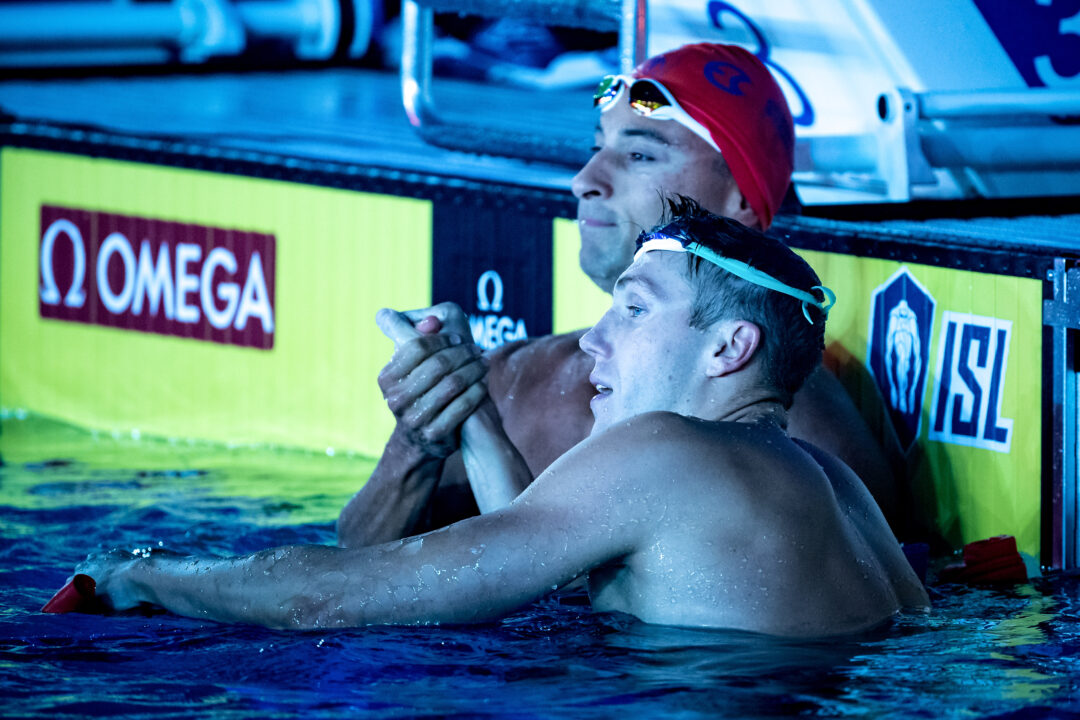 Match 9 of the International Swimming League (ISL) regular season is essentially meaningless in the grand scheme of things, with three of the club’s competing locked into a spot in the November postseason and the DC Trident guaranteed to be heading to next week’s play-in match.

This resulted in DC Trident general manager Kaitlin Sandeno saying that her club would be trying “some new things” in the match as they prepare for the wildcard-type showdown next week, and it seemed to work to an extent, as the club holds down third place through Day 1, 8.5 points up on the Toronto Titans.

DC only registered one win during Day 1, with Andreas Vazaios claiming the men’s 200 IM, but they had a very strong relay performance, relatively speaking, as they outscored the Titans by 18 points across the four team events. Toronto was largely the victim of some major relay jackpots by Energy Standard and the London Roar.

Energy Standard had a very strong opening day and appear well on their way to finishing the regular season a perfect 4-0.

Much of this was due to the club’s individual performers, which included winning six consecutive events (five individual) early in the match after Toronto won the first three. But an even bigger reason why Energy Standard leads London by 73.5 points heading into Day 2 is from the relays.

Energy Standard scored 106 relay points compared to London’s 74, including a massive 38-point jackpot in the women’s 4×100 free. The Roar bounced back with a pair of relay wins of their own, but Energy Standard finished the session off with another 24-point jackpot in the men’s 4×100 medley, scoring a cumulative 30 points to London’s 14 in the event to further extend their lead and gain even more momentum heading to Day 2.

DC scored 62 relay points, while Toronto only managed 46, with their ‘B’ teams combining for -4 points.

As was the case last weekend, the London Roar continue to have an Adam Peaty-sized hole in their men’s breaststroke corps.

Thanks in part to a 19-point jackpot from Ilya Shymanovich in the men’s 50 breast, Energy Standard scored a total of 38 points across the two male breaststroke events on Day 1 compared to London’s five.

The Roar were jackpotted in three of their four men’s breast entries, with only Ross Murdoch getting on the board with a fourth-place finish in the 200 breast.

Then, in the men’s 4×100 medley relay, London’s ‘A’ team out-split Energy Standard’s by a combined 1.72 seconds on back, fly and free, but Shymanovich (55.36) out-splitting Murdoch (57.63) by over two seconds on breast resulted in Energy winning the relay and outscoring the Roar by 10 points.

It’s possible that with Peaty, and maybe even Kirill Prigoda, back in the fold for London, they could compete with Energy Standard, but right now the men’s breaststroke hole is killing them.

Controversial suggestion: In relays, if the winning team’s second relay gets jackpotted by their winning relay, all jackpots are cancelled for that event.

This way, teams would be required to make balanced relay teams, because if their A team is too much better than their B team it would cost them their jackpots.

This happens so often that it would basically prevent jackpots in the majority of relays altogether.

How about only getting jackpots for teams that score below your B team?

I see your point but this would not make sense for the league. They don’t care about having 1 good and one bad relay, fast swimming matters more than being balanced in scoring as well as when it comes to tv ratings.

There’s always gonna be jackpots in the freestyle relays since they decreased the jackpot times this season because teams simply can’t field two fast teams.

Yeah. The freestyle relays have been destroyed as a strategy play this season. Gone are the days where you might go for a 3-5 over a 2-7. First team only one that counts and can’t see that changing in the free relays

Praying to Poseidon for a 3rd place DC finish