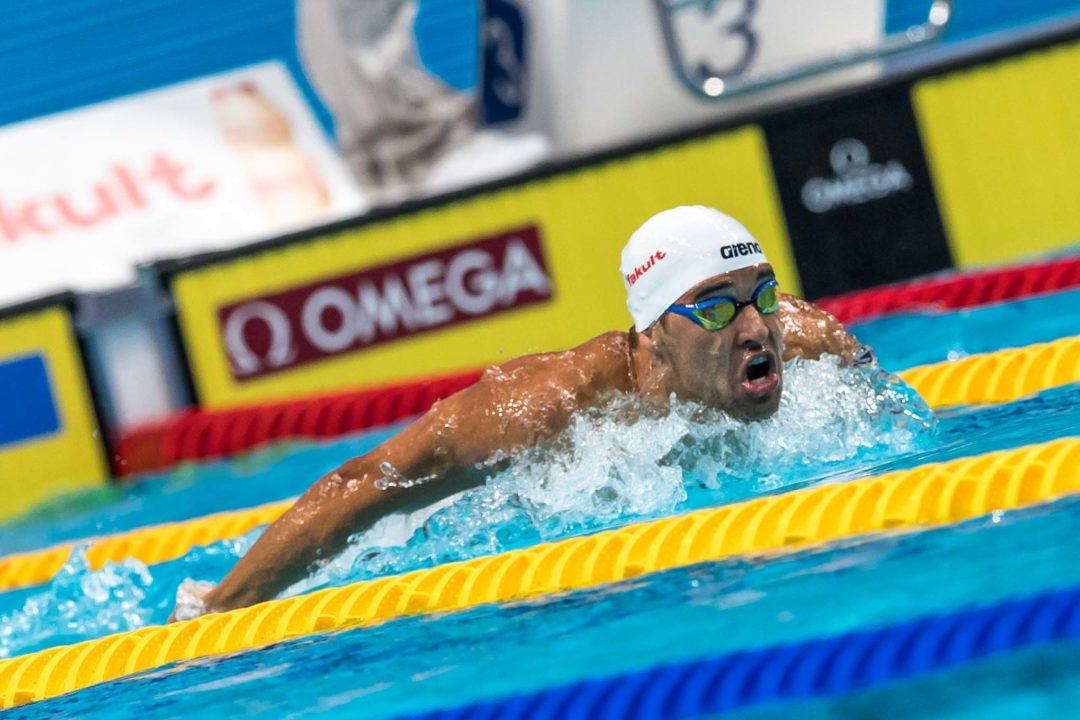 Olympian Chad Le Clos is among the 11 South African swimmers who made their nation's Short Course World Championships squad; but, there's a catch. Archive photo via Mike Lewis/Ola Vista Photography

On the final day of the 2018 South African Short Course Championships, Durban saw more promising performances from its key players in the form of notching qualifying times for this December’s Short course World Championships.

Olympic medalist Cameron van der Burgh stepped up once again and won the men’s 50m breaststroke in a time of 26.47, well under the selection cut of 26.77. He already qualified in the 100m breast earlier in the meet, giving VDB a berth at his 5th Short Course Worlds appearance. Teammate Brad Tandy also scored a qualifying time in the 50m breast event, clocking 26.66 to go along with his 50m fly cut from earlier.

Tandy also did some damage in the men’s 50m freestyle event on the final night of the meet, winning in a quick 21.43 to notch another qualifying event. Finishing behind him was Zane Waddell, who nabbed his 3rd qualifying time with a runner-up mark of 21.65. Waddell has already qualified in the 50m back and 100m free.

Commonwealth Games gold medalist Tatjana Schoenmaker completed her sweep of the breaststroke events, one that included a new national record in the 100m event yesterday. Tonight she took gold in the 50m in 30.39 to represent the only swimmer of the field to venture under 31 seconds. Her 50m performance also ranks as the fastest swim ever by a South African woman in the event.

200m breaststroke qualifier for the men, Ayrton Sweeney, earned a 2nd event appearance with his 400m IM victory in Durban. His winning time of 4:09.60 was well under the 4:10.27 consideration time.

Commonwealth Games bronze medalist Ryan Coetzee added another event to his Short Course Worlds line-up by winning the men’s 100m fly. With Chad Le Clos already having qualified earlier in the meet and scratching the race, Coetzee nailed a winning time of 51.76. However, his morning effort of 50.97 is the mark that cleared the 51.56 QT to give him the event nod. He had already qualified in the 50m fly as well.

Erin Gallagher nabbed her 4th qualifying time to wrap up an impressive performance, winning the women’s 50m freestyle in 24.46. That registers as a new South African national record, adding to the 100m free NR she set earlier this meet.

As the meet concluded, below is a list of the South African swimmers who earned Short Course World Championships qualifying times. However, with the official selection procedures making it clear that appearing in China is ‘a self-funded tour’, it’s doubtful all those listed below will indeed wind up competing.

I’ve read somewhere that Danish swimmers also won’t be going to the SC Worlds because there’s no money for it.

There is funding for swimming in RSA, unfortunately it is used to line the pockets of the high ranking officials. Flying 1st class, huge per diem, and luxury hotels, while their swimmers fight to pay their own way. In the USA, some of the behavior would be criminal. In RSA, it is the norm.

What’s frustrating for them is that because there is no funding and support for swimming in South Africa in general, it encourages pontential swimmers who have talent to pursue other sports. This should shed light on the fact that those South African swimmers who do become Olympic Medalists are examples of athletes who are defying the odds and overcoming adversity. This applies to other nations as well who are also not fortunate to have budgets that cultivate success and high performance environments like the U.S. If you think people should pursue sport for just the love of it, then you shouldn’t watch the NFL, NBA ect

With the success of Le Clos and Van De Burgh in recent years, its bizzare that there’s no funding poured into south african swimming.

They have the potential for a GREAT Mens 200m Medley relay.

“Self-funded”? That is really disgusting of Swimming South Africa. The level of mismanagement is criminal, and it’s been like that for years.

They should set up a go fund me page. I think a lot of people would donate!

At this point, South Africa should just fire 90% of their staff and give it to their athletes for major international competition. Pathetic.