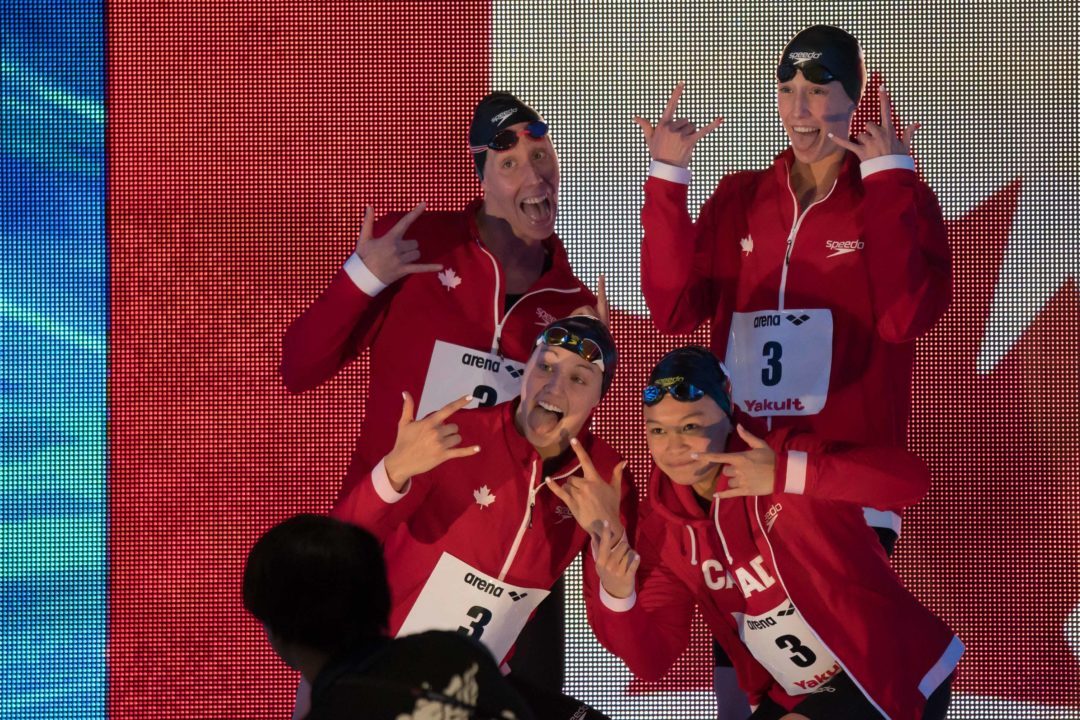 Canada will host the 2022 Pan Pacific Championships, though they haven't announced in which city yet. Archive photo via Mike Lewis/Ola Vista Photography

At the conclusion of Sunday’s final pool session at the 2018 Pan Pacific Swimming Championships, Swimming Canada president Cheryl Gibson participated in an official handing-off ceremony, accepting the right from her country to host the 2022 edition of the meet.

This will mark the 3rd occasion that Canada has hosted, in addition to the 1991 event in Edmonton and the 2006 event in Victoria. The host city for the 2022 Pan Pac Championships has not yet been announced.

Canada is one of 4 charter nations of the event, in addition to  Australia, Japan, and the United States. Japan has the right to host every-other edition, with the other 3 charter nations rotating on the alternate occasion. This system was deviated from for the first time in 2010, where the U.S. hosted what would have been Japan’s turn. In 2002, the meet moved from an every-other-year event to an every-four-years event.

Canada won 8 medals at the latest edition of the Pan Pac Championships, with 2 golds, 2 silvers, and 4 bronze medals in total. That ranked them 4th, which is the same position that they hold all-time on the medals table, ranking behind the other 3 charter nations the US, Australia, and Japan. Canada’s all-time medals tally is 18 golds, 45 silvers, and 74 bronzes.

Their best single-year performances came in 1987 and 1989. Each year, they won 3 gold medals and finished ahead of Japan on the official medals table. They won 0 gold medals in 2010 and 1 in 2014. In their last two hosting editions, Canada 1 gold, 4 silver, and 3 bronze medals in 1991, all by men; and 2 golds, 2 silvers, and 3 bronzes, with their individual pool medals again all coming from men. The country has undergone a dramatic shift in success-by-gender in the last 5 years: 7 of their 8 pool medals in Tokyo last week were won by women.

Canada has several facilities capable of hosting this meet, with the latest-and-greatest being the University of Toronto pool that was built for the Pan American Games.

Other facilities in the Swimming Canada national rotation are the Kinsmen Sports Centre in Edmonton (which hosted the 1991 edition); the Winnipeg Pan Am Pool, and the Olympic Part Sports Centre in Montreal.

I think pan pacs has ran its course.. no longer required due to the presence of other competitions for most of the “charter” nations .. besides not many others parricipare in it unlike the European championships .. even China only send a token team and South Africa used to provide competition ..

Winnipeg has some awesome-sized relentless mosquitoes this time of year

If the USA gets the 2026 edition of the PP’s, please NOT Irvine or any other outdoor facility. This competition deserves respect and an indoor pool that is at a high level with plenty of seating for fans and the curious public. There are plenty of university complexes which would fit the bill. Thank you.

12
0
Reply
Caeleb Dressel Will Win 9 Gold Medals in Tokyo
Reply to  He said What?

Minnesota baby! 😎 I’d love to watch a Pan Pacs here in Tinysota. Or better yet, competing in it by 2026 lol.

2
0
Reply
Hswimmer
Reply to  He said What?

Irvine has more seating than every pool anyone has listed above. It’s also in a geographic location with more interest in swimming than any other in the country.

Can we just kill off Pan Pacs and have worlds every year?

Honestly, that’s what should happen. WCs 3 straight years, then Olympics to end the quad.

I think it should be killed off, but not replaced with a world championship. Even numbered non-Olympic years have European Champs, Commonwealth Games, Asian Games, African Swimming Championships, South American Games, and the Central American and Caribbean Games. Sure the US would have to figure out what to do (have Nationals as the only focus) but its not like the rest of the world doesn’t have a full schedule without adding another world championship.