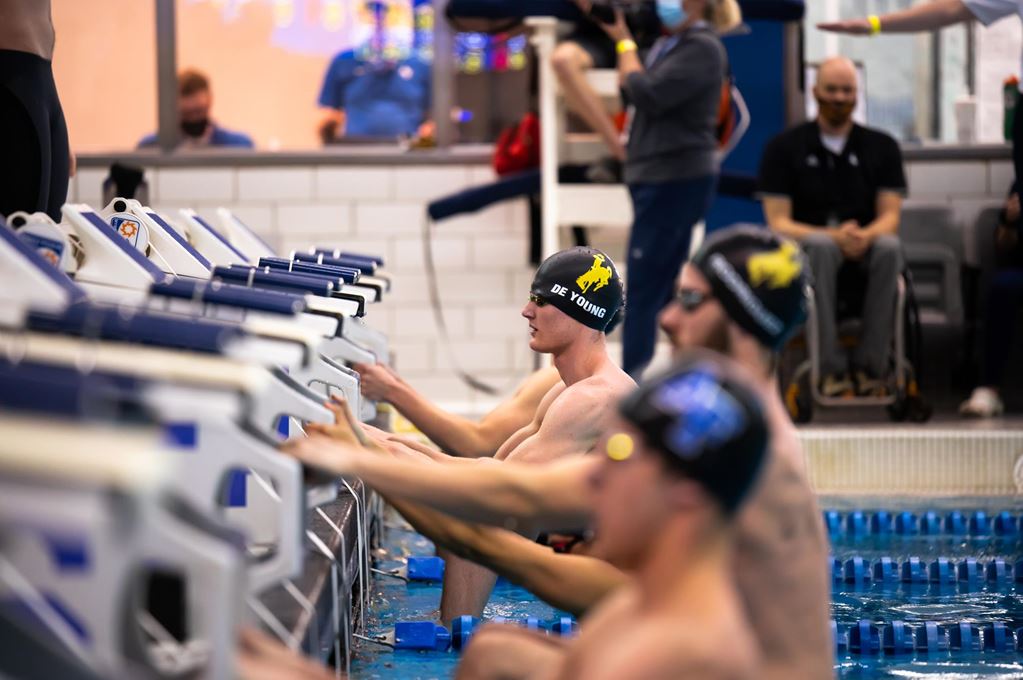 Denver brought only 7 male swimmers to the meet as a result of COVID-19 safety protocols within the team. Wyoming's Max Young (above) swam two lifetime bests. Archive photo via Aaron Pang, USAFA Athletics

The Wyoming Cowboys and Cowgirls swept an intermountain battle against a shorthanded Denver team.

The Denver men, especially, were walloped by COVID-19 safety protocols and only brought 7 swimmers to the meet. This is not the Pioneers’ first issue with COVID this season: in the fall, 38 members of the swimming & diving team were suspended for attending what the school described as a “large party.”

“It was a great opportunity to come down and swim against Denver,” Wyoming head coach Dave Denniston said. “It was different. I don’t want to celebrate the wins that would be disingenuous because DU due to COVID only had seven men on their team that could swim. To their credit, we would like to thank them for still hosting the event instead of canceling it. Our men won by quite a bit but hats off to Denver for allowing us to compete. DU giving us this opportunity means a lot to our program and thanks to them.”

Wyoming won 22 out of 28 events on the day between the men’s and women’s meets.

On the men’s side, with the team battle pretty much decided before the racing began, the Cowboys’ best comparison was themselves from a week ago against Air Force (which, like Friday’s meet, was swum at altitude). In general, the Cowboys were faster this week than they were last week – for example, Ryan Netzel won the 500 free in 4:42.48, which cut 1.3 seconds off his swim from last week.

He was locked in a fierce battle in that swim against Denver’s Mads Rishoj, who was 2nd in 4:42.85. The two traded leads throughout the swim, with Rishoj leading into the final 50 before Netzel used a last-burst effort to take a narrow win.

Grant Sloan picked up a win for the Wyoming men in the 100 breaststroke, touching in 57.45. That’s a new season-best time for him, though at this point last season he was swimming 55s. The team’s top breaststroker, Mitchell Hovis, swam off events.

The women’s side of the pool was more competitive, though Wyoming still came out on top of the defending Summit League champions from Denver.

Among the highlights there was a lifetime-best in the 100 fly from Laelle Brovold, who touched in 58.11 after trailing Denver’s Ines Marin late in the race.

All 6 of Denver’s wins on the day came from their women’s team. That includes Brandi Vu in the 100 breaststroke (there was a timing error, so swimmers were not given official times) as part of a 1-2-3-4 finish for Denver.

In the women’s 50 free, Erika Remington of Denver picked up her 2nd win in 3 meets this season, touching in 23.73. Remington is the Summit League’s fastest 50 freestyler this season by almost a full second; while this swim wasn’t her best time of the year, it was four-tenths faster than anybody else in the conference has been this season. Her best time is a 23.23 which was actually done at a club meet in December back home in Wisconsin; Denver’s first official meet didn’t come until January.

Wyoming’s women placed just 7th out of 10 teams in the 400 free relay at last year’s Mountain West Championship meet – though they return all four swimmers from that relay, any challenge from a swimmer like Theiler to steal a spot on that relay should help the Cowgirls improve.

DeYoung added a second individual win, and second lifetime best, by topping the 200 back in 1:56.63.

The Denver women hop right back into the pool on Saturday for a dual meet with Northern Colorado, while the Wyoming men and women will race again next week.

Both Wyoming squads will be back in the pool on Thursday and Friday, Jan. 28-29 in a double dual against Hawaii and UNLV. The competition is scheduled to begin at 2 p.m. MT on the first day and 10 a.m. MT on the second.

DENVER – The University of Denver men’s and women’s swimming and diving programs fell to Wyoming in a dual meet on Friday evening at El Pomar Natatorium.  Denver’s two programs combined for six event wins on the day, including five from the women’s program.

Meet Highlights
Denver started the meet off strong with a medley relay victory in the 400. The win was the first of two first-place finishes on the day for both Natalie Arky and Brandi Vu who won the 100 back and 100 breast, respectfully.

Just before the first break of the meet, Erika Remington took Denver’s fourth victory of the meet with a time of 23.73 in the women’s 50 free.

Despite not winning the 200 back, Denver’s women picked up nine points in the event when Arky, Sofia Nosack and Emily Vandenberg took spots 2-4 to keep the meet within striking distance.

Denver’s women kept the meet close to the final event, but were out-touched by Wyoming’s 400 free relay by 1.34 seconds to give the Cowgirls the victory.

Up Next
Denver’s women’s program will be back in action Saturday night when they head to Greeley to take on Northern Colorado.

Coronavirus Updates
For the latest University of Denver updates on the coronavirus, click here.

Donate
Fans interested in making a donation to the Pioneers Athletic Fund can do so by clicking here. Your gift will transform the lives of our student-athletes by giving them the first-class resources needed to excel in the classroom, in the classroom and beyond. Thank you for Building Pioneers for Life!

DENVER, Colo. (Jan. 22, 2021) – The Wyoming men’s team earned its first dual win of the season with a win over the Denver Pioneers on Friday night at El Pomar Natatorium. The Cowgirls also finished with a 137-125 victory to move to 6-1 in dual meets.

“It was a great opportunity to come down and swim against Denver,” head coach Dave Denniston said. “It was different. I don’t want to celebrate the wins that would be disingenuous because DU due to COVID only had seven men on their team that could swim. To their credit, we would like to thank them for still hosting the event instead of cancelling it. Our men won by quite a bit but hats off to Denver for allowing us to compete. DU giving us this opportunity means a lot to our program and thanks to them.”

In the 400 medley relay, the Cowgirls finished second with a mark of 3:56.34 with the team of Hannah Mclean-Leonard, Hannah Linde, Kira Crane and Kali Franckowiak. The team of Max DeYoung, Grant Sloan, Harry Tjaden and Austin Crump placed first in a time of 3:28.49.

“Brandon (Samaniego) in the 1000 free swam his best in season time which was nice. We also had some good backstroke swims out of Max (DeYoung) plus Ryan (Netzel) in the 500 free was in a neck to neck race. A lot of good races and the team looked better than we did last week at Air Force. On the women’s side, several freshmen raced and had the chance to shine. Laelle (Brovold) won the 100 butterfly in a comeback win and Madeline (Bane) swam well. We need to give Katelyn (Blattner) credit with a tough double with a 100 freestyle right into a 200 backstroke and won both. Great racing and looking better each time we get to race.”

Grant Sloan placed atop the podium in the 100 breaststroke posting a mark of 57.45 while Aron Markow with a solid time of 58.82. The women’s top finisher was Zoe Robison in a career-best time of 2:00.07.

Blattner followed up with her performance with a victory in the 200 backstroke just one race after the 100 free. She touched the wall in a time of 2:04.09. Erin Eccleston went 2:12.93 for fifth. DeYoung won his second event of the day with a finished with a career-best time of 1:56.63. Andrea Rodriguez posted a time of 1:59.37.

In the final event of the day, the team of Blattner, Carsrud, Franckowiak and Jones placed first with a time of 3:29.89 in the 400 freestyle relay. For the men, Crump, DeYoung, Netzel and Sloan also finished first posting a time of 3:09.43.

Both squads will be back in the pool on Thursday and Friday, Jan. 28-29 in a double dual against Hawaii and UNLV. The competition is schedule to beginning at 2 p.m. MT on the first day and 10 a.m. MT on the second.

Both coaching staffs are class acts