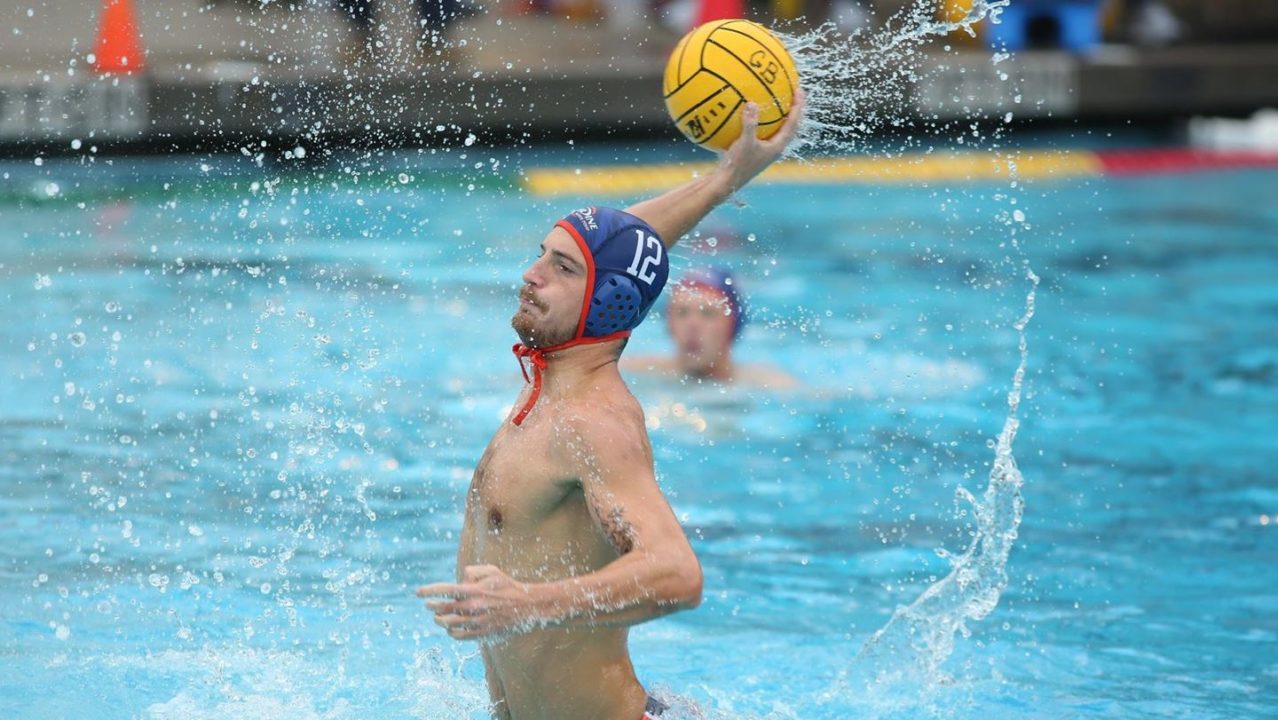 All-American goalie Cassidy Ball made five saves during the final minutes and the Cal women’s water polo team held on to defeat No. 9 UC Santa Barbara 11-10

The VMI women’s water polo team dropped its first match of the 2021 season Saturday to Salem University (W. Va.) 18-10 in a match played at the Villanova.

The Waves (2-0) led the Falcons (0-2) throughout the entire day, led by Balazs Kosa (Csik Ferenc Általános Iskola és Gimnázium) with nine goals on the day.

GAME 1 RECAP
The Falcons scored the first goal of the day, but the Waves answered quickly, scoring the next four goals. Three were from Kosa, including a penalty shot, and the fourth was from Kaden Kaneko (Huntington Beach, Calif./Mater Dei HS), giving the Waves a 4-1 lead after the first quarter. Air Force scored first in the second quarter, but Nico Tierney (Sierra Madre, Calif./Harvard Westlake HS) and Anthony D’Ambra (Rolling Hills, Calif./Palos Verdes HS) answered to give Pepperdine a 6-2 lead at the half.

The second half was much of the same, as the Waves got goals from Jake Howerton (Cardiff, Calif./Cathedral Catholic HS), Kosa and Austin Smit (San Diego, Calif./Cathedral Catholic) to take a 9-3 lead. Kosa got his sixth goal at the end of the third, and Michael Dakis (Orinda, Calif./Miramonte HS) to give the Waves a 10-4 lead after three quarters of play. In the fourth, the Waves got goals from Kosa, Smit, Sean Ferrari (Redwood City, Calif./St. Francis HS) Travis Reynolds (Rolling Hills Estates, Calif./Loyola HS) and goalie Kent Emden (Chicago, Ill./Naperville Central HS) to seal the victory.

GAME 2 RECAP
Game two started much the same way as the first, as the Waves jumped out to an early lead. Tierney scored first. Kaneko then gave the Waves a 2-0 lead. Max Sprute (Van Nuys, Calif./Notre Dame HS) then scored and the Waves led 3-1 after the first quarter. Nicholas Fichmann (Sāo Paolo, Brazil/Orange Coast College) opened the second quarter with a goal and Ferrari followed to give the Waves a four-goal lead. After a Falcons goal, Sprute got his second goal. Ferrari and Reynolds scored back-to-back goals to end the half, giving the Waves a 7-3 lead.

Kosa got his first goal of the game in the third quarter, and Fichmann got his second right before the end to give the Waves a 9-6 lead after three quarters of play. In the fourth, Kosa scored after two Falcons goas, and Ferrari got his third of the game to cement the 12-7 win.

UP NEXT
The Waves hit the road next weekend, taking on #3 UCLA on Saturday at 11 a.m.

MALIBU, Calif. – The Air Force water polo team opened the season with a pair of losses to fourth-ranked Pepperdine, 16-9 and 12-7, Saturday, Jan. 23, at the Raleigh Runnels Memorial Pool in Malibu, Calif.

After a pair of Pepperdine goals, Falcon junior Corey Tanis scored at 5:50 of the third to cut the Waves lead to 8-3. Air Force junior Sam Fuller scored with 28 seconds left in the third, but the Waves added a late goal for an 11-4 lead after three quarters. Air Force scored four goals early in the fourth quarter as Hirjoi netted his third of the game to cut the Pepperdine lead to 11-7.Henry Yavitt found the back of the net on the power play with 4:11 left to make the score 13-8. After a Pepperdine goal, Snyder scored on a five-meter scot to make it 14-9 with  1:06 left. The Waves added two late goals to make up the final margin. Anthony Tolbert made five saves for the Falcons.

In the second game, Pepperdine scored the first two, but Snyder netted his second of the day with 52 seconds left in the first. Pepperdine scored the next three, Fuller scored to make the score 5-2. With 16 seconds left in the second, Yavitt’s goal on a penalty shot made the score 7-3 late in the second. Senior Jason Hires scored his first of the season at 5:55 of the third to cut the Waves lead to 8-4. After forcing a turnover, Fuller’s second of the game cut the Waves’ lead to 8-5 with 5:20 left in the third. The teams traded goals in the fourth as Snyder and Sebastian Sak scored for the Falcons.  A.J. Kuypers made nine saves for the Falcons.