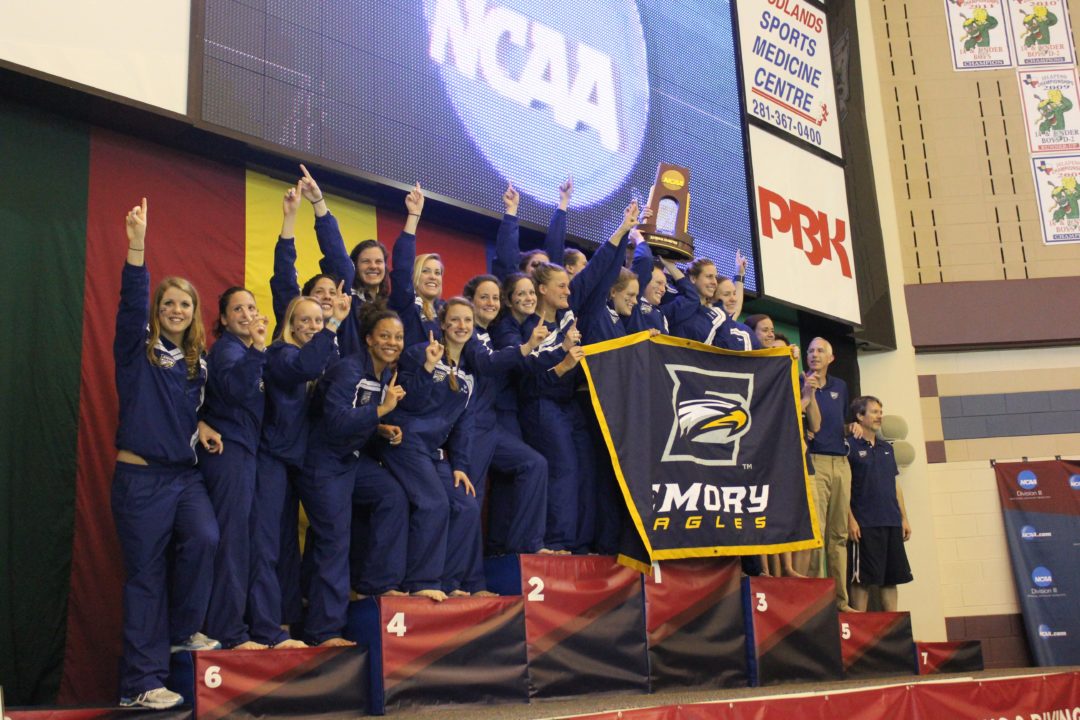 So, after some heavy duty training, December's midseason meets gave us all some fast swims to marvel at and enjoy. But the big question on everyone's mind is always - so what next? Midseason is a great way to look forward to what might be coming up in March for those athletes who will be rep-ing their teams at IUPUI in March for the NCAA meet. Current photo via Emory Athletics

>​So, after some heavy duty training, December’s midseason meets gave us all some fast swims to marvel at and enjoy. But the big question on everyone’s mind is always – so what next? Midseason is a great way to look forward to what might be coming up in March for those athletes who will be rep-ing their teams at IUPUI in March for the NCAA meet.

There have been a lot of women dropping some pretty dang fast times, and the meet for this coming year seems to be shaping up to be – if it’s possible – even more exciting than in years past. A few new players have emerged on the scene, and it will be fun to see what these teams can do.

In creating this ranking, I’ve gone through a lot of trouble trying to keep it as unbiased as possible. For example, out of the top four teams at NCAAs last year, Emory graduated the most points in their senior class, and Denison graduated the least. I’ve also taken and ​shuffled in ​up-and-coming swimmers into the Top 16 mix from last years Nationals (sans graduated seniors), and built aggregate relays for teams – like Emory – who didn’t field 800 free relays at midseason, or teams – like Gustavus – who didn’t play their four fastest cards in a given relay.

Part of the process, too, is in how teams have showed up at NCAAs and Conference champs in years past, to qualify swimmers and to drop significant amounts of time that could place them higher than midseason might otherwise indicate. ​​

And without futher ado, the results for the top 25 teams after midseason are these:

Enjoyed your analysis. Only comment I have is Taylor Kitayama of JHU is definitely a dominant swimmer but not in freestyle sprints; she’s currently 1st in 100 Back, 1st in 200 Back, 1st in 200 IM, 5th in 100 Fly and 7th in 200 Free…its not that she couldn’t BE dominant in sprint freestyle, she just doesn’t swim those individual events very often because her other strokes are so strong.

Smok’em Jays! Seriously George Kennedy is one if the best coaches and men in the sport! These must be extrodinary women. Keep up the good work in “the city that reads”

Emory women have actually won for the past four years, not three. Soon to be five years in a row.

Swimfan – right you are. Correction made above.