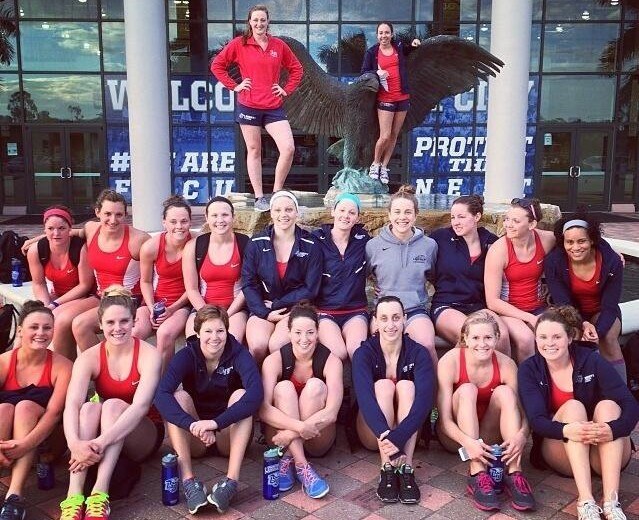 The Liberty flames pose Friday with the Eagle statue that is the mascot of rivals Florida Gulf Coast. Current photo via Jake Shellenberger

The Florida Gulf Coast Eagles, 5-time defending champions of the rising Coastal Collegiate Swimming Association (CCSA), have cancelled two home swim meets in January after the Aquatics Center staff discovered 5 leaks in their 50-meter pool. That will require them to empty the tank and for patches to be placed.

Home meets on January 4th (Saturday) against Liberty and January 14th against Radford have both been cancelled, meaning that the Eagles, who sent their first NCAA qualifier in the program’s brief history to Indy last year in Emma Svensson (it was her second appearance in as many years), will resume competition at home against Florida International on January 25th. In the event that the pool is still not available that time, an off-campus backup location has been scheduled.

The biggest disappointment is that this will call off a battle of CCSA women’s powers Liberty and FGCU. The two teams were 1st (FGCU) and 2nd (Liberty) at last year’s CCSA Championships, and with the Eagles graduating a big load of swimmers, Liberty has a first-ever conference title in their sights, and have made no secret about their intention to win it this year. On the flip-side, Florida Gulf Coast is the 5-time defending conference champions, and have brought in some immediate-impact swimmers, like Dutch National Record holder Kira Toussaint, to replace their graduated seniors.

The frustration of this cancellation should add even more fuel to the fire as the two teams build toward the conference meet that will be held in Knoxville, Tennessee from February 19th-22nd.

Liberty is in Florida this week on a winter training trip, which was scheduled to coincide with this meet. These two programs have been shining examples of fast-rising mid-major programs; the two are already recognized as two of the better mid-majors in the country, with Liberty in its 4th season of existence and Florida Gulf Coast in its 7th.

To take the place of the meet Liberty and FGCU will combine for a dive quality practice tomorrow morning.The second annual combined practice. Can’t miss a good chance to race.