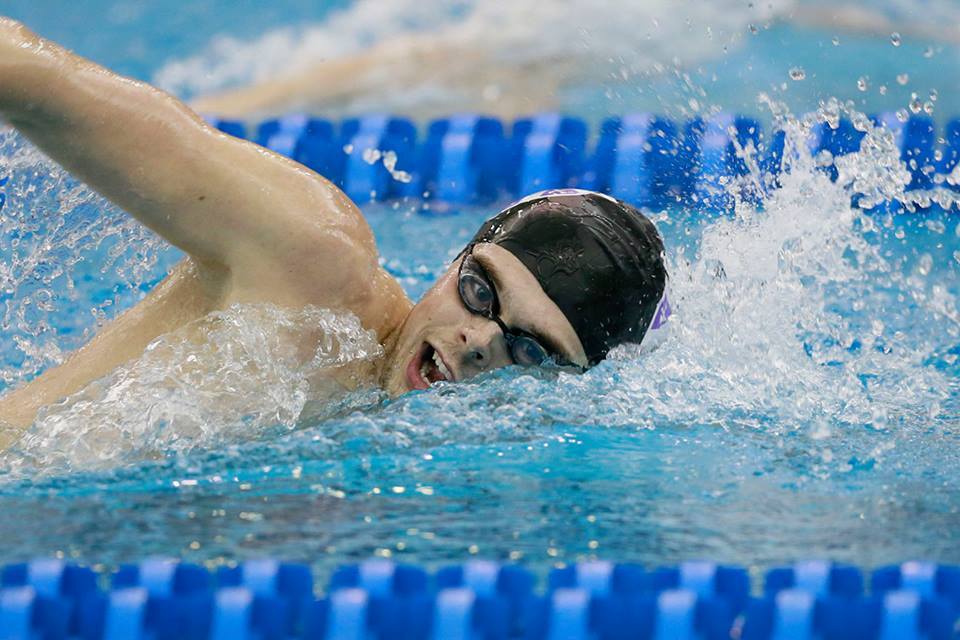 Arthur Conover paced the Lords in their Friday showdown against OSU while sophomore standout Hannah Orbach-Mandel impressed on the Ladies' side for Kenyon. The dual meet resulted in an OSU win on both sides. Current photo via Carlos J. Morales / AltaSky LLC

While the Division III powerhouse Kenyon fell to Division I foes Ohio State this Friday, the uneven match-up still sparked some strong swimming from both sides.

Sophomore Hannah Orbach-Mandel threw down two of the Ladies‘ three wins – before the Buckeyes began swimming exhibition. She came away with victories in the 100 and 200 freestyle events. The 51.33 in her 100 puts her at the top of the Division III standings this year by .8 seconds and is exactly .81 seconds under the B cut for this year. However, Orbach-Mandel’s 200 freestyle might be even more impressive. She put up a 1:50.0 at the NCAC Relay Meet  and then from a flat start this weekend recorded a 1:49.99.

For a dash of perspective, Orbach-Mandel’s lifetime best is a 1:49.96 from the 800 freestyle lead off at NCAAs last season. The time she just swam in a dual meet would have put her 4th at the 2015-16 NCAA Championships, and less than three tenths away from runner-up.

Orbach-Mandel also swam on both the 200 medley and 400 freestyle relays. She joined Summer Otazu, Laura Duncan, and Hollie Hopf for the medley, anchoring in 23.06 – the fastest leg in the field by more than half a second. While her effort managed to hold off OSU‘s B relay squad, it wasn’t quite enough to catch the A team.

In the final event of the evening, Orbach-Mandel teamed with Abby Wilson, Princess Ferguson-Nguyen and Zoe Toscos to claim first-place points in the 400 freestyle relay. (Ohio State swam exhibition after the women’s 500 freestyle.)

Orbach-Mandel wasn’t the only one throwing down against a DI foe. After leading off the runner-up 200 medley relay just .01 slower than OSU‘s Marianne Kahmann, Otazu came back in the 100 backstroke for the victory. She held off a late charging Kahmann to win in 57.37. That’s the third fastest 100 backstroke so far this season in Division III.

Finally, Toscos secured an individual third place in the 50 freestyle (24.56).

The Ladies will return to the pool November 11th for a dual meet with NCAC rival Denison University.

On the men’s side of things, the Kenyon Lords also fell to OSU, outscored 186-103. OSU‘s team got their hands on the wall first in every event, but near the end of the meet swam exhibition.

While Orbach-Mandel paced the Ladies, distance specialist Arthur Conover worked on doing the same for the Lords. Conover claimed a runner up finish in the 1000, and first place points in the 500. (The 500 was the first event the Ohio State Buckeyes swam exhibition, so Conover was actually second to the wall behind Brayden Seal.) His times (9:26.81 in the 1000 and 4:35.45 in the 500) have him ranked first and second, respectively in Division III so far this year.

Not to be outdone, Mick Bartholomew put up a third place finish in the 200 backstroke (1:52.60), squeaking into a loaded field of top backstrokers in Division III, the top six of which are all freshmen. Bartholomew also finished behind Reardon in the 200 IM for runner up points (1:55.96).

The Lords will return to the pool November 11th for a dual meet with NCAC rival Denison University.