10 Things To Think About During Swim Practice 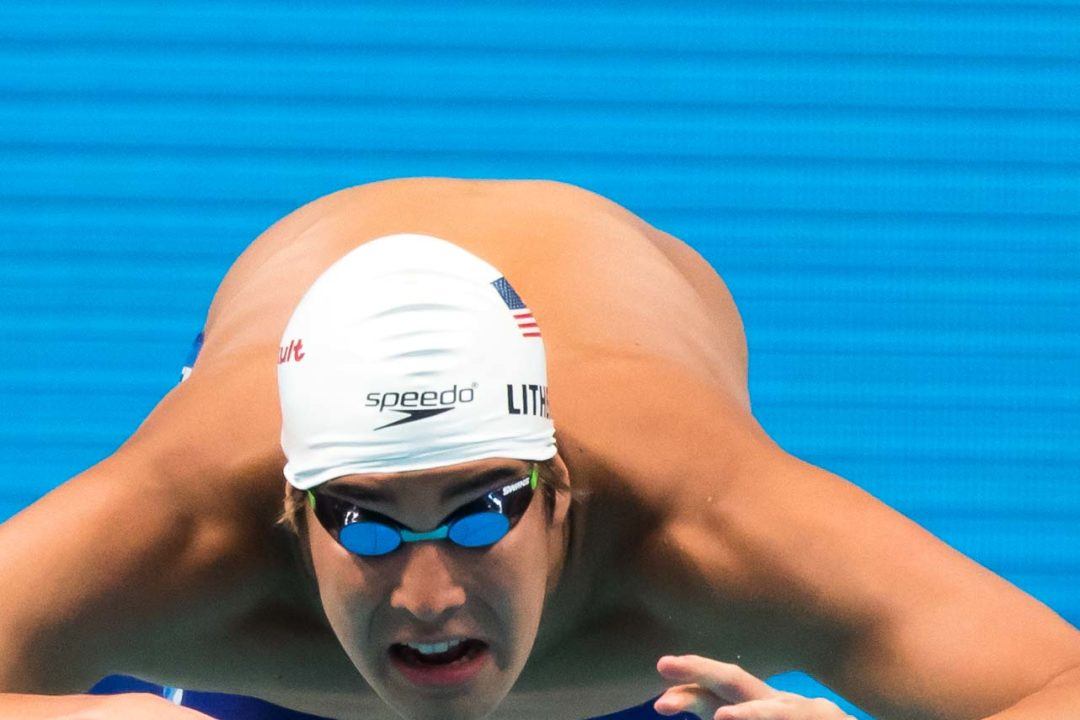 It's time to get engaged, and that means thinking during practice. But maybe you aren't sure where to begin. So here's a list of ideas for you! Current photo via Mike Lewis/Ola Vista Photography

In the 7 Habits of Highly Effective Athletes, one of the important things swimmers need to do is become engaged during practice. Here are a few more ideas of things to focus on while you battle your way through another “mindless” aerobic workout.

Everyone jokes about following the black line all practice, but I’ve known plenty of athletes who spent more time looking for the wall than down at the pool bottom. Raising your head out of the neutral position does wonky things with your body position – not to mention it can give you a seriously sore neck after two hours. Relaxing your neck to lower your head may, at first, feel like you’re burying it. Ask a coach or a teammate to tell you if your senses are giving you accurate information. The waterline should be about mid-cap on the top of your head, deep enough that when you rotate to breathe, one goggle is easily submerged.

2) Finish Past the Wall

Frequently, sprinters are the only ones who seem to grasp this concept – and only during their fast sets. What’s the difference between finishing well in a fast set and making sure to touch the wall before lifting your head during warm up? Really, there is none. Your body will do in a race what it has trained to do in practice, and if it has learned two different behaviors in workouts, your body is going to pick the easier one when you’re too dead exhausted to tell it differently.

For distance athletes – maybe most races don’t come down to touch-outs, but how great is it to be able to brag that you out-touched your competition by .01 in the mile?Or, in a race that isn’t supposed to be so close, would you rather explain to coach how lifting your head and gliding on the way in managed to lose you that race by a hundredth?

So here it is – whether it’s reps in warm up, warm down, hard aerobic work or guns blazing pace sets, drive hard into that wall. It’s not hard to do, and everyone loves down-to-the-wire victory stories. Especially the victors.

When you’re swimming, can you answer this question? Where do you put your hand in? Where do you lock into your catch on the water, and what’s the pattern of your pull? When you do butterfly do you make a keyhole shape, or do you pull straight down like two simultaneous freestyle arm pulls? Knowing where your hand is in the water can help create a physical awareness that will allow you to make adjustments in a set as you get tired. Know what swimming “right” feels like, so you can keep your body engaged as it gets tired.

Also, building a kinesthetic awareness can help you make changes in your stroke – like if you sweep out too wide in your catch, or cross over underneath your body as you pull. Ask a coach to look at your stroke for suggestions.

If you do underwater kick sets, counting your kicks is the surest way to get across the pool without panicking that you are going to drown. There’s just something about knowing that there are only X more kicks to go before you can surface and gulp in sweet air for a few seconds before having to resubmerge and do it again.

Counting doesn’t just help with kick sets though – knowing how many kicks you take off each wall in a race can help you prepare in practice to become better. Experiment – do you swim faster with a few more kicks? Or fewer? Once you know your number, try to maintain it off every single wall. If you’re doing repeat 200s, make sure that last wall has the same (or more!) kicks as the first wall. If you don’t count, you won’t know.

Along the same vein as counting your kicks, counting your strokes provides a good idea of where you are in the pool, and how your training compares to your racing. If you are practicing at race pace and you know you take 15 strokes a length, but today you’re hitting 19, think about holding onto more water, and maybe slowing the arms down a little. If you usually are at 15 and today it’s only taking 13 strokes to cross the pool, see if you can decipher what’s different. Are you going slower? Are you going faster? Are you taking more kicks off the wall than usual? Are you holding onto water better? Knowing what you are doing in practice is a good way towards becoming your best self.

While at one point or another, we all want to kill the clock because the sendoff approaches too soon, or time stops and practice takes forever, the clock is a tool for you. Use it. Know your times – on everything. I know my splits for a warm up 300. That’s probably overkill. However, knowing how fast your easy is will give you an idea of where you stand before workout even begins for the day. You might feel crappy in the water, but if you look at the clock during warm up and see you’re cranking out 1:05s on easy 100s – maybe despite how you’re feeling, your body is ready to go today!

The other part of this is remembering your times. I don’t know how many times I’ve heard coaches ask their athletes, “What’s a good time for you on this set?” and all they get is a shrug in response, or a wild guess after a minute’s hesitation. Don’t be that athlete. Know that a 30 second 50 breast might be outside your range on :40, but that you can cruise :28 freestyle 50s on that same interval without breaking a sweat.

Do not look up when you start a turn. Do not raise your head. Do not grab the wall and try to climb to the ceiling before giving up and resubmerging to push off dejectedly in the other direction. Turns are like finishes for many people – we’ve got so many of them during practice that we just sort of tune them out. In some aspects, turns areworse because there are so many more. That’s good news as well as bad. Because there are so many turns, and because we get sloppy in long sets where we’d rather think about the latest gossip on Facebook or what’s for dinner, often we train our bodies to be sloppy where turns are concerned. Heads raised, feet crossed, one-handed open turns – all sloppy. All fixable. Because there are so many turns, if you think about them all the way through that set of 12 x 200, in the space of one set, you can begin to make a difference in your swimming. Pretty cool, huh? The downside is that to keep any alterations you make you’ll have to keep thinking – for a lot of practices, until the changes take hold and your body forgets how bad it once was in light of how good it has become.

Ever heard another athlete tell her coach that she could have had a great 100 fly, but her breakouts were bad? Got caught under water, kicked too far so her feet were breaking the surface, lost momentum, just plain stopped in the water.

Don’t be that swimmer. When you’re dealing with breakouts, some sort of speed is key. Gliding to the surface is not okay. Off every wall, you have a chance to figure out what the best way for you to begin swimming is. Coaches can give excellent pointers on things like this one.

Usually I don’t condone asking questions during a practice, but if you’re really stuck for things to think about, this question can sometimes work wonders. Occasionally a coach will ask you to do something that sounds ridiculous. Maybe it’s a 200 of backwards swimming. Maybe it’s butterfly with a freestyle kick. Maybe you’ll spend twenty minutes swimming in circles without touching the wall – whatever it is, sometimes asking what the point of a crazy notion is, is a good idea. Knowing what you should be striving to accomplish in the set is part of the point, after all – no good going through the motions if you won’t be able to gauge your own success!

But don’t ask questions when it’s an aerobic set you want to get out of. You won’t escape.

If you’ve run out of things to think about in practice, then this little nugget might get your brain going again. Listen to what your coach tells other athletes. Think about your own stroke, and whether you are doing what your coach is asking someone else to do. This one requires a lot of control: if Coach tells Swimmer A he needs to stop reaching so far on his freestyle and you take the advice, you may not be getting from it what Swimmer A would (if he turned his brain on and listened). Maybe your freestyle arms are already right. The point of eavesdropping is trying to gain nuggets to compare to your own technique and see if there are areas where you might be able to improve. But check with your coach before making any radical changes!

Any other thoughts or ideas for things to work on and think about during practice?

If this is the thing you are thinking about during practice, you wouldn’t last long in my pool.

haha so true my coach would kill me!

I would say people who think about when the practice is going to end, are the ones that are in the pool for the wrong reasons 🙂

Thats very true. This guy in my group swims only to make his parents happy, and thats immature.

yup. I know one of those too.

what should we hit before going to a swimming competitiion

Number 6. It amazes me how many of the swimmers that I swim with do not know their practice times. When coming into the wall after a hard 300 I hear the question “When did you leave?” To me that is not paying attention and if you are going to swim hard, then wouldn’t you want to know how fast you were going????

In my group, te coach will occasionally ask, “What was your time?” and if you dont know you get sent home.

Great!! Every swimmer should read!!