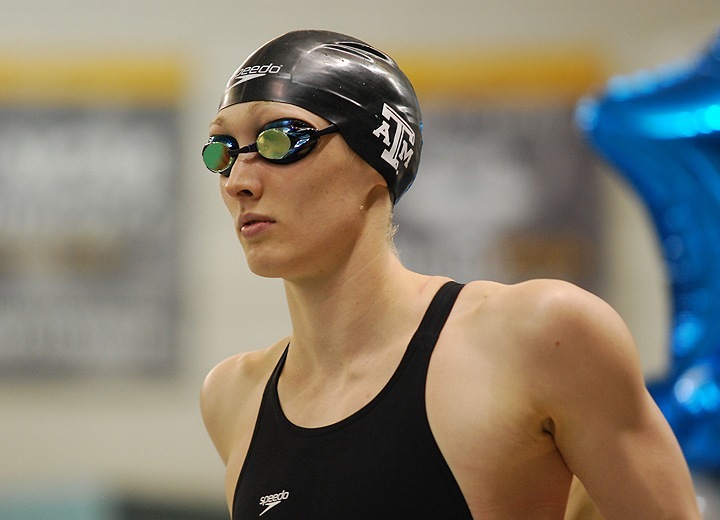 Breeja Larson and the Aggies followed up a big Friday night with an even better Saturday morning, picking up 26 points from their seeds and have an outside shot to enter the battle for second with one more great session. Current photo via Janna Schulze/SwimSwam.com

Texas A&M had a fantastic morning at the final prelims session of the 2014 Women’s Division I NCAA Championship. The Aggies lead the nation with 9 point-scoring swims tonight (not including platform diving or the mile). 4 of those 9 are in the championship final, including two top seeds (Breeja Larson, pictured above, in the 200 breast and Cammile Adams in the 200 fly).

Georgia has all but sealed the team championship at this point, and padded their stats with 4 swims up (in the A-final) and 3 down (B-final). Stanford also had 4 swimmers up as the Cardinal hopes to hang onto second place.

Cal has 5 point-scoring swims tonight, plus one likely point-scoring diver as they try to hold off A&M for third place and perhaps run down Stanford for runner-up honors.

The full list of ups and downs is below, not including platform diving or the mile:

As we have the past two days, we scored out prelims and compared them to the scores we got when scoring out the psych sheets a few weeks ago. The “+/-” column indicates if the team gained (+) or lost (-) points from their seeds based on preliminary swims.

The Aggies picked up a huge 26 points this morning, many of them in the 200 breast where they’ll score 3 swimmers tonight and hold two of the top three seeds. Georgia was at the other end of the spectrum, dropping a whopping 33 points from seeds. The biggest culprit for the Bulldogs was the 400 free relay, where they dropped from the top seed down to fourth. That’s not a huge fall place-wise, but the double relay points really add up. The upside is that a big finals swim could gain lots of those lost points back.

Stanford continues to exceed expectations, picking up 19 points, while Cal dropped about 6.5. Those two teams look primed to battle for the runner-up spot tonight unless A&M can make a big enough charge to put themselves in the conversation.

A&M were the biggest risers, but Tennessee also had a great morning, picking up 22 points from seeds. Behind Georgia, the next-biggest faller was UNC, which lost 18 points and also will lose a big scoring opportunity with NCAA record-holder Stephanie Peacock‘s scratch from the mile tonight.

Finally, based on our prelims scoring, we’ve projected out the top 15 teams for tonight. These scores include the team’s current running total plus our prelims scores, but don’t include platform diving or the mile.

At the moment, Stanford looks safe in the 2-slot, but the 26.5-point margin over Cal is still close enough to change based on a big performance for either team in diving or the mile, or a high-point disqualification. Despite A&M’s great morning, they’re still left in fourth based on these predictions, but appear set to run away from USC big-time. Florida and Tennessee are still very close for 6th, and it looks like a great team battle is shaping up for the last few spots in the top 10, with Arizona fairly safely in at the moment and Texas, Minnesota and Virginia in line to battle it out for the last two spots.

Reminder: these scores do not include platform diving or the mile:

Unless I’m looking at an old psych sheet, Stanford has nobody in the mile and Cal has only Breed who is ranked last and would have to gain 25 seconds to be seeded in the top 16. In the diving, Stanford’s only diver finished last in prelims and Cal’s only diver finished 4th. Looking through the prelims results overall, Cal does have some opportunities to close the 26.5 gap on Stanford, particularly in the relay, the 2Back and the 100free, but will have to hit them all, and their diver needs to stay or move up too. But the way DiRado has been dominating, she could move up too and pull off an upset win, and given their relay dominance,… Read more »

UGA has a diver in top and then 3 likely scorers in the mile….they should win by over a 100 points over Stanford. Not bad considering they graduated Schmitt and Romano and no one thought they had a shot defending against the great Cal Bears with Missy Franklin. It is a team sport, not a star sport.
And the future is Stanford. They are going to take the limelight from Cal.

Well it’s always been true that GA had more depth than Cal and many folks, including me, have had GA as the favorite all year based on their superior recruitment and freshman class, and their performances since the beginning of the fall season. It’s true that Cal has relied more on “stars” and 2 of their 3 stars are underperforming as well, along with some of their 2nd tier, and have been all winter, although they weren’t too bad at SEC’s. But it’s Georgia that Stanford may be taking the limelight away from, not Cal. By the way, Franklin lost her NAG to her Olympic teammate Simone Manuel this week, so look for her to be under 47 and take… Read more »