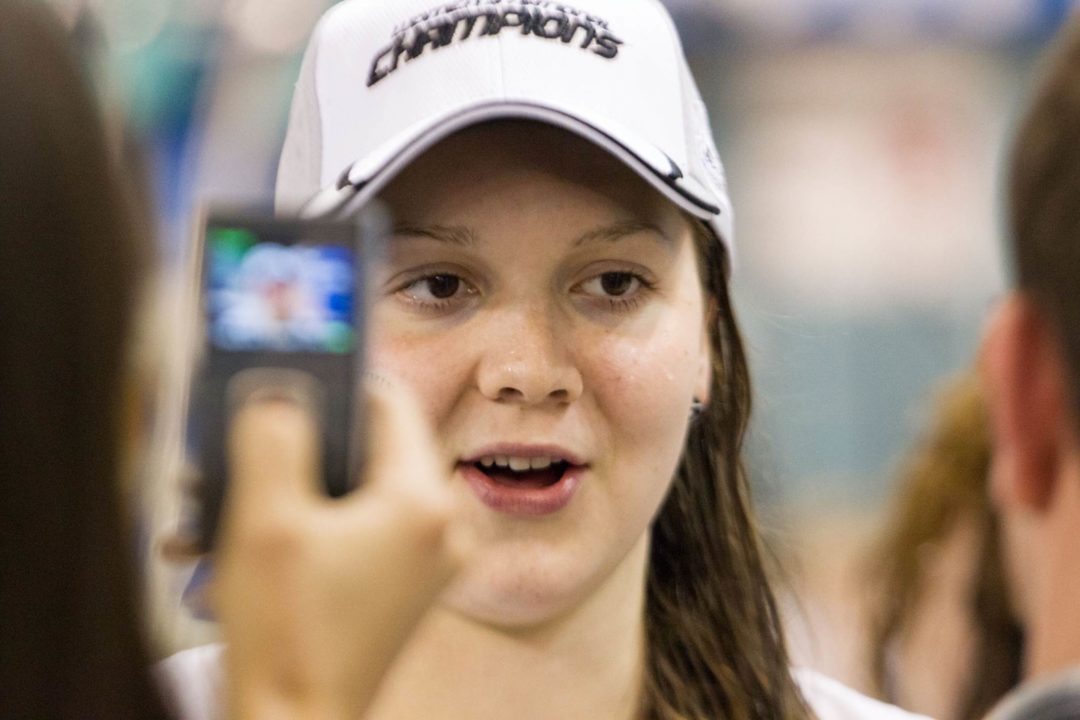 With Harvey Humphries at the helm of the Georgia women's team at NCAA's, the Bulldogs repeated as NCAA Champions - but it felt very, very different from their 2014 title. (Featured Image Brittany MacLean) Current photo via Tim Binning/TheSwimPictures.com

It’s time for our 2nd big thing from the 2014 Women’s NCAA Championships, which is specifically “how, exactly, did the Georgia women repeat as NCAA Champions?”

This question sort of straddles the line between pure mathematical curiosity and a little bit of post-facto incredulity.

Coming into this season, it looked as though there were two contenders for the title, Cal and Georgia, with Stanford charging hard from the outside (but looking still a year away).

Though we picked Georgia in our final pre-championship picks, earlier in the year, we had Cal as the strong favorites.

It was hard to envision the Georgia women repeating as champions: simply put, the Bulldogs didn’t look as good in the things that won them the 2014 NCAA title. After graduating Megan Romano and Allison Schmitt, two of the best freestylers in the country (at any level), Georgia’s freestyle group just couldn’t possibly be as strong.

And it wasn’t, as the numbers would bear out.

But, as it turned out, the freestyle group that Georgia has built their reputation on for so long didn’t need to be nearly as good as it was in the past.

Make no mistake, the Georgia freestyle group was still dominant. They scored 194 freestyle points, which is over twice as many as the next-best freestyle group (ironically, that was Cal at 95 points).

But they weren’t as dominant as they were on the way to the 2013 title.

The biggest tradeoff was the incoming freshman Olivia Smoliga. In races where she was involved, the Bulldogs went big, really big. Sure, she won the NCAA Championship in the 50 free on the meet’s first day, but it was her backstroke that helped give Georgia this title.

She won the B-Final in the 100 back, which gave Georgia 9 points – 9 more than they scored in that event last year.

They also scored a total of 28 more points between the two medley relays, and though nobody was putting up the kind of anchors that Megan Romano was last year, that dropoff was more-than-made-up for by Smoliga’s backstroke legs.

As compared to Kelsey Gaid, who led off the UGA 200 medley in 2013, Smoliga was a 1.2 second improvement (which is a lifetime in that race). On the 400 medley relay, Smoliga improved six-tenths over then-leadoff Megan Romano.

The other key was the senior Melanie Margalis. Her improvements were obvious all year long, but her work in the medley relays (more modest than Smoliga’s drops, but still very valuable drops) were a big part of the equation, and her runner-up finish in the 400 IM led to an overall +19 point improvement as compared to last year.

Getting Amber McDermott into the A-Final of that 400 IM, plus Nicole Vernon and Hali Flickinger into high spots in the B-Final, contributed to that 400 IM scoring as well.

The final key to the puzzle was diver Laura Ryan. When she transferred in to Georgia during her junior season from Indiana, she had a nice NCAA Championship meet (that included a 5th-place finish on the platform), but wasn’t an absolute game-changing dynamo.

As a senior, though, she was the NCAA Diver of the Year, and scored 56 points. That is a game-changing performance.

At the end of the day, even had we predicted Georgia to repeat as champions from day 1, I don’t think we would have predicted them to score 50 more points in 2014 than in 2013. That’s a lot of points.

The 2014 title didn’t have as many champions, they didn’t win any relays, but it was much more of a team effort, and I think the momentum from that team effort is what drove them to such heights. Every training group was involved; almost every NCAA-qualifying swimmers scored, and that momentum is so important in these team meets.

In 2013, there were 4 races in which Georgia didn’t score. In 2014, there was just a single race in which Georgia didn’t score, and I think that best sums up this idea of “momentum”. There were no lulls, no opportunities for distraction, no chances for swimmers to let their guards down. There were still stars on this team, but there was no superstar along the lines of an Allison Schmitt, who didn’t have a great senior meet in 2013.

By contrast, this year’s Georgia team got hot on day 1 of the meet when Brittany MacLean, who might soon be a superstar in her native Canada, beat Missy Franklin in the 500 free on day 1 with a great come-from-behind victory.

The 2013 team was probably a more talented team, a team that will be longer remembered for the swimmers who were on the team. The 2013 team overwhelmed their competition with talent. They had one swimmer coming off of the 2012 Olympics, and three going into the 2013 World Championships as members of Team USA. The 2013 team could have been a Pan Ams team and dominated the medal tally.

The 2014 team, however, was a better TEAM, top-t0-bott0m. They overwhelmed with depth, with momentum, with precision, with execution at NCAA’s.

Also worth at least a mention, Maddie Locus. Her development between 2013 and 2014 was very critical.

Great analysis but I’d like to mention two other things that helped them win. They’re a very close-knit team that truely cares about each other and they have hearts the size of Georgia.