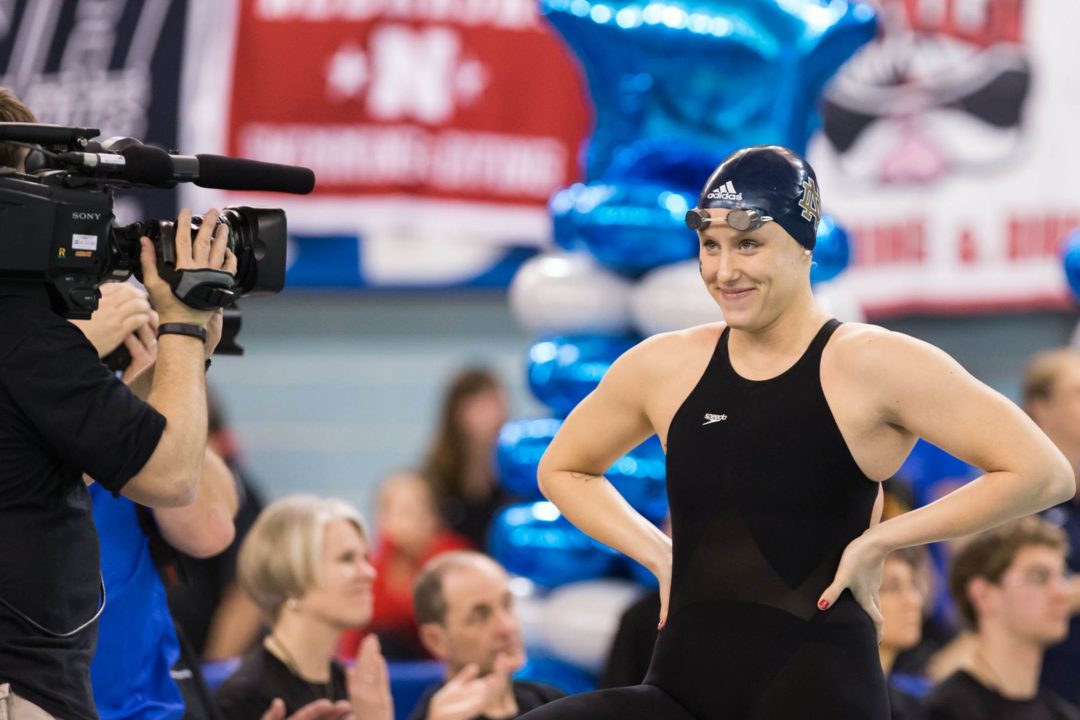 Emma Reaney pushed through the suddenly-intense media glare to smash the American record in the 200 breast for the second time in a month while winning the first NCAA swimming title in Notre Dame history. Current photo via Tim Binning/TheSwimPictures.com

It’s one thing to put together a breakout swim and knock down an American record from the front of the field. To repeat the feat just a month later in college swimming’s brightest and most intimidating spotlight against the best in the nation is quite another thing entirely.

But for Notre Dame junior Emma Reaney, they weren’t so different after all. She did both with flying colors in a season that will now go down as her official introduction to the elite tier of American swimmers.

Reaney had been quietly putting together big swims and bigger improvements for quite some time leading up to this season, but 2014 was clearly a step into the spotlight for Reaney, who had perhaps been overlooked in the past while swimming for the Notre Dame Fighting Irish, a school that hasn’t garnered as much national attention than the Californias and Georgias of the world.

As the Irish made a dramatic step up from the Big East to the ACC, Reaney elevated her game accordingly, blasting to the ACC title in the 200 breast and breaking the American record held by SEC star Breeja Larson in the process.

From that moment on, the landscape had to change some for Reaney. Suddenly there would be no escape from the blinding spotlight. An American record-holder doesn’t have the luxury of flying under the radar or surprising the field. The expectations increase dramatically, the pressure exponentially. You never know how a swimmer will respond to that kind of change in mentality.

But at the ultra-intense NCAAs, Reaney proved she’s the real deal. The second seed to Larson after prelims, Reaney kept her composure through all the media glare – the headline photo of this story might say it better than any words can. Undaunted by lights, cameras and a raucous Minnesota aquatic center, Reaney blazed to an early lead with a stroke that was simultaneously powerful and deadly efficient. She never faltered down the stretch, rocketing to yet another American record in 2:04.06, as well as the first NCAA swimming title in Fighting Irish history.

With one year of college left, Reaney has taken a huge step for her Notre Dame program, and she’s on the cusp of moving the entire 200 breast as an event ahead too, sitting just a few hundredths off the first 2:03 in American history. She’ll spend the summer training at SwimMAC (a decision she and Notre Dame coach Brian Barnes came to way back in August) before returning to Notre Dame for her senior season.

Reaney’s now on her way to becoming a household name in the U.S. breaststroking conversation. If her HardCore swim at the NCAA Championships made one thing clear, it’s this: Reaney is the real deal.

I would have chosen the stunning 1.40.31 by Missy Franklin in the 200 free.
But Emma Reaney also deserves a big mention.
What a great season for her.
I can’t wait to watch her in long course next summer because I don’t know what to expect. Nobody knows her limits. Short course and long course are 2 different things but I don’t see any reason for her to not shine in the big pool as well.

There isn’t her entire 200 breast race in the video, only some parts, but it’s still better than nothing. 🙂
http://www.youtube.com/watch?v=yLvVRu8UtnU

It was a tough choice between Missy’s 200 free, Stanford’s 400 medley relay and Reaney’s breaststroke – all three American records. Maybe being a breaststroker myself, I’m too partial to the greatest of the four strokes 🙂 but I was so impressed with how powerful Reaney’s stroke looked live that I thought her race deserved some more mention

It would have been nice to include the entire swim, not just about 45 seconds worth.

Yes. And that’s the only race from the NCAAs I have found on youtube. There’s nothing else so far! 🙁

I HAVE FOUND HER RACE! ENJOY!
http://www.youtube.com/watch?v=d0XGwvvXpAk