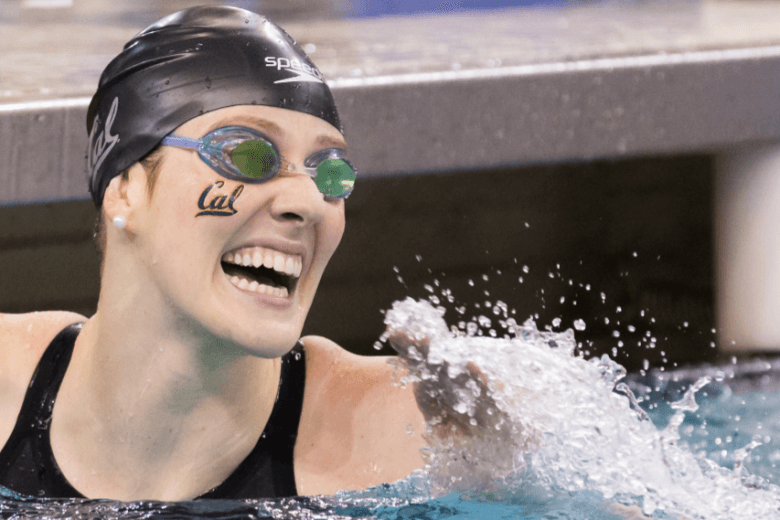 An easy one to get right: Missy Franklin was the consensus #1 recruit, and the Golden Bear lived up to the hype. But how did the rest of our 'top 10 recruits' list hold up? Archive photo via Tim Binning/TheSwimPictures.com

With the 2013-2014 NCAA Championships in the rear-view mirror, it’s time to look back at the season and pick out some of the big trends that characterized this season and will likely impact the college swimming landscape moving forward.

As with the men’s meet, we’ll begin our “5 Big Things” analysis with a look back at our recruiting rankings, laid out in this post from all the way back in July of 2012. (For some reference on how far back this was, check out the headline photo of a freckled, braces-sporting Missy Franklin from her Colorado Stars days). The swimmers who had just finished up their junior seasons of high school at that point are now putting the wraps on their rookie NCAA campaigns, offering a good chance to see how our “Top 10 Recruits” did with the college transition.

We should note that our recruiting rankings only include American prospects – it’s tough to predict what years and semesters foreign prospects will be making the trip across the border so it’s difficult to include them in early recruiting lists.

While our men’s class was admittedly hit-and-miss with injuries and top-10 swimmers heading to other arenas like Division II, Junior College or dropping the sport all together, the women’s rankings were much more accurate a year and a half out from their first NCAA action. 9 of the top 10 ranked prospects garnered an NCAA invite, with 8 putting up points and all 10 scoring at the conference level.

Franklin, of course, was the star of the class, which was a prediction not terribly hard to make. Though expectations on the international superstar were sky-high, it’s safe to say the Coloradoan met them. Though Franklin wasn’t the 3-event winner some might’ve hoped for, she willingly jumped into some different races to help her team chase a title and still came home with three top-3 finishes including that blowout American record in the 200 free and a 500 free that also got under the old NCAA record.

Lia Neal lived up to the hype in the same way. Though her individual NCAA finishes weren’t Franklin-esque (only one top-8 finish for Neal), she still took home a national runner-up spot in the 100 free and won the 200 free B final. But Neal was most influential on the relays, where her gigantic splits powered up a Stanford team that made its living on the relay races. Neal swam on 3 of the 4 winning Cardinal relays, putting up the fastest splits on both sprint free teams.

Ranked 5th coming in, Georgia’s Olivia Smoliga probably put herself in the conversation for second-most-valuable freshman behind Franklin. Smoliga was one of just two freshmen to win a national title individually, and her 38 NCAA points helped Georgia run away with the team title.

Virginia’s Leah Smith turned out to be one of the best gets of the class, crushing big distance races and taking 3rd in the 1650 at NCAAs. Celina Li was a major player for Cal, making the championship final of both IM races. Though it was perhaps a disappointing season for the Golden Bears team-wise, Li and Franklin were both outstanding.

That thought leads us into the prospects who didn’t seem to meet expectations as freshmen. Cal’s third top-10 prospect was sprinter Kristen Vredeveld, ranked #4 coming out of high school. Though Vredeveld didn’t have a terrible season, she definitely didn’t turn into the relay piece she was projected to be. Vredeveld added six tenths in her 50 free and almost a second and a half in the 100, missing an NCAA invite and scoring just 4 points at the Pac-12 Championships. In hindsight, there were some warning signs – Vredeveld set lifetime-bests in her best races as a high school sophomore, and hung onto her #4 ranking in 2012 despite missing those times as a junior. She failed to drop time again as a senior (the year after these ranks were published), and after missing lifetime-bests as a college freshmen, Vredeveld is now three full years removed from her best times in the 50, 100 and 200 frees.

Ranked #3 in this class originally, breaststroker Emily Cameron was a mixed bag at Georgia as a freshman. Though her best potential seemed to be in the sprints, Cameron gained a half-second in her 100 breast this season. On the other hand, Cameron cut over three seconds off her 200 breast over the course of the season and snuck out an NCAA invite in that event, though she wasn’t able to score at the meet. Cameron did score in the tough SEC in both breaststroke races.

Between the Franklin tier and the Vredeveld tier are the last three swimmers, who  had pretty typical freshman seasons, putting up big points at the conference level, but not quite finding the speed to break through with double-digit points at the national level. USC’s Chelsea Chenault gained some time in her 500 free, but seemed to respond well to the vaunted Trojan sprint program, cutting time in her 200 free and putting up some solid relay swims at NCAAs. Rachel Zilinskas had the biggest single drop of any of these freshmen percentage-wise (as shown in the table at the bottom of the page), cutting well over three seconds in the 200 back, and she scored in all three events at NCAAs, though they were all low B-final finishes. Virginia’s Kaitlyn Jones didn’t drop in either of her top events, but still took 10th in the 200 IM and shows some real promise for the Cavaliers moving forward.

By and large, the top tier of women’s prospects translated extremely well from high school talents to big-time college contributors. Outside of these 10, we found only 4 other American freshmen who scored individually at NCAAs:

Then, of course, there were the foreign swimmers who impacted the NCAA Championships. As we mentioned earlier, putting foreign athletes into recruiting rankings can be difficult in that it becomes more of a guessing game as to when a specific athlete will arrive in the states than a predicition of how they’ll fare once they’re there.

Because of that, we don’t include them in recruiting rankings. But there were still some freshman imports worth noting this season: South African Marne Erasmus took third in a loaded 100 fly field after joining SMU at the semester break. Farida Osman was another of Cal’s big-name prospects, and the Egyptian Olympian was a key relay piece as well as an 8th-place finisher in the 100 fly.

Tara-Lynn Nicholas, another South African SMU Mustang made the 100 breast A final. Dutch national record-holder Kira Toussaint was a point-scorer in both backstrokes for Florida Gulf Coast, and Arizona’s Tjasa Oder came home top 8 in the mile in her debut season from Slovenia.

As we did in the men’s post, we’ve included a chart of the top-10 ranked recruits with some data on each, including conference points scored, NCAA points scored, relay contributions and improvement percentages from their high school bests.

Though very interesting, I think it might be worth following up on in a year, specifically checking on the girls and guys that “didn’t get it done”. For some, transition from one program to another that might be very different than how they’ve trained for the last four years could be at work. Also interesting to see if there will be a sophomore slump or these other freshman will continue to rise.

Very interesting! I agree it would also be interesting to see an analysis of sophomores. Seems that many at Cal had a “sophomore slump.” Hope they get their groove back next year.

I would like to see external factors like their college majors included. They went from eat-sleep-swim to eat-sleep-swim-STUDY. Some majors are more demanding. Mental factors play a huge role in success, including distance from home as there is a life-adjustment the first year.