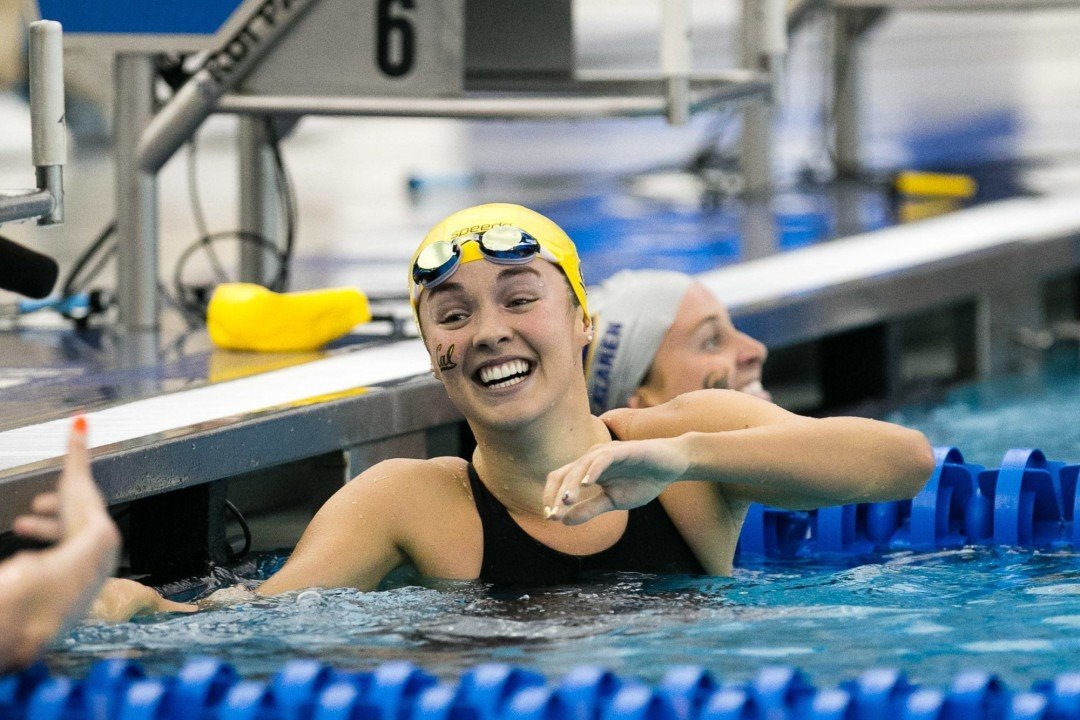 Last season, Bootsma and Bartholomew were the only 2 women under 51 seconds. This year, we've already seen 6 women under that mark in the lead up to NCAAs, led by newcomer Amy Bilquist. Archive photo via Tim Binning/TheSwimPictures.com

Last year at the NCAA Championships, Cal’s Rachel Bootsma was just .06 away from breaking Natalie Coughlin‘s NCAA, American, and U.S. Open Record set back in 2002. Bootsma won the event in 50.03, missing Coughlin’s 49.97 by less than a tenth. Though Bootsma was the NCAA champ in this event by half a second, Virginia’s Courtney Bartholomew came even closer to the record with a 50.01 earlier in the season. Now seniors, Bootsma and Bartholomew will return to make one last run at that record in the NCAA. This time around, they’ll be challenged by a ridiculously fast field of women’s backstrokers.

Last season, Bootsma and Bartholomew were the only 2 women under 51 seconds. This year, we’ve already seen 6 women under that mark in the lead up to NCAAs, led by newcomer Amy Bilquist. Bilquist, a freshman at Cal, made a huge drop in the 100 back to post a 50.50 in prelims at the Pac-12 Championships.

Behind Bilquist, Bartholomew is ranked 2nd in the 2015-16 season with a 50.55 from ACCs. She’s been consistently in the 50 second range at her mid-season meets, ACCS, and NCAAs since 2014. Bootsma enters the meet a couple of places behind Bartholomew. Her 50.74 from Pac-12 lands her 4th behind Pac-12 Champion Ally Howe. The Stanford sophomore is seeded 3rd with a 50.71.

At the 2016 SEC Championships, Olivia Smoliga and Kira Toussaint posted a pair of 50-second swims. Smoliga was a 50.80 to win the event. Toussaint, a transfer from FGCU to Tennessee, swam a 50.85 in prelims. Both women were in the championship final of this event at last season’s NCAAs.

Dark horse: NC State’s Alexia Zevnik cracked 52 for the first time this season to post a 51.37 at ACCs. She was 18th in this event a year ago, but comes into the meet as the 9th seed this season.

Hope to see another brilliant 100 back by ms. Bilquist. She has what it takes and the all important height.

Need to take into consideration who has shaved and tapered for their conference meets, and who hasn’t. I’m guessing the new coming freshmen were. Those with NCAA cuts were not. Also, the addition of the foot bracket is dropping times like crazy. They now have a secure place to put their feet to push off the wall without slipping. That’s where these incredible back starts are coming from. Working on unerwaters off walls has been huge to the time drops as well. Should be some excitng races to be sure!