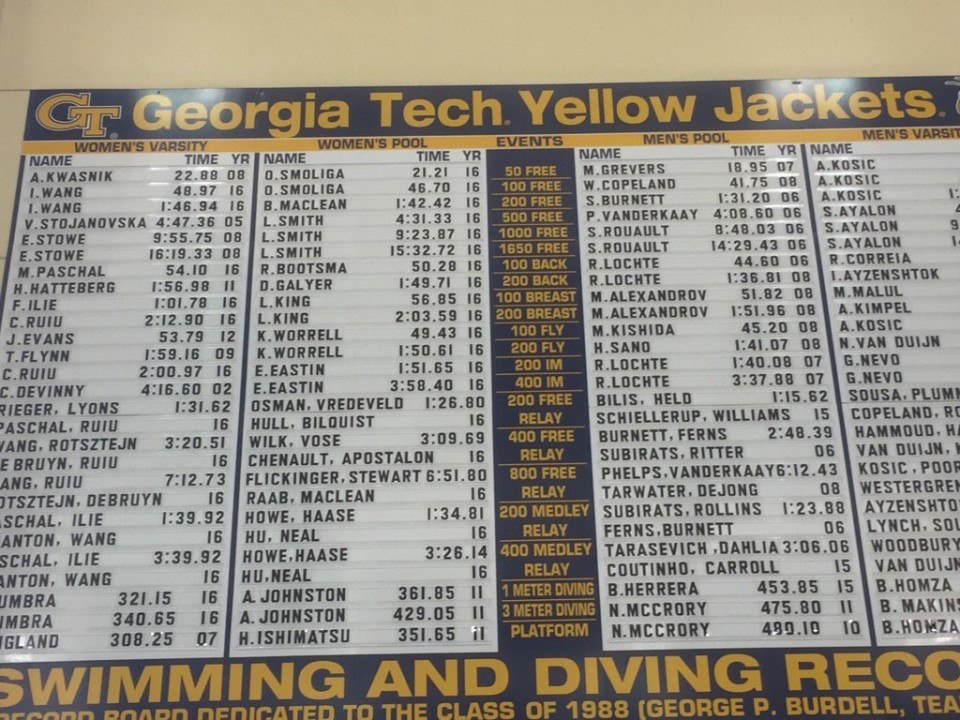 The Georgia Tech record board has already been updated to account for all of the fast swimming at the 2016 Women's NCAA Champs. Which men's records will go down this week? Current photo via Ray Looze

This past weekend at the NCAA Women’s Swimming & Diving Championships, every single pool record went down (excluding diving). Prior to the meet, we went event-by-event and predicted which records would go down, which could go down, and which probably wouldn’t go down.

The only event which we were pretty sure the pool record would stick was the 50 free. That was Natalie Coughlin‘s 21.46 from 2007. Georgia’s Olivia Smoliga had other ideas in finals, though, blasting a 21.21 for the 2nd-fastest time in history.

The NCAA women were remarkable this championship season. Leah Smith re-wrote three pool records in two swims (thanks to her 1000 split to the feet in her mile), Ella Eastin tore through the IM records, Kelsi Worrell the butterflies, Lilly King the breaststrokes, and Smoliga the sprint freestyles. Brittany Maclean couldn’t find her way to distance free records, but upset a big field to earn the pool record in the 200 free, while Rachel Bootsma took the 100 back and Danielle Galyer the 200 back, the latter becoming the first Kentucky Wildcat to win an NCAA title in swimming.

For relays, Stanford wrecked the medleys, while Cal, USC, and Georgia took down the free relay marks.

As we look to the men’s NCAAs this week, here are our predictions from November about which pool records will go down at the men’s meet. They’re a bit out-dated, and we overlooked Josh Prenot‘s relevance in the 200 breast, among other oversights.

But there is one similarity with the women’s predictions: only one record looks to be safe. For the men, it’s the 200 free, which is much further out of reach than Coughlin’s 50 free. Simon Burnett‘s 1:31.20 was simply a timeless swim, and we can say with as much confidence as you can in the sport of swimming that this record is going to stay up.

That said, every other record is on high alert.

I think the only record on the men’s side that won’t fall is Simon Burnet’s 200 yard freestyle.