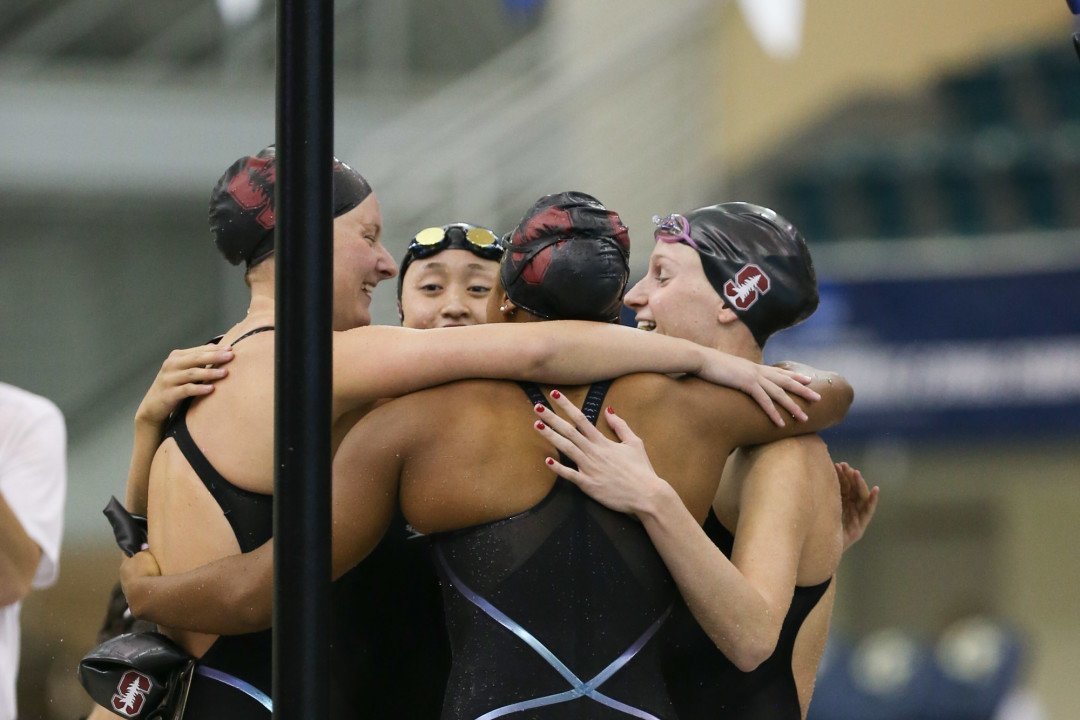 The Stanford Cardinal racked up 395 points to help push the Pac-12 total to 1,185.5 at the end of the women's NCAA meet. Current photo via Tim Binning/TheSwimPictures.com

At the men’s NCAA Championships, the University of Texas actually managed to single-handedly outscore the entirety of the Big Ten conference.

For the women, however, team champions Georgia finished with 414 points, a solid 250+ points behind the Big Ten conference combined.

While the SEC dominated the men’s meet, combining for over 1400 points which was well over DOUBLE what the 2nd place Pac-12 conference mustered up, it was a very different scenario on the women’s side. The Pac-12 and SEC were incredibly close for the women at their NCAA meet, separated by only 36 points.

The Pac-12 and SEC together, though, were incredibly dominant for the women. The top four teams, Georgia, Stanford, Cal, and Texas A&M, belong to these two power conferences. USC (6th) also reps to the Pac-12.

Next up was the ACC, led by 5th place Virginia and 8th place Louisville, along with 9th place North Carolina State. The Big Ten and Big 12 rounded out the “power” five conferences, with the Big Ten being led by Indiana and Michigan and the Big 12 by Texas.

Notably, at both the men’s and women’s NCAA meets, 13 different conferences scored.

While the SEC men showed up big-time, the Pac-12 women get the nod for most impressive NCAA performance. Though their points lead over the SEC was slim, the Pac-12 gobbled up the most points with only six teams scoring. The SEC had nine.

How about points by country? Could be interesting.

I think it would be interesting to take swimmers (on every team) and score them by their home state (i.e. CA, TX, FL, etc.). Just to see what the landscape would look like if swimmers went to a University in their home state only…

Naturally there would be some give and take for athletes from states without a major University level swim program.

I agree that this analysis would be interesting, but for a different reason. I think it would demonstrate what states have club programs that foster success not only in high school swimmers, but continued success once those swimmers go to college.