With 2 Weeks Left, America Hones in on 2nd Qualifiers for Worlds Stroke 50s 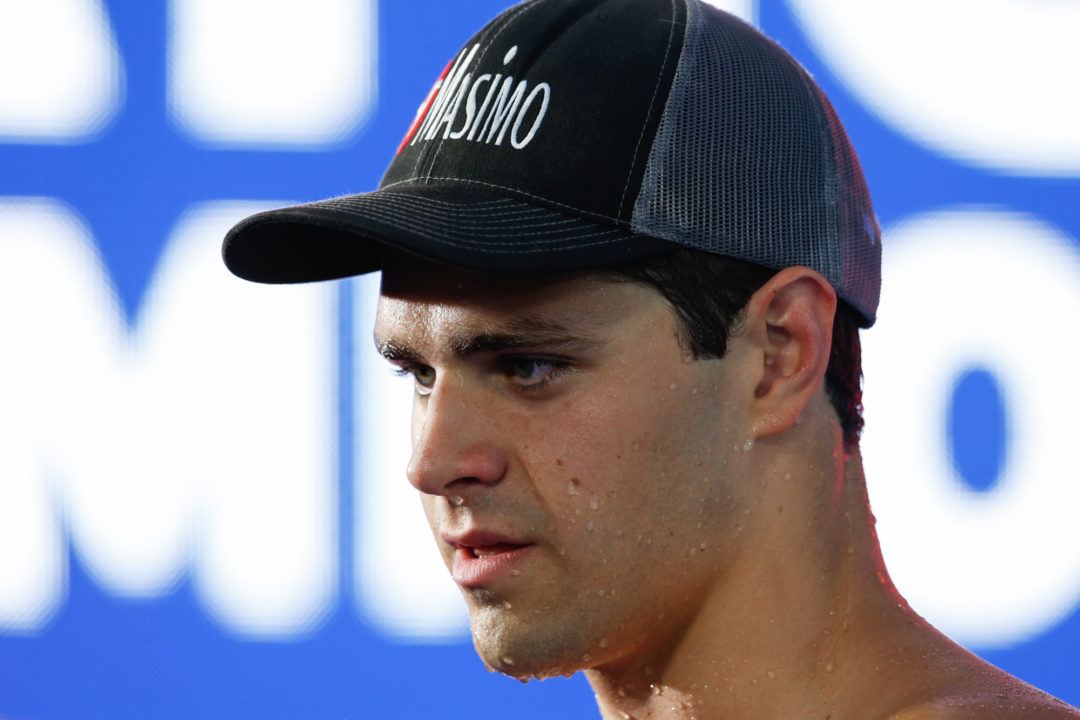 In the most-contested 50 stroke slot still up for grabs, Michael Andrew holds a narrow lead over Matt Grevers with 2 weeks to go in the qualifying period. Archive photo via Tim Binning/TheSwimPictures.com

Back in September, SwimSwam’s Jared Anderson laid out the criteria for selecting American swimmers to race the stroke 50s at the 2019 World Championships. You can read more about that here, but in short:

Later in the selection procedures, a process is laid out for filling a vacant entry spot in non-Olympic events:

For the remaining four events, we’ll go through the swimmers who currently hold the top time over the qualifying period – selection criteria don’t specifically say that the event has to stay vacant until June 1. USA Swimming told SwimSwam in September that decision would be made between now and June.

In short, the Americans don’t currently have a 2nd option to join Lilly King in this event at Worlds, because King is the only swimmer currently on the roster that has a FINA “A” cut during the qualifying period (and in order to send 2 swimmers in an event, both swimmers must have the “A” cut). That leaves the Americans with 2 options: either add a swimmer to the roster, or hope that Melanie Margalis goes wild in the 50 breast at an approved FINA meet in the next 2 weeks. She’s been 32.14, and the FINA “A” cut is 31.22.

This could very-much become a “cut off their nose in spite of their face” scenario for the Americans: Hannis’ 29.73 would have won bronze at Worlds in 2017. This is a scenario where the Olympic hyper-focus by the selection procedures could cost Team USA a probable, or even likely, medal at Worlds.

This is another scenario where the Americans don’t technically have a viable 2nd option. The closest to hitting that is Mallory Comerford, who swam a 26.50 tapered at the Brazil Trophy in April, where the “A” cut is 26.34. It took a 25.73 to make the final and a 25.39 to medal in this race at Worlds in 2017.

Comerford is swimming the race in Bloomington this weekend. A potential darkhorse to qualify for this event, 16-year old Regan Smith will race it in Bloomington as well. She’s already on the roster, so would be eligible if she hit 26.34.

The US National runner-up Justin Ress didn’t qualify for the team in anything else, so he’l lbe going to the World University Games instead, where he’ll probably get to swim more races anyway the 2nd spot here is opened up for bids.

This spot is, in effect, down to Michael Andrew and Matt Grevers. With Grevers not participating at this week’s Pro Swim Series meet in Bloomington (where Michael Andrew is entered to race), his options to drop those last 4-hundredths of a second and take the 2nd spot here are thinning.

Both stories would be intriguing. The 34-year old Grevers has won medals in the 50 back at each of the last 3 editions of the long course World Championships (bronze in 2017, silvers in 2015 and 2013). Meanwhile, the 20-year old Andrew already has entries in the 50 free, 50 fly, and 50 breast, and has stated a goal of being the best at all four 50 meter events in the world, which would be a pretty incredible feat. If he added this entry, he’d at least have a shot at achieving that at Worlds. That would also give Andrew a 5th individual entry at Worlds, which would bump him ahead of a tie with Katie Ledecky, Kathleen Baker, and Caeleb Dressel for the most individual entries on Team USA.

It seems possible, given relative proximity, that we see Grevers race at the FINA-approved Speedo Grand Challenge next week in southern California. So, this one is not set in stone yet.

The aforementioned Michael Andrew has the top spot in this race by way of his national title. Like the rest of the four scenarios, this one is unlikely to change this weekend in Bloomington, given that Wilson is the only swimmer on the team who has an “A” cut currently. The only other breaststroker on the roster is Josh Prenot, and he’s not racing in Bloomington this weekend (and doesn’t have a 50 breast in the qualifying period). Caeleb Dressel maybe could have stolen a spot on a perfect swim, but at this point, that too seems unlikely. Wilson will have to have a big swim, though, to make waves in this event at Worlds: it took 26.96 to final in 2017, and the men’s 50 breaststroke is evolving at a rapid pace. There’s a chance that he would decline the spot, even if earned, to focus on the 100 and 200.

Do you have to be on the current roster to make it in one of these events?

If you’re the national champion, you can go just based on winning the 50. Otherwise, yes, must be on the current roster.