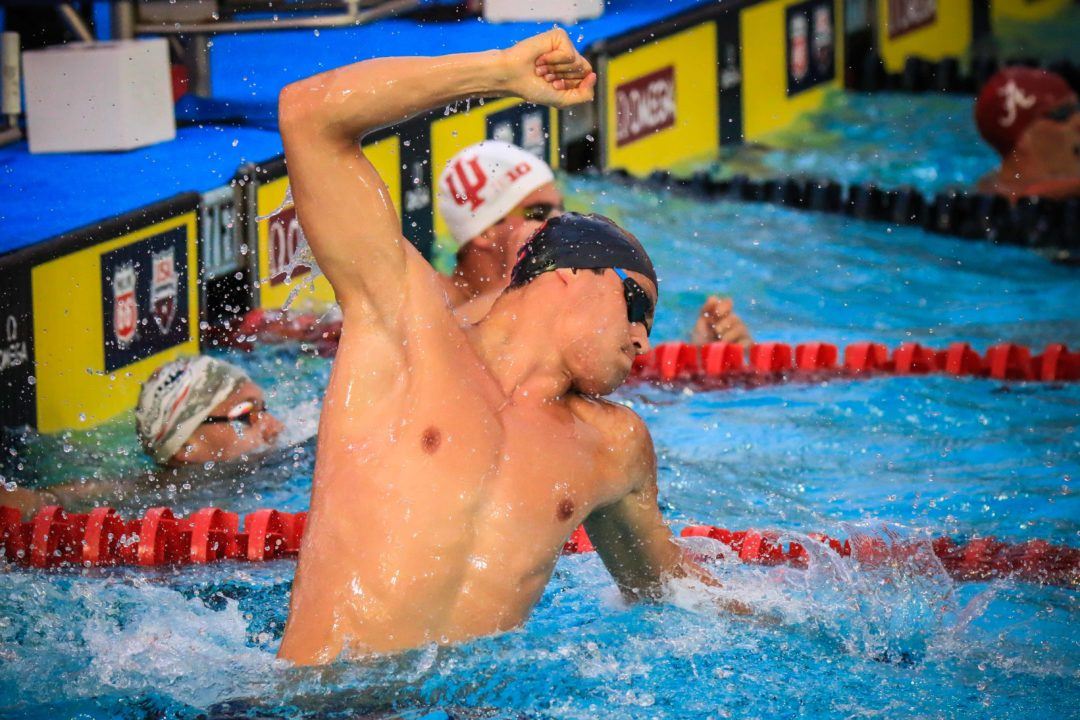 USA Swimming announced its full roster for the 2019 World Championships this week, but four entry spots are not yet decided. Those are the second entries in the 50 breaststrokes, men's 50 back and women's 50 fly. Let's dig through selection procedures to look at the frontrunners for the spots. Archive photo via Jack Spitser

Two-time US Olympian Cammile Adams is one of three swimmers on the ballot for a seat on USA Swimming’s Board of Directors this weekend.

USA Swimming announced its full roster for the 2019 World Championships this week, but four entry spots are not yet decided. Those are the second entries in the 50 breaststrokes, men’s 50 back and women’s 50 fly. Let’s dig through selection procedures to look at the frontrunners for the spots.

You can look back at official selection procedures here. We’ll break them down in more simple English below:

Later in the selection procedures, a process is laid out for filling a vacant entry spot in non-Olympic events:

The overarching FINA rule that governs all of this is that if a nation enters two athletes in an event, both athletes must have the FINA A cut. That’s not yet the case for the next-best options in a few of the stroke 50s, so filling the second entries will require an A cut swim during the coming season from at least one member of the 2019 Worlds roster.

For the remaining four events, we’ll go through the swimmers who currently hold the top time over the qualifying period – selection criteria don’t specifically say that the event has to stay vacant until June 1. USA Swimming told SwimSwam the decision would be made between now and June.

With Katie Meili bowing out of the team due to law school, none of the top 25 swimmers in national rankings over the qualifying period are already selected to the Worlds roster. Melanie Margalis (32.14) is the highest-ranked swimmer, but would need nearly a full-second drop from that time to reach the A cut. Micah Sumrall is the only other breaststroker on the roster and could make the A cut by matching her lifetime-best 31.00. But she hasn’t even swum the event since 2016 and needs to put up an official swim in the qualifying period to take the entry spot.

Comerford is about three tenths off the FINA A cut, but should be in the mix for the spot if she can hit a fast time this season. Katie McLaughlin (26.75 last season) is also a top option. Neither swam the 50 at Nationals, so they almost-certainly have more in the tank than their in-season times show. Both are competing at the college level this season and will spend a lot of time racing and training in short course, so deciding this spot may come down to Winter Nationals appearances or may have to wait until after the NCAA season wraps up in March.

With 2017 National champ Ress out of the mix, it probably comes down to Andrew or Grevers here. Both already have A cuts and are already on the roster. Andrew put up his 24.49 at the World Cup in Kazan and could further cement his lead with another big swim at the next long course tour stop in Doha. The only other true backstroker on the roster is Jacob Pebley, and he’s much more of a 200 threat.

Andrew has the first entry here, and Andrew Wilson is the favorite for the second entry. The only other individual breaststroker on the roster is Josh Prenot, who is much more geared for the 200. The sneaky threat is Caeleb Dressel, though. He went 27.89 at an in-season meet where he was also just 23.6 in the 50 fly, 22.1 in the 50 free, 49.5 in the 100 free and 52.4 in the 100 fly. Even swimming through injury, Dressel went significantly faster in all those events at Nationals (.7 faster in the 50 fly, .5 in the 50 free, 1.4 faster in the 100 free and 1.9 faster in the 100 fly). He’d need a massive swim this season to earn the second entry, but no one really doubts that the former American record-holder in the short course 100 could make a charge if he wanted to.

Can a halfway split for a 100 count as an official time for qualifying purposes?

Just throw a dart at a board and take whoever it lands on. This is too convoluted.

Did Dressel ever break the 100 breast record in SCY? I don’t think he did and the end of the article implies he did.

He did, at the SEC Championships. Ian Finnerty then broke it a few weeks later.

Someone has been hibernating

Yea lol. My namesake was born after that race.