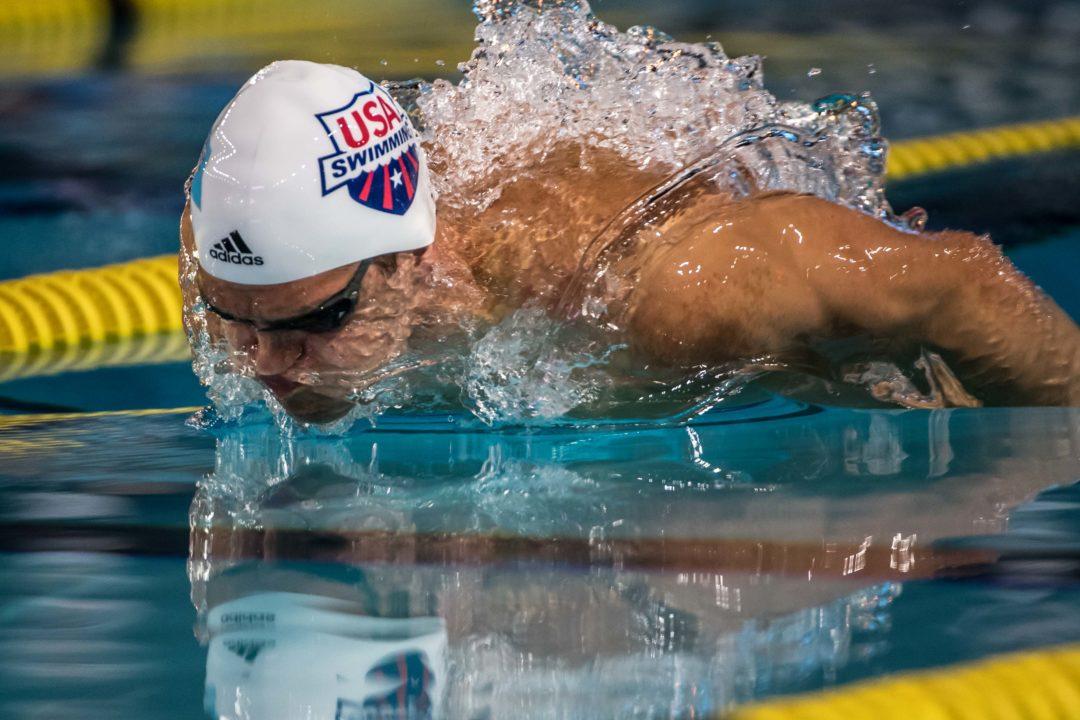 In prelims, Andrew took 3rd in the event with his 1:44.27, which would have pitted him against fellow junior star Reece Whitley in the final. Archive photo via Mike Lewis/Ola Vista Photography

The 2017 U.S. Winter Nationals continues tonight in Columbus, Ohio with finals of the 500 free, 200 IM, 50 free, and 4×100 medley relay. Among the big scratches for day 2 finals was junior standout Michael Andrew in the 200 IM. In prelims, Andrew took 3rd in the event with his 1:44.27, which would have pitted him against fellow junior star Reece Whitley in the final. However, Andrew also qualified 4th for the 50 free final, and has opted to focus on that race instead. Had he swum both during tonight’s session, he would have been racing in back-to-back events.

With the scratch, Cal’s Jacob Pebley was bumped up from 9th into the championship final. The Bears now have 3 in the final as he’ll join teammates Ryan Murphy and Josh Prenot.

Unless he’s injured. There should be no excuse for scratching…

He will probably try to win the 50 against Adrian

There’s a lot more on the line now for Andrew as he transitions to the Senior level. A national championship with Adrian in the pool would be a huge win for him. His prospects in the 200IM are significantly worse given the big names in that final, so I think his decision makes sense.

Exactly. He beat Adrian for #2 in the 50 LCM this summer, so I’m sure he’d like to prove it wasn’t a fluke. Also bet there’s an endorsement tie-in to a national championship win. Would not be surprised to see him go 18.9 this year, though he’ll probably be more like 19.2.

Schooling scratched the 200 IM at the Texas Invite. Can’t wait for MA to beat his 50 free time tonight.

You’ve made your position on Schooling pretty clear in Texas-related articles, but it seems unnecessary to drag him on every single post (even ones he has nothing to do with). It would be cool if both Andrew and Schooling swam well tonight but there’s no reason to knock one of them based on the other’s performance. They are not competing against each other this weekend and have different focuses throughout the season.

Joe Schooling must be mentioned in at least 50% of comment sections. Gotta keep them numbers up, ya know.

Hahaha sometimes I feel like we’re running closer to 75%

Considering they are both tight races and back to back, he is allowed to scratch. Commenters here beat on him for swimming every race at a major meet, now he chooses to scratch one, and you’re still beating on him.

They do that when he implodes on a race and has a concrete piano fall on him at 125m into a 200IM while claiming USRPT is effective for that event and doing more than one race per session. The multiple event sessions he does are mainly 50’s or a 50 and 100, where he usually does well and people acknowledge that. He is a pro swimmer and this is not a big meet for pros, he could have used it as an opportunity to test recovery or see how much raw speed he has after a longer event, like many other pros do