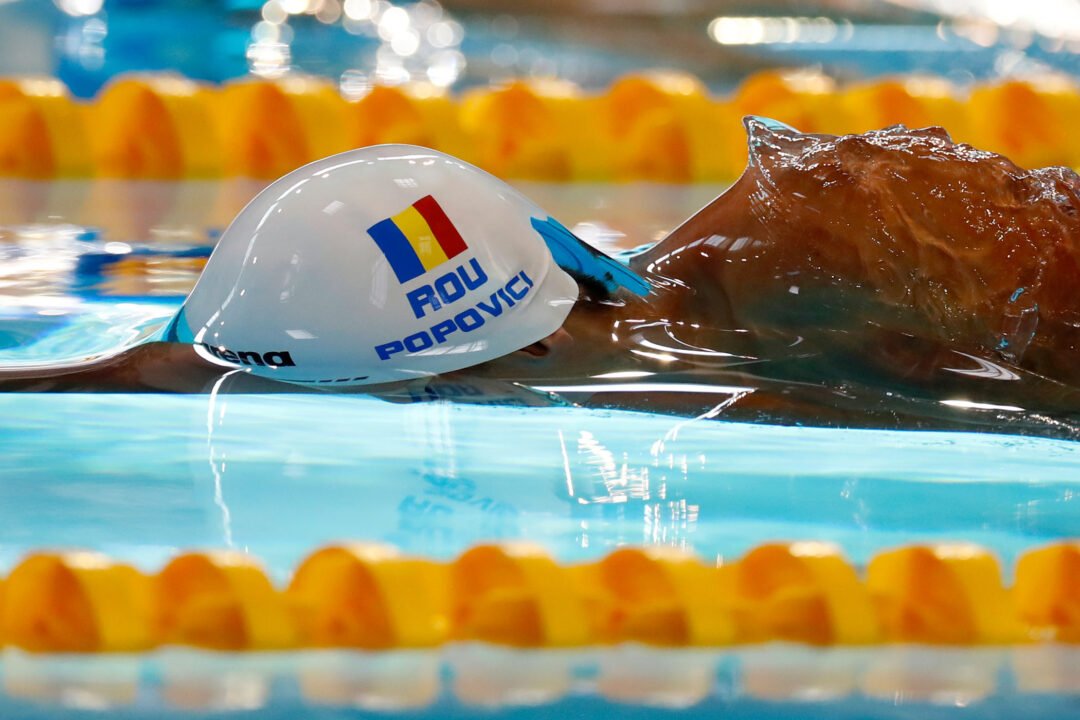 This marks a big step forward for Romanian swimming on the international stage, led of course by Popovici. Stock photo via LEN/Simone Castrovillari

Last night, we reported on David Popovici‘s 47.07 lead-off split on Romania’s boys 4×100 free relay at the 2022 World Junior Championships, which set his team up for gold in the event. Romania went on to swim a 3:18.84, touching as the only team in the field under 3:20. Popovici’s split was notable, but the Romanian gold made history for the country, which hasn’t experienced a ton of international success in swimming.

Romania’s gold medal last night marks their first relay medal of any color at a World Junior Championships. In fact, at many of the previous editions of the World Jr Champs, Romania didn’t even have relays competing. For example, at the 2015 World Junior Champs in Singapore, Romania only had 3 swimmers entered in the meet.

This marks a big step forward for Romanian swimming on the international stage, led of course by Popovici. That’s not to say Popovici is the only bright spot in Romanian swimming right now, either. Fellow 17-year-old Patrick Sebastian Dinu was excellent for Romania on the relay yesterday, anchoring in 49.47 in prelims, then 49.50 in finals. Don’t be fooled by the game-changing speed of Popovici, swimming under 50 seconds in the LCM 100 is still excellent for any junior swimmer. In fact, Dinu’s split in finals last night was the 2nd fastest in the entire field, behind only Popovici.

We published a deep dive on where Romania’s men’s relays could go on the international stage after Popovici broke the 100 free World Record a few weeks ago. In that post, we outlined Romania’s fastest men’s 400 free relay based on current personal bests. These were the results.

You’ll notice Dinu was listed on that hypothetical relay. After his 49.47 and 49.50 yesterday, we’ll be waiting to see whether the 17-year-old can crack 50 seconds in the individual 100 in a few days. If he were to do so it would be a great sign for Romania’s senior relay hopes.

With Popovici proving he can reliably lead-off relays in 47.0, if Romania could get to the point where they have a trio of 49-lows at the slowest, they’ll then be viable to qualify for finals on the world stage. At the 2022 World Championships 2 months ago, it took a 3:14.26 in prelims to qualify for finals in the men’s 4×100 free relay. Popovici’s 47.0 plus 3 49-lows would put them just outside of that.

All that being said, things are looking good for Romania as things stand now. We can’t forget that Popovici is only 17 years old, and as impossible as it seems, he may not be done improving yet. For all we know, he could become the first swimmer to go 45 in the 100 free. With Dinu also only being 17, there’s still plenty of time for him to improve as well. Glinta has been successful on the international stage, albeit in backstroke, but the 3 of them nonetheless make up a strong core moving forward.

It’s also worth noting that Romanian 14-year-old Aissia Claudia Prisecariu finished 4th semifinals of the girls 100 back yesterday in 1:02.59, becoming the #2 Romanian all-time in the event. She’ll be racing in finals tonight, where she could win another medal for Romania.

It would be a fantastic story, but I can’t see medals. Looking through squads and ages, I suspect the standard at the top of the 4×1 is going to explode heading towards Paris and then LA, so they’ll do very well to build a team that can make world/Olympic finals, and perhaps contend for ‘minor’ medals at Euros.

If I were Romania, I’m sending all my top young sprinters not named Popovici to the NCAA. If there is one LCM event that American college training seems to be perfect for, it’s the 100 FR. Florida, IU, NC State, and even Texas if Romanian Swimming agrees to pick up the bill, would do these kids wonders.

Or… you know… have them train with Popovici and his coach.

Cheaper to send them to America probably lol

Get those boys to the US and they should be contenders.

It might, but it will take time.. It is hard to compete with the big countries in relays. Besides having a much larger “pool” of swimmers to choose from, the conditions are much better from early on and there are a lot more prepared coaches at all age groups up to seniors.
The popularity of the sport in Romania has always been limited by the availability of the conditions to do the sport.. a thing that cannot be said about any of the countries that compete for a medal. Simply reaching the finals,at a world/olympic meet, would be an amazing performance..

I think what is more likely is that a lot of 8 year olds in Romania find a new sports idol in DP. They then find or focus on swimming. Think about all the kids in the US inspired by Phelps 08 run. Or South Koreans when Park was swimming lights out. Singapore after Schooling winning gold. Shining a spotlight on Swimming in Romania could be a huge part of DPs legacy.

Weird to talk about a 17 year old’s legacy, but we are witnessing something incredible!

Ironically, ten years after Australia’s major success in Sydney and the peak of Thorpe is when our swimming fell apart.

EXACTLY!
When you have ruinous headlines from the New York Times like this: https://www.nytimes.com/2013/02/23/sports/olympics/australian-swimmers-at-olympics-admit-to-taking-prescription-drug-and-making-pranks.html — is it any wonder that Swimming Australia has never really recovered, on the men’s side at least. When your own teammates cheer when you lost, as happened in the men’s 100 free @ 2012 London games, well that just breaks the bank.